Cathedral of the Blessed Sacrament, Christchurch

Cathedral of the Blessed Sacrament, Christchurch 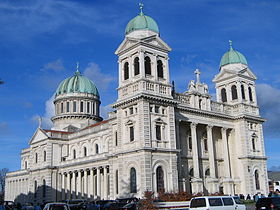 Cathedral of the Blessed Sacrament, Christchurch, F. W. Petre's largest completed work (pictured in 2005). The central pediment is in the style of Sebastiano Serlio.

Today the building, said by some to be based on the 19th-century Church of Saint-Vincent-de-Paul, Paris[2] is held to be the finest renaissance style building in New Zealand and the most outstanding of all Petre's many designs.[2]

Cathedral of The Blessed Sacrament, Christchurch, under construction. The nave is lined with Ionic columns.

A 24 feet (7.3 m) by 18 feet (5.5 m) wooden chapel was built on Barbadoes Street, south east of the city centre, in October 1860 for newly arrived Marist missionary priests. This chapel was replaced by a larger wooden church designed by Benjamin Mountfort in 1864, which was expanded over the years to become the Pro Cathedral of the newly established Diocese of Christchurch in 1887.

On 7 April 1983, the building was registered as a Category I heritage item by the New Zealand Historic Places Trust, with the registration number 47. It is regarded as an outstanding example of church architecture in Australasia, and is regarded as Petre's best design.[5]

At the instigation of Bishop John Grimes S.M., the first Catholic bishop of Christchurch, the old church was moved to Ferry Road and construction of a new cathedral began in 1901. The new cathedral was officially opened on 12 February 1905, a mere four years after construction began.

The architect Petre had previous experience in using concrete, designing dock walls and sewers as a draughtsman. This knowledge allowed Petre to use innovative methods during construction such as pouring heart walls with concrete and then facing with stone.[6] Mass produced components were widely used, including curved arches made in a purpose built moulding machine.[7]

The Cathedral, constructed of concrete sheathed in Oamaru limestone,[2] was widely acclaimed, causing the famous author George Bernard Shaw to describe Petre as a "New Zealand Brunelleschi". Fifty men were employed on the site, and in excess of 120,000 cubic ft (3400 m³) of stone, 4,000 cubic ft (110 m³) of concrete, and 90 tons of steel were used in the construction. Problems with finding suitable stone for the construction of such a large structure caused financial difficulties during the construction, and a special bill was pushed through parliament by then Premier Richard Seddon in order to aid with the financing of the building. The total cost to the Roman Catholic diocese was £52,000.

Interior of the Cathedral

Forsaking 19th century Gothic, Petre designed the new church in a Renaissance, Italian basilica style, with one major exception. Ignoring Renaissance convention, Petre obtained a greater visual impact by siting the Italianate green copper-roofed dome not above the cross section of the church (as in St. Peter's Basilica in Rome), but directly above the sanctuary. In Petre's opinion, this design element, coupled with the Byzantine apse, added extra grandeur and theatre to the high altar set in the tribune. The nave and chancel roofs were supported by colonnades of ionic columns and the entrance facade of the cathedral was flanked by twin towers in the manner of many of Europe's great renaissance churches.

While often likened to St Paul's Cathedral in London, it is conceivable that the greatest influence behind this structure was Benoit Haffreingue. During Petre's formative years, Haffreingue had been the driving force of the reconstruction of the cathedral of Notre Dame in Boulogne-sur-Mer, a French cathedral that has a very similar plan to that of The Blessed Sacrament, including the controversial siting of the dome over the altar rather than the centre of the cathedral. 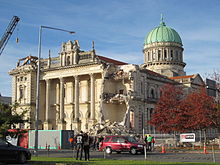 Damage from the 22 February 2011 earthquake.

The 2010 Canterbury earthquake a Richter magnitude 7.1 earthquake on 4 September 2010 resulted in the closure of the Cathedral to the public indefinitely, to allow for seismic strengthening and restoration. Masses were not celebrated at the Cathedral from the September earthquake, but took place at other nearby locations such as the chapel of the adjacent Music Centre. However, although his Requiem Mass was celebrated at St Mary's Pro Cathedral, Manchester St, Bishop Cunneen was buried in the Cathedral.[8]

The February 2011 Christchurch earthquake (22 February 2011), a Richter magnitude 6.3 earthquake, caused considerable damage to the Cathedral. The Cathedral administrator, Monsignor Charles Drennan, said that engineers had indicated that it was unlikely the building could be saved. The two bell towers at the front of the building collapsed, bringing much of the front façade down with them, with large blocks of masonry destroying vehicles in front of the building. There was also major cracking evident around the Cathedral's main dome. Stained glass windows, which had survived the 4 September earthquake and some 4,000 aftershocks, were also "in ruins". Monsignor Drennan said that workers repairing damage to the building caused by the earlier earthquake, escaped, as did a custodian who was in the Cathedral at the time.[9] Drennan told Kim Hill in a National Radio interview on 5 March that the screams of the children at the nearby school when the earthquake struck at nine minutes to one "will stay with him for a long time". He and other priests were having lunch when the violent shaking started and they dived under the table from where one of them watched the towers falling from the Cathedral.[10]

The building has been described as "quite humbled". On the collapsed front, "all that was left at the top was a cross piercing the sky – two angels abreast keeping vigil".[11] Msgr Drennan and three other priests were forced to evacuate the Cathedral Rectory by authorities. This was not because of any damage to that building, but because authorities wanted to clear the central city area of people for security reasons.[12][13] Adjoining parts of Catholic Cathedral College were threatened by the severely damaged Cathedral.[14]

On 2 March, Bishop Jones decided that the dome of the Cathedral would be removed after an inspection revealed another large earthquake could topple it completely. An engineer's report showed that the Cathedral's dome was forcing weight-bearing structures outwards and that another earthquake like the magnitude 6.3 on 22 February would topple the dome. The Bishop said that the removal of the dome would begin as soon as possible, but other work had to be completed and equipment assembled before work could begin. The removal of the dome will be done by cranes at a distance from the site because of the risk of collapse. The Bishop also said that no decisions would be made about the future of the building until a detailed engineering report was generated after the dome has been removed. Until the 22 February earthquake, Masses were being held at the Catholic Cathedral College assembly hall near the Cathedral, but the Bishop said he did not know where future services would be held. He said: "We don't know anything, all we're concerned about now is protecting human life."[3]

2011: A year after the quake, the cathedral - less its dome - is held up by shipping containers and haybales.

On 5 March, the Minister of Earthquake Recovery, Gerry Brownlee told a media briefing that if he had his way, most of Christchurch's heritage buildings would be demolished but that he would like to see resources go into rebuilding the ChristChurch Cathedral, the Catholic Basilica, the Canterbury Provincial Chambers and the Christchurch Arts Centre – "but that's it – There will be a few others perhaps, but those would be the most iconic buildings that Christchurch residents would want to see rebuilt. They won't be put back the way they were. They will need to have a great deal of strengthening put into them and it will be quite a long consideration as to how those things might be done."[15]