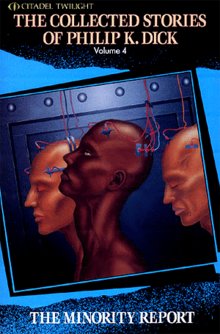 Cover of The Minority Report, the 4th volume of PKD's collected stories

"The Minority Report" is a 1956 science fiction short story by Philip K. Dick, first published in Fantastic Universe. The story is about a future society where murders are prevented through the efforts of three mutants who can see the future. Paradoxes and alternate realities are created by the precognition of crimes when the chief of police intercepts a precognition that he is about to murder a man he has never met. The story also touches upon the dangers of a powerful post-war military during peacetime. Like many stories dealing with knowledge of future events, "The Minority Report" questions the existence of free will.

In 2002, the story was adapted into a film directed by Steven Spielberg.

Founded thirty years prior to the story, Precrime is a system which punishes people with imprisonment for murders they would have committed, had they not been prevented. This method has replaced the traditional system of discovering a murder and its perpetrator(s) after the crime, then issuing punishment for a completed action. As one character says in the introduction to the story, "punishment was never much of a deterrent and could scarcely have afforded comfort to a victim already dead". Unlike the film adaptation, the story version of Precrime does not deal solely with cases of murder, but all crimes. As John Anderton (the initiator of Precrime) states, "Precrime has cut down felonies by ninety-nine and decimal point eight percent."

The system of predicting the future by reports is performed by three mutants known as "precogs" because of their precognitive abilities by which they can see up to two weeks into the future. The precogs sit in a room which is perpetually in half-darkness, constantly talking nonsense to themselves that is incoherent until it is analyzed by a computer and converted into predictions of the future. This information is assembled by the computer into the form of symbols before being transcribed onto conventional punch cards which are ejected into various coded slots: when cards are produced, they appear simultaneously at Precrime and the army general headquarters, in order to prevent corruption.[1]

Precogs are produced by identifying the talent within a "subject" and developing it in a government-operated training school — for example, one precog was initially diagnosed as "a hydrocephalic idiot" but the precog talent was found under layers of damaged brain tissue. The precogs are kept in rigid position by metal bands, clamps and wiring, which keep them attached to special high-backed chairs. Their physical needs are taken care of automatically and it is said that they have no spiritual needs. Their physical appearance is somewhat different from that of ordinary humans, with enlarged heads and wasted bodies. Precogs are deformed and retarded, "the talent absorbs everything"; "the esp-lobe shrivels the balance of the frontal area". They do not understand their predictions. Most of the data produced is useless for preventing murders and is passed to other agencies.

Each of the three precogs generates its own report or prediction. The reports of all the precogs are analyzed by a computer and, if these reports differ from one another, the computer identifies the two reports with the greatest overlap and produces a majority report, taking this as the accurate prediction of the future. But the existence of majority reports implies the existence of a minority report. In the story, Precrime Police Commissioner John A. Anderton believes that the prediction that he will commit a murder has been generated as a majority report. He sets out to find the minority report, which would give him an alternate future.

However, as Anderton finds out, sometimes all three reports differ quite significantly, and there may be no majority report, even though two reports may have had enough in common for the computer to link them as such. In the storyline, all of the reports about Anderton differ because they predict events occurring sequentially, and thus each is a minority report. Anderton's situation is explained to be unique because he, as Police Commissioner, received notice of the precogs' predictions, allowing him to change his mind and invalidate earlier precog predictions.

The existence of three apparent minority reports suggests the possibility of three future time paths, all existing simultaneously, any of which an individual could choose to follow or be sent along following an enticement (as in Anderton's being told he was going to murder an unknown man). In this way, the time-paths overlap, and the future of one is able to affect the past of another. It is in this way that the story weaves a complicated web of crossing time paths and makes a linear journey for Anderton harder to identify. It is the theory of multiple-futures which allows the precogs of Precrime to be of benefit, because if only one time-path existed, the predictions of the precogs would be worthless, since no possibility would exist of altering the future. Precrime is based on the notion that once one unpleasant future pathway is identified, an alternative, better one can be created with the arrest of the intended perpetrator.

Differences between short story and film