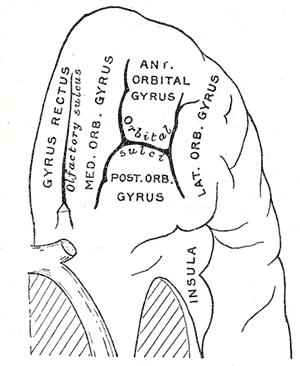 Caption2 = Orbital surface of left frontal lobe.
IsPartOf =
Components =
Artery = Anterior cerebral Middle cerebral
Vein =
Acronym = FL
BrainInfoType = hier
BrainInfoNumber = 37
MeshName = Frontal+Lobe
MeshNumber = A08.186.211.730.885.213.270
The frontal lobe is an area in the of s. It is located at the front of each and positioned anterior to (in front of) the s and above and anterior to the s. It is separated from the parietal lobe by the , which controls voluntary movements of specific body parts associated with the precentral .

The frontal lobe reaches full maturity around age 25, marking the cognitive maturity associated with adulthood. Arthur Toga, UCLA, found increased in the frontal lobe white matter of young adults compared to that of teens. Typical onset of schizophrenia in early adult years correlates with poorly myelinated and thus inefficient connections between cells in the fore-brain.

The frontal lobe contains most of the dopamine-sensitive neurons in the . The system is associated with pleasure, long-term memory, planning, and drive. Dopamine tends to limit and select sensory information arriving from the to the fore-brain. A report from the National Institute of Mental Health says a gene variant that reduces dopamine activity in the is related to poorer performance and inefficient functioning of that brain region during working memory tasks, and to slightly increased risk for .

The s of the frontal lobes involve the ability to recognize future consequences resulting from current actions, to choose between good and bad actions (or better and best), override and suppress unacceptable social responses, and determine similarities and differences between things or events.

The frontal lobes also play an important part in retaining longer term memories which are not task-based. These are often memories associated with emotions derived from input from the brain's limbic system. The frontal lobe modifies those emotions to generally fit socially acceptable norms.

In the early 20th century, a medical treatment for , first developed by Portuguese , involved damaging the pathways connecting the frontal lobe to the . Frontal (sometimes called frontal leucotomy) successfully reduced distress but at the cost of often blunting the subject's emotions, volition and personality. The indiscriminate use of this psychosurgical procedure, combined with its severe side effects and dangerous nature, gained it a bad reputation. The frontal lobotomy has largely died out as a psychiatric treatment.

Theories of frontal lobe function can be differentiated into four categories:
* Single-process theories. Posit "that damage to a single process or system is responsible for a number of different dysexecutive symptoms” (Burgess, 2003, p. 309).
* Multi-process theories. Propose “that the frontal lobe executive system consists of a number of components that typically work together in everyday actions [(heterogeneity of function)] “ (Burgess, 2003, p. 310).
* Construct-led theories. Assume “that most if not all frontal functions can be explained by one construct (homogeneity of function) such as working memory or inhibition” (Stuss, 1999, p. 348; cf. Burgess & Simons, 2005).
* Single-symptom theories. Suggest that a specific dysexecutive symptom (e.g., confabulation) is related to the processes and construct of the underlying structures (cf. Burgess & Simons, 2005)

Stuss (1999) suggests a differentiation into two categories according to homogeneity and heterogeneity of function.

It may be highlighted that the theories described above differ in their focus on certain processes/systems or construct-lets. Stuss (1999) remarks that the question of homogeneity (single construct) or heterogeneity (multiple processes/systems) of function “may represent a problem of semantics and/or incomplete functional analysis rather than an unresolvable dichotomy” (p. 348). However, further research will show if a unified theory of frontal lobe function that fully accounts for the diversity of functions will be available.

Damage to the frontal lobes can lead to a variety of results:
*Mental flexibility and spontaneity are impaired, but IQ is not reduced.
*Talking may increase or decrease dramatically.
*Perceptions regarding risk taking and rule abiding are impaired.
*Socialization can diminish or increase.
*Orbital frontal lobe damage can result in peculiar sexual habits.
*Dorsolateral frontal lobe damage reduces sexual interest.