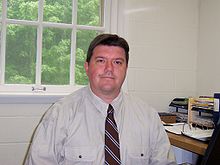 Carroll earned his BS (1985) in physics from NC State University (Raleigh, NC) and his PhD (1993) in physics from Wesleyan University in (Middletown, CT) with Dr. Dale Doering (thesis advisor). Carroll's thesis examined the thermodynamics of charged defects in complex oxide materials. As a postdoctoral associate for Professor Dawn Bonnell at the University of Pennsylvania (Philadelphia), Carroll worked on the application of scanning probes to size and dimension related phenomena in oxide supported metal nanoclusters. From there Carroll became a research associate at the Max-Planck-Insitut für Metallforschung (MPI) in Stuttgart, Germany under the direction of Professor Manfred Rühle. His primary research was on nanoscale phenomena at metal-ceramic interfaces using a combination of microscopy techniques.[2]

At the MPI Carroll first began working with carbon nanotubes and their variants. Specifically, Carroll was the first to identify the signature for one dimensional behavior in multiwalled nanotubes(the so called van Hove Singularities) as well as the signatures for defect states for those systems. This work helped to open the door to the use of scanning probe spectroscopies in understanding the electronics of low dimensional systems.[3]

In 1997 Carroll moved to Clemson University (SC) as an assistant professor where he received early promotion and tenure in the department of physics. While at Clemson he established a program in organic devices based upon carbon nanotube nanocomposites demonstrating enhanced lifetime and performance in organic light-emitting diodes (OLED) for the first time. This work was among the first to establish that nanotube-based nanocomposite systems could be used to enhance a variety of organic device performance metrics.[4]

In 2003, Carroll's group moved to Wake Forest University in Winston-Salem, NC to establish the Center for Nanotechnology and Molecular Materials. This move allowed the research team to expand its work into the fields of biomedical nanotechnologies and to continue their work in nanocomposite organic devices such as photovoltaics. Carroll's team continues to push the state-of-the-art in performance of organic solar cells, having set performance records twice in recent years. The nanotechnology center at Wake Forest currently holds the world record for the highest efficiency organic solar cell.[5]

Since becoming faculty, Carroll has published over 200 articles in scholarly journals. He has published 1 textbook on one dimensional metals, edited two books, written three book chapters, and holds 35 patents or patent filings. Carroll is a frequent speaker at international conferences with more than 100 invited talks in the past few years. He has been actively involved in four spin-off companies licensing or utilizing technologies from his labs.