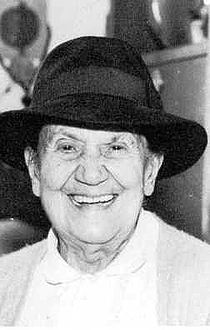 Desanka Maksimović (Serbian Cyrillic: Десанка Максимовић, pronounced [dě̞saːŋka mâksimo̞ʋit͡ɕ]) (May 16, 1898 – February 11, 1993) was a Serbian poet, professor of literature, and a member of Serbian Academy of Sciences and Arts.

Maksimović was born on May 16, 1898 in Rabrovica, near Valjevo, the oldest child of father Mihailo, a teacher, and mother Draginja. Right after her birth, her father was transferred, and they moved to Brankovina, where Desanka spent her childhood. She graduated from the gymnasium in Valjevo and the University of Belgrade Faculty of Philosophy.

In August 1933 she married Sergij Slastikov, but they had no children of their own. Maksimović was a professor of Serbian language from 1923 until 1953 in several schools. First, she was a teacher at the Obrenovac gymnasium, then she moved to the Third Female Gymnasium in Belgrade. Eventually, she was transferred to the teachers' school in Dubrovnik, where she spent one year. After that, she worked in First female gymnasium in Belgrade. One of her best students was Mira Alečković, who also became a poet and a close friend of Desanka Maksimović.

When she heard of German soldiers shooting primary school children in Kragujevac, she wrote "Krvava Bajka" (trans. "The Legend of Blood" or, more literally "A Bloody Fairy Tale"), a poem that speaks of the terror practiced by German army in World War II. The poem was not published until after the war had ended.

She traveled across Yugoslavia, and befriended writers and poets such as Miloš Crnjanski, Ivo Andrić, Gustav Krklec, Isidora Sekulić, and Branko Ćopić. 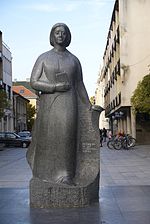 Her statue in Valjevo

Her poetry spoke about love and patriotism; it was enthusiastic and youthful, yet serious and sensitive. It is said[who?] that the Serbian language is best sung in the poems of Desanka Maksimović. Some of her best poems include: "Anticipation" ("Предосећање"), "Tremble" ("Стрепња"), "Spring poem" ("Пролећна песма"), "Warning" ("Опомена"), "In storm" ("На бури"), "I seek amnesty" ("Тражим помиловање"), "Sheared meadow" ("Покошена ливада") etc.

Maksimović won a number of literature awards among them Vuk Award, Njegoš Award (1984) and AVNOJ Award. She was elected as honorary citizen of Valjevo. In 1985, the primary school in Brankovina, where she began her education, was reconstructed. It was in this school that her father worked as teacher. Local people called it "Desanka's school", and that is now its official name. While she was still alive, a statue of her was built in Valjevo, although she objected to it. Because of the undying value of her poetry, Desanka Maksimović was elected on December 17, 1959 as an associate member of the Serbian Academy of Sciences and Arts (SANU), and on December 16, 1965 she became a regular member.

Most important works of Desanka Maksimović are (list in Serbian):