He is also the son-in-law of the Dutch national team manager, Bert van Marwijk. He served as the first non-German captain for FC Bayern Munich. During this period, he led the team to two Championship titles, and finished runner-up in the 2010 UEFA Champions League Final.

He won the 2006 UEFA Champions League Final with FC Barcelona and was part of the team that finished runner-up of the 2010 FIFA World Cup.

Mark van Bommel started his amateur career at local club RKVV Maasbracht before earning a professional contract with Fortuna Sittard in 1992. His other colleagues at Fortuna at that time who would later join PSV alongside him were Wilfred Bouma and Kevin Hofland.

Van Bommel was signed by PSV in 1999 where he formed a midfield partnership with Swiss international Johann Vogel. He won three Eredivisie titles and two Johan Cruijff Shield with the club. He was also named Dutch Player of the Year in 2001 and 2005.

In his final season with PSV, having assisted the team to the Dutch league title and a Champions League semi-final place, he was expected to join his father-in-law Bert van Marwijk who at the time managed the Bundesliga side Borussia Dortmund, but van Bommel opted to stay at PSV until the end of the 2004–05 season.

After the Champions League semi-final loss to AC Milan and with the Eredivisie title in PSV's hands at the end of April, he confirmed he would join FC Barcelona in May 2005 after the club won their own domestic league. 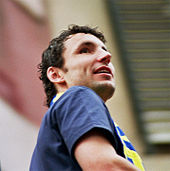 Seeking to strengthen his already title-winning squad, Frank Rijkaard signed van Bommel on a free transfer for Barcelona, the club that he had supported as a child.[1] Van Bommel spent the summer prior to his move to Spain learning Spanish in a convent in Eindhoven.[2] Similar to his role at PSV where he was largely used in a ball-winning midfielder, Rijkaard used van Bommel largely as an aggressive centre midfielder, utilising his ball-winning skills to complement the more skillful players already at the club.[1][2] As per his squad role, throughout the league campaign he was rotated with fellow midfielders Xavi, Edmílson, Andrés Iniesta, Deco and Thiago Motta, featuring in 24 domestic matches and a further 12 in cup competitions. His season with Barcelona was hugely successful as the club won La Liga and the 2005–06 UEFA Champions League. He won his third trophy with the club on 20 August 2006 as Barça beat city rivals RCD Espanyol in the 2006 Supercopa de España. Six days later, however, it was announced that van Bommel had joined Bayern Munich.[2]

On 26 August 2006, Bayern Munich team manager Uli Hoeneß announced van Bommel would be joining the Bavarian side. Media reports speculated that the move was influenced by the ongoing Owen Hargreaves transfer saga, but Hoeneß insisted the club intended to go forward with both players.[3] Bayern Munich paid 6 million euro to Barcelona in the deal.

Soon after joining the German side, van Bommel proved to be a key player for them, providing strength in the middle of the pitch. Due to his terrific performances during his first season at Bayern, he was voted the Bayern Player of the Year for the 2006–07 season, beating out long time fan-favorites Roy Makaay and Mehmet Scholl. After Oliver Kahn retired in 2008, van Bommel was selected as captain. He was the first non-German captain of Bayern Munich.[4]

On 25 January 2011, Van Bommel signed a six-month contract with Italian club Milan on a free transfer after terminating his contract with Bayern Munich.[5][6] He was given the number four shirt, and the day after, made his debut in a 2–1 victory against Sampdoria in the 2010–11 Coppa Italia quarter-finals leg. On 29 January 2011, Van Bommel made his Serie A debut against Catania Calcio, he was sent off after receiving a second yellow card early in the second half. Ever since however, he has adapted to Italian football and has become a regular in Max Allegri's squad, contributing greatly in convincing 3–0 wins against Napoli and city rivals Inter. He was a starter in the match against Roma on 7 May 2011. The match brought Milan their 18th Scudetto. On 17 May 2011, Milan announced that van Bommel extended his contract for 1 more year.[7]

His debut for the Dutch national team was on 7 October 2000 against Cyprus, which was won 4–0. However, for Oranje, he did not make an appearance in a major tournament until 2006, with the Dutch national team failing to qualify for the 2002 FIFA World Cup and injury preventing him from playing during UEFA Euro 2004 in Portugal. 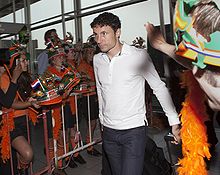 Dutch national team manager Marco van Basten was dissatisfied with van Bommel's defensive performance in the 2006 FIFA World Cup qualification match against Romania and he was subsequently not selected for the rest of the qualification series. With many Dutch football observers believing van Bommel's international career to be over, he was selected back into the Dutch side for the 2006 FIFA World Cup.

In the 2006 World Cup, van Bommel played in three of the games for his country (all except the match against Argentina, where both teams had already sealed their passage to the knockout stage of the tournament). He was substituted twice in these three matches. His position in the team was as right-half. His duties were mainly to play the anchor role in the Dutch three-man midfield in their usual 4–3–3 formation. 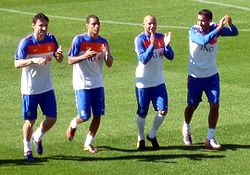 A notoriously hard tackling competitor, he was the first of many players booked in the second-round match Dutch team defeat against Portugal, dubbed "The Battle of Nuremberg" by the press. After the World Cup, van Bommel was not called up for the UEFA Euro 2008 qualifiers against Luxembourg and Belarus. In September 2006, after his move to Bayern, he was added to van Basten's squad to face Bulgaria; however, van Bommel stated (alongside Ruud van Nistelrooy) he would not play for Oranje as long as van Basten was in charge.[8] After van Basten left to manage AFC Ajax, new Netherlands head coach and father-in-law Bert van Marwijk called up van Bommel again, which led to his return in the Dutch national team. Van Bommel was part of the starting line-up in the Dutch team for the 2010 FIFA World Cup managed by Bert van Marwijk.[9]

Van Bommel was selected by father-in-law Bert van Marwijk to succeed Giovanni van Bronckhorst as the new captain of the Netherlands, despite initial claims he did not want to be the new captain, having been absent from the national team for two years.[10] He captained the side for the first time in a 5–0 away win against San Marino. Against San Marino Van Bommel captained the Dutch national team to a record breaking 11–0 victory in Eindhoven on 2 September 2011.[11]

Van Bommel is married to Andra, daughter of Bert van Marwijk, with whom he has three children: Thomas, Ruben and Renée.[14]