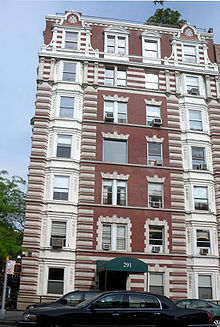 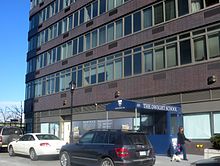 Founded in 1872 by Dr. Julius Sachs as part of the Sachs Collegiate Institute, The Dwight School was first known as “The Sachs School,” then The Franklin School. Originally located on West 34th Street and Broadway, it relocated several times as it grew, ultimately moving to 18 West 89th Street in 1912. Dr. Sachs, a noted educator and author (and brother of Samuel Sachs, who founded Goldman Sachs in 1882 with his father-in-law, banker Marcus Goldman,) headed the school until 1901, when he was appointed Professor of Education at Columbia University.[1]

The Dwight School merged with the Bentley School in 1977, in order to add elementary and middle school programs to its curriculum.

With the opening in fall 2005 of Dwight's Early Childhood Program, Woodside Preschool, the Dwight School' became the first school to offer the IB Primary Years Program for children ages three through five.

There are four co-educational divisions at The Dwight School: The Riverside Campus (preschool-kindergarten) occupies three buildings on Riverside Boulevard between 66th-68th Streets. The Lower School (grades 1-5) is located on the Main Campus and occupies a brownstone at 17 West 88th Street. The Middle School (grades 6-8) and the Upper School (grades 9-12), are also located on the Main Campus but primarily use the buildings at 18 West 89th Street and 291 Central Park West. In 2011, the school will expand to the adjoining brownstone located at 22 West 89th Street.

Within divisions, the grades are further separated into houses: Timothy House (grades 1-5), Bentley House (grades 6-8), Franklin House (grades 9-10), and Anglo House (grades 11-12). A dean oversees each house. An Executive Team of one principal and three vice principals manage the academic and pastoral areas of the school. The Principal works closely with the School’s Chancellor, who also oversees Admissions, the Business Office, Development, and Alumni.

Stephen H. Spahn has been the School’s Chancellor and Headmaster since 1967 and is the longest serving head of an independent school in New York City. Mr. Spahn serves on the Boards of the International Baccalaureate Fund and the Rubin Museum of Art. He was also a founding member of the Guild of International Baccalaureate Schools. Mr. Spahn holds a BA from Dartmouth College, where he was an All-American basketball player, Phi Beta Kappa, a Senior Fellow and an Intern at the United Nations under a 1926 Public Service Fellowship. He completed all course work for a Ph.D. at Wadham College at Oxford University and Columbia University where he was an International Fellow and a Woodrow Wilson Scholar before beginning his career as an educator. In 2011, Mr. Spahn was awarded the Lewis Hine Distinguished Service Award from the National Child Labor Committee.[3] The award, named for the acclaimed photographer who documented early 20th century exploitation of child labor, is presented to individuals in the public eye who have shown a strong commitment to improving the lives of children.[4]

The Dwight School Foundation, a separate 501(c)3 organization with an eighteen-member Board of Trustees, was established in 1967 to provide student financial aid, faculty professional development, and other enrichment to Dwight students and faculty.[5]

Admission to The Dwight School is highly selective. Kindergarten, sixth grade, and ninth grade are Dwight's largest entry points, with forty students entering kindergarten, fifteen entering sixth grade and twenty-five entering ninth grade. Each year, a smaller number of students are accepted in other grades. Dwight offers rolling admissions for international families due to the wide range of academic calendars around the world. The admissions process at The Dwight School is based on school reports, teacher recommendations, ERB/ISEE test results, and student/parent interviews.

The Dwight School's association with North London International School goes back over 40 years when Stephen Spahn, Chancellor of Dwight School New York opened the school. In 2008, what was known as Woodside Park International School was renamed as The North London International School (NLIS). NLIS is now one of the leading International Baccalaureate (IB) World Schools in the UK officially recognised to run all three IB programmes. In 2010, NLIS opened a partner school in London called The Holmewood School(THSL) which aims to provide specialist education for children of high cognitive abiltiy with difficulties associated with autism. In 2009, Dwight entered into the first joint diploma program in China with the Capital Normal High School, attached to Capital Normal University, in Beijing.[7] Through this program, each student receives a joint Capital Normal/Dwight School diploma with strong emphasis on English as a Second Language.[8]

In 2009, Dwight opened the Dwight International School (DIS), located on Shawnigan Lake on Vancouver Island, Canada.[9] DIS serves as a boarding school for up to two hundred students in grades six through twelve and is the only boarding school in Western Canada that offers both the IB Diploma Programme and the Ministry-approved BC curriculum. The first Leadership Academy through Dwight’s partner organization, the Institute for Civic Leadership (ICL), took place at DIS in 2010.[10]

In 2010, Dwight was chosen from 180 foreign schools by the government of Seoul, Korea, to open The Dwight International School Seoul (DISS) as a model IB School for five hundred forty students in grades K-12. The school, with an estimated value of $26 million, will be housed within a new multi-million dollar media and culture complex, Seoul’s Digital Media City, and will open in 2012.[6]

In 1996, Dwight became the second school in North America to offer all three International Baccalaureate (IB) Programs. Critical thinking, emphasis on oral and written communication, experiential learning, and leadership opportunity are central aspects of an IB education. The IB offers three programs of international education and, with them, the prospect of a continuous international educational experience from early childhood to pre-university age. Any school wishing to offer any of the International Baccalaureate Programs and attain IB World School status must first go through an authorization process, designed to ensure schools are well prepared to implement the programs successfully. The requirements for authorization are the same for all schools, even though the process is administered slightly differently in each IB region.

The IB Primary Years Program, for students ages 3 to 12, focuses on the development of the whole child as an inquirer, both in the classroom and in the world outside. Specific subjects taught at The Dwight School include Language Arts, Math, Second Language (Spanish or Mandarin), Physical education, Library/Technology, Art, and Music.

The IB Middle Years Program, for students in grades 6-10, encourages students to understand the connections between traditional subjects and the real world so that they may become critical and reflective thinkers. The program consists of eight subject groups integrated through five areas of interaction. Students are required to study their native tongue, a second language, humanities, sciences, mathematics, arts, physical education and technology. In the final year of the program, students engage in a personal project, which allows them to demonstrate the understandings and skills they have developed throughout the program.

The IB Diploma Program is designed as an academically challenging and balanced program that prepares students for success at university and life beyond. The program is normally taught over two years, in grades eleven and twelve, and has gained recognition and respect from the world's leading universities. Dwight offers over 30 advanced college level IB courses in the IB Diploma Program. To complete IB Diploma requirements, an independent 4,000 word Extended Essay (college level research) must be completed in a subject of the student’s choosing. All students must engage in 150 hours of experiential learning involving Creativity, Action & Service. Students in the IB Diploma Program pursue research or undertake independent projects through internships in local institutions, ranging from universities, businesses, museums and art galleries. A Certificate Program is available to students who do not wish to pursue the full IB Diploma Program and instead take some elective courses. Approximately half the graduating seniors receive the full IB diploma.

In 2001, The Dwight School founded the Institute for Civic Leadership (ICL), a non-profit organization whose mission is to ensure that students and faculty around the world who have become service leaders in their schools and communities are recognized for their leadership in civic engagement, given training to enhance their leadership skills, and provided with the resources to promote and sustain their endeavors. In 2011, the ICL received a $305,000 grant from the Alcoa Foundation to support the August 2011 Leadership Academy program that is held each year at Dwight’s Canada campus.

Dwight’s Visual and Performing Arts Department uses a professional model in an educational setting. The program provides students opportunities to perform and present their work several times a year in connection with professional arts in New York City, including a yearly music recital at Carnegie Hall. The Department includes the following four core areas: Visual Arts, Theater, Music, and Dance.

Head Boys and Head Girls Each May, several members of the junior class are chosen by a committee of Anglo House teachers to be a leader in the School during his/her senior year as a Head Boy or a Head Girl. A student must be a member of the National Honor Society to be eligible for this leadership position. A Head Boy/Head Girl is expected to work in conjunction with the Anglo House Dean and the Administration at various events throughout the year.

Honor Council The Honor Council of The Dwight School consists of a group of students elected by their peers to foster and maintain an atmosphere of mutual respect and trust among students and between students and faculty.

Notable Athletic Achievements
In 2004, fencer Kamara James ’02 represented the United States in the 2004 Summer Olympics and was ranked #1 in the U.S. for Women’s Epee.[11]

Dwight faculty member and fencing coach Lauren Willock is currently ranked 4thin the U.S. in Senior Women’s Epee and is a member of the U.S. National Team.[12]

In 2009, senior basketball player Mark Davenport was awarded the Diane Brennan Scholarship Award, given to two student-athletes who perform well both on the court and in the classroom.[13]