The line was initially planned to open in January 2010, but cost overruns and extended testing of trains and electronic signage forced three delays. 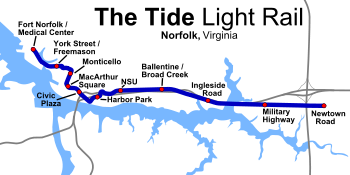 Since then, the City of Virginia Beach agreed to purchase the portion of the former Norfolk & Southern Railway right-of-way within Virginia Beach from Norfolk Southern. This line extends from the Norfolk/Virginia Beach boundary (near the end of the light rail line in Norfolk), continuing almost due east through the Pembroke Town Center area to Birdneck Road, ending very near the Oceanfront area of the resort city. However, no firm plans (e.g. for LRT, Bus Rapid Transit, or other uses) have been announced for the purchased right-of-way. Public transit advocates generally like the move.

After Virginia Beach pulled out of a proposal that would have seen the construction of a light rail line connecting Downtown Norfolk with the Virginia Beach oceanfront in 1999, Norfolk began developing a network that would be constructed entirely within its city limits.[3]

Beginning in 2000, HRT and federal transit officials worked to create a plan that would attract federal funding. On September 22, 2006, the Federal Transit Administration announced that the proposal met federal criteria for design, and would receive funding for a final design.[3] On October 1, 2007, the FTA signed the agreement to appropriate $128 million for the construction of the network.[4] The remainder of the project will be divided three ways, with the city of Norfolk contributing $33 million, the Commonwealth of Virginia contributing $31.9 million, and $39.2 million being contributed from other federal sources.[4]

Officials announced in June 2007 that the system would be called The Tide, a name that beat out other proposed names, including Bay Runner, First Rail, Dash, Bay Breeze, Sail and Shore Line.[5]

On 21 September 2011, Hampton Roads Transit announced the introduction of online ticketing and onboard WiFi to The Tide.[8]

The line was primarily financed by a $232 million grant from the Federal Transit Administration approved in October 2007.[9] Additional federal funding came from a $32.8 million grant from the American Recovery and Reinvestment Act.[9] The final cost of the project was estimated to be $318.5 million, $106 million over the original estimate.[7] Nevertheless, according to Norfolk mayor Paul Fraim, at a per-mile cost of less than $27 million per kilometer, The Tide ended up as if "not the lowest on a per-mile basis of any light rail, [...] at the very bottom of the list."[7] 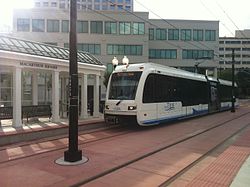 In September 2007, HRT’s commission voted to purchase nine Siemens-built S70 vehicles, similar to those currently in operation for the LYNX Blue Line in Charlotte, North Carolina.[4] These vehicles will form The Tide's initial fleet of light rail vehicles. The first car arrived on October 6, 2009.[10]

The Tide is designed with the hope that TOD (Transit-oriented development) will be constructed along the light rail line, creating a smart growth transit corridor to help guide growth using compact mixed-use development practices, as well as curbing traffic congestion.[citation needed]

Most of the Tide's route east of downtown Norfolk operates on newly-laid track along the former Norfolk & Southern Railway line that runs due east to the resort area of Virginia Beach. The Norfolk Southern Railway had previously abandoned that line. That right-of-way had carried both freight and passenger traffic until the end of World War II, and then operated as a freight-only railway for several additional decades. The current eastern end of The Tide is at Newtown Road, which is the Norfolk-Virginia Beach boundary line.

By contrast, The Tide's route from the Harbor Park area west within downtown Norfolk and north-west to the Medical Center area is entirely new right-of-way.

The Commonwealth of Virginia's Department of Rail & Public Transportation is studying possible extensions to The Tide in several different directions within the multi-city Hampton Roads area.[11]

Hampton Roads Transit, the Hampton Roads Transportation Planning Organization, and local cities are exploring extensions of the starter line. Possible extensions might run north to the Norfolk Naval Base, east to the Virginia Beach oceanfront and resort area, west to Portsmouth, and south to Chesapeake. 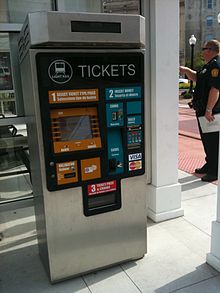 One possible extension would run south from Norfolk, probably terminating in the Greenbrier area of Chesapeake, VA.[11]

A second possible extension would extending The Tide from the Medical Center terminus to Naval Station Norfolk,[11] which would connect Old Dominion University to the light rail service. The naval base is one of the largest employers in the Hampton Roads area and ODU is a large public university.

This proposed LRT extension would continue along the former Norfolk & Southern Railway right of way. Major stops would be located at the "Town Center" project in the Pembroke area, near Oceana Naval Air Station, and would terminate in the resort area at the Virginia Beach Convention Center, a few blocks west of the Atlantic Ocean.[11] A possible spur would branch at the N&S Railway's Oceana Junction (just east of London Bridge Road and just north of Potters Road) and use the existing abandoned railway right-of-way along the west side of Oceana Naval Air Station to the south. As another possible LRT extension, most of the former N&S Railway line from the Witchduck Road area south to the Virginia Beach Municipal Center remains currently undeveloped.

There city of Virginia Beach may extend The Tide light rail service east from the Newtown Road terminus. Virginia Beach's mayor, Will Sessoms, said that the city hoped to purchase the right of way within two weeks. The city subsequently purchased the tracks for $40 million, using $10 million of local tax funds – which would allow a total rail length of about 18 miles. There are disagreements about the likely cost and the desirability of this proposed extension.

In the April 2011 State of the City, Sessoms said "whether the corridor is eventually developed with Bus Rapid Transit or a light rail line is unknown at this time," citing cost and ridership issues.[12]

In April 2011, HRT paused the study until 9-12 months of ridership data from The Tide light rail in Norfolk is collected. This will allow the travel forecasting model for any extension to be calibrated based on actual ridership. During this pause, HRT will work on improving the definition of the alternatives under study. After the data has been collected, HRT will restart the VBTES, currently anticipated in the third quarter of 2012. The study is expected to be completed by the end of 2013.

In January 2010, HRT's executive director, Michael Townes, was pressured by the Board of Directors and ultimately agreed to step down after the project overshot its budget by $100 million dollars and missed by one year its operational deadline. A majority of the board members cited poor management and communication on his part. He was to serve at full pay and benefits helping with a transition and continue to seek additional funding until September 2010, after which the Board agreed to a severance package of full pay and benefits for another full year. [13] As an interim measure, the Board hired former VDOT Commissioner Philip Shucet for 1 year affective February 1, 2010 at the rate of $40,000 per month to lead the agency, with a mandate to restore financial integrity and communication pending selection of a new Executive Director. [14]

In May 2010 elections, voters ousted Norfolk city council Randy Wright, a long-time incumbent, HRT board member, and light rail supporter. His opponent, also an advocate of light rail, cited the waste and delays under Towne's administration. Wright blamed "the Tide" for his defeat, stating "The cost overruns were the difference... I didn't know about the overruns and couldn't have, but people just didn't believe that." [15] Another HRT board member, Paige Washington, also lost a reelection bid in Hampton. News media sources reported that "Three million dollars [of HRT funds designated for projects on the Virginia Peninsula] were diverted to Norfolk to [help] pay for its light rail cost overrun" [16]