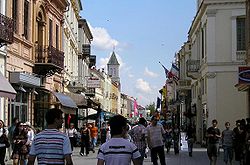 Mixed use residential and retail, pedestrian friendly street in Bitola, Republic of Macedonia.

Mixed-use development is the use of a building, set of buildings, or neighborhood for more than one purpose. Since the 1920s, zoning in some countries has required uses to be separated. However, when jobs, housing, and commercial activities are located close together, a community's transportation options increase. In addition, mixed-use developments often have higher property values. Often located in existing urban areas or as part of a new town center, mixed-use development provides a range of commercial and residential unit sizes and options.[1] In planning zone terms, this can mean some combination of residential, commercial, industrial, office, institutional, or other land uses. The concept of "mixed-use" as a discrete zone is predicated on the relatively recent practice of single-use zoning whereby different uses in different places are set by legislative mandate.

Throughout most of human history, the majority of human settlements developed as mixed-use environments. Walking was the primary way that people and goods were moved about, sometimes assisted by animals such as horses or cattle. Most people dwelt in buildings that were places of work as well as domestic life, and made things or sold things from their own homes. Most buildings were not divided into discrete functions on a room by room basis, and most neighborhoods contained a diversity of uses, even if some districts developed a predominance of certain uses, such as metalworkers, or textiles or footwear due to the socio-economic benefits of propinquity. People lived at very high densities because the amount of space required for daily living and movement between different activities was determined by walkability and the scale of the human body. This was particularly true in cities, and the ground floor of buildings was often devoted to some sort of commercial or productive use, with living space upstairs. 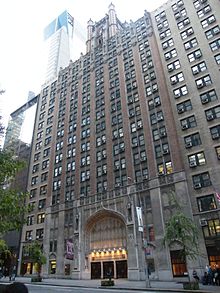 This historical mixed-used pattern of development declined during industrialisation in favor of large-scale separation of manufacturing and residences in single-function buildings. This period saw massive migrations of people from rural areas to cities drawn by work in factories and the associated businesses and bureaucracies that grew up around them. These influxes of new workers needed to be accommodated and many new urban districts arose at this time with domestic housing being their primary function. Thus began a separating out of land uses that previously had occurred in the same spaces. Furthermore, many factories produced substantial pollution of various kinds. Distance was required to minimize adverse impacts from noise, dirt, noxious fumes and dangerous substances. Even so, at this time, most industrialized cities were of a size that allowed people to walk between the different areas of the city.

These factors were important in the push for Euclidian or single-use zoning premised on the compartmentalization of land uses into like functions and their spatial separation. In Europe, advocates of the Garden City Movement were attempting to think through these issues and propose improved ways to plan cities based on zoning areas of land so that conflicts between land uses would be minimized. Modernist architects such as Le Corbusier advocated radical rethinking of the way cities were designed based on similar ideas, proposing plans for Paris such as the Plan Voisin, Ville Contemporaine and Ville Radieuse that involved demolishing the entire center of the city and replacing it with towers in a park-like setting, with industry carefully sited away from other uses.

In the United States, another impetus for Euclidian zoning was the birth of the skyscraper. Fear of buildings blocking out the sun led many to call for zoning regulations, particularly in New York City. Zoning regulations, first put into place in the 1916 Zoning Resolution, not only called for limits on building heights, but eventually called for separations of uses. This was largely meant to keep people from living next to polluted industrial areas. This separation, however, was extended to commercial uses as well, setting the stage for the suburban style of life that is common in America today. This type of zoning was widely adopted by municipal zoning codes.

With the advent of mass transit systems, but especially the private automobile and cheap oil, the ability to create dispersed, low-density cities where people could live very long distances from their workplaces, shopping centres and entertainment districts began in earnest. However, it has been the post-second World War dominance of the automobile and the decline in all other modes of urban transportation that has seen the extremes of these trends come to pass.

In the 1920s, the U.S. National Zoning Enabling Act of 1923 and a series of National Subdivision and Planning acts in English-speaking countries first set forth standards and practices of single-use zoning to be adopted by every municipality, which soon became the standard for all post-World War II development. These laws enforced and codified standards for modern suburban design as it is known today, which have been exported to many other countries through planning professionals and transportation engineers. The resulting bills progressively included restrictions on alleyways, minimum road widths, restrictions on cross streets for major arteries, buffer zones between separate areas, and eliminating mixed-use in all new developments, resulting in a moratorium on traditional urban development which remains in place in most areas that are not specifically zoned as "mixed use" or "general urban development", a common term for grandfathered urban areas. In addition, some existing urban areas commonly cited as mixed-use have been rezoned in such a way that, if demolished, they could not be rebuilt as such; for example, post-flood redevelopment areas in the 18th-century city of New Orleans.

Throughout the late 20th century, it began to become apparent to many urban planners and other professionals that mixed-use development had many benefits and should be promoted again. As American, British, Canadian and Australian cities deindustrialized, the need to separate residences from hazardous factories became less important. Completely separate zoning created isolated "islands" of each type of development. In most cases, the automobile had become a requirement for transportation between vast fields of residentially zoned housing and the separate commercial and office strips, creating issues of Automobile dependency. In 1961, Jane Jacobs' influential The Death and Life of Great American Cities argued that a mixture of uses is vital and necessary for a healthy urban area.

Zoning laws have been revised accordingly and increasingly attempt to address these problems by using mixed-use zoning. A mixed use district will most commonly be the "downtown" of a local community, ideally associated with public transit nodes in accordance with principles of Transit-oriented development (TOD) and New urbanism. Mixed use guidelines often result in residential buildings with streetfront commercial space. Retailers have the assurance that they will always have customers living right above and around them, while residents have the benefit of being able to walk a short distance to get groceries and household items, or see a movie.

Mixed use development is often seen as too risky by many developers and lending institutions because economic success requires that the many different uses all remain in business. Most development throughout the mid to late 20th century in the United States was single-use, so many development and finance professionals see this as the safer and more acceptable means to provide construction and earn a profit. Christopher B. Leinberger[citation needed] notes that there are 19 standard real estate product types that can obtain easy financing through real estate investment trusts. Each type, such as the office park and the strip mall, is designed for low density, single use zoning. Another issue is that short term discounted cash flow has become the standard way to measure the success of income-producing development, resulting in "disposable" suburban designs that make money in the short run but are not as successful in the mid to long term as walkable, mixed use environments. 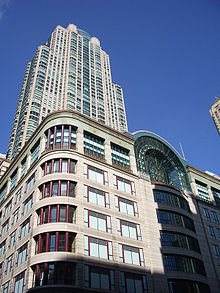 Mixed use commercial space is often seen as being best suited for retail and small office uses. This precludes its widespread adoption as the trend to ever-larger corporate and government employment accelerates.

Mixed use residential buildings and neighbourhoods seldom offer single-family homes, thus are best suited to residents who prefer public amenities to private space including a backyard or other private outdoor space. Street hierarchy and other traffic calming measures intended to serve such residential users may impede commercial traffic.[citation needed]

Additional costs arise from meeting the design needs: In some designs, the large, high-ceilinged, columnless lower floor for commercial uses may not be entirely compatible with the smaller scale of walled residential space above.

Single use developments are commonplace at high, medium and low urban density, but low density mixed-use ones are rare. Where density is high and transport is by automobile, parking space requirements (often mandated by the same subdivision act requirements that restrict mixed-use) are likely to exceed those of low density residential development, and the large number of parking spaces may be difficult to finance. Note that this is equally true for any other higher-density development remote from public transport; however, compared to residential zones, this may be a drawback due to higher initial investment required that only amortizes over the medium and long-term. On the other hand, in denser areas, owning an automobile might be considered a luxury rather than a necessity, especially where there is good public transport. Therefore, others argue that mixed-use neighborhoods need less parking space and are more efficient, if the authorities do not require generous parking (see Donald C. Shoup, The High Cost of Free Parking). Manhattan is an example of unusually high density leading to relaxation of standards in this matter.

Some mixed-use developments incorporate big-box stores, for example on Broadway in the Upper West Side, and others do not. Critics of traditional urban design maintain that modern consumers prefer the big box retailers, arguing that most grocery shoppers today would prefer the convenience of weekly shopping, as opposed to picking up each day's food items from a number of local shops. It is however not clear whether this phenomenon is the cause of attractive retailers or of zoning regulations that do not permit mixed-use development so that small shops are remote and, thus, inconvenient (see Jane Jacobs, The Death and Life of Great American Cities). Moreover, it may be argued that people prefer to shop with retailers because, due to single-use zoning, the local availability of goods through convenience commercial is limited. Where authorities are lenient, as in Time Warner Center, a large supermarket can be included.

Mixed Use Development in Asia