Annapolis, Maryland
"Annapolis" redirects here. For other uses, see Annapolis (disambiguation).
This article is about the state capital. For the unincorporated community in Howard County, see Annapolis Junction, Maryland.

Annapolis is the capital of the U.S. state of Maryland, as well as the county seat of Anne Arundel County. It had a population of 38,394 at the 2010 census and is situated on the Chesapeake Bay at the mouth of the Severn River, 26 miles (42 km) south of Baltimore and about 29 miles (47 km) east of Washington, D.C. Annapolis is part of the Baltimore-Washington Metropolitan Area. The city was the temporary capital of the United States in 1783–1784 and the site of the Annapolis Peace Conference, held in November 2007, at the United States Naval Academy. Annapolis is the home of St. John's College.

A settlement in the Province of Maryland named Providence was founded on the north shore of the Severn River in 1649 by Puritan exiles from Virginia led by Governor William Stone. The settlers later moved to a better-protected harbor on the south shore. The settlement on the south shore was initially named "Town at Proctor's," then "Town at the Severn," and later "Anne Arundel's Towne" (after the wife of Lord Baltimore who died soon afterwards). The city became very wealthy through the slave trade.

In 1654, after the Third English Civil War, Parliamentary forces assumed control of Maryland and Stone went into exile in Virginia. Per orders from Lord Baltimore, Stone returned the following spring at the head of a Cavalier force. On March 25, 1655, in what is known as the Battle of the Severn, Stone was defeated, taken prisoner, and replaced by Josias Fendall as Governor. Fendall governed Maryland during the latter half of the Commonwealth. In 1660, he was replaced by Phillip Calvert after the restoration of Charles II as King in England.

In 1694, soon after the overthrow of the Catholic government of Thomas Lawrence, Francis Nicholson moved the capital of the royal colony to Anne Arundel's Towne and re-named the town Annapolis after Princess Anne of Denmark and Norway, soon to be the Queen of Great Britain. Annapolis was incorporated as a city in 1708.

From the middle of the 18th century until the American Revolutionary War, Annapolis was noted for its wealthy and cultivated society. The Maryland Gazette, which became an important weekly journal, was founded there by Jonas Green[2][3] in 1745; in 1769 a theatre was opened; during this period also the commerce was considerable, but declined rapidly after Baltimore, with its deeper harbor, was made a port of entry in 1780. Water trades such as oyster-packing, boatbuilding and sailmaking became the city's chief industries. Currently, Annapolis is home to a large number of recreational boats that have largely replaced the seafood industry in the city.

Annapolis became the temporary capital of the United States after the signing of the Treaty of Paris in 1783. Congress was in session in the state house from November 26, 1783 to June 3, 1784, and it was in Annapolis on December 23, 1783, that General Washington resigned his commission as commander-in-chief of the Continental Army.

For the 1783 Congress, the Governor of Maryland commissioned John Shaw, a local cabinet maker, to create an American flag.[4] The flag is slightly different from other designs of the time. The blue field extends over the entire height of the hoist. Shaw created two versions of the flag: one which started with a red stripe and another that started with a white one.

In 1786, a convention, to which delegates from all the states of the Union were invited, was called to meet in Annapolis to consider measures for the better regulation of commerce; but delegates came from only five states (New York, Pennsylvania, Virginia, New Jersey, and Delaware), and the convention, known afterward as the "Annapolis Convention", without proceeding to the business for which it had met, passed a resolution calling for another convention to meet at Philadelphia in the following year to amend the Articles of Confederation. The Philadelphia convention drafted and approved the Constitution of the United States, which is still in force.

During this period, a prisoner of war Camp Parole was set up in Annapolis. As the war continued, the camp expanded to a larger location just west of the city. The area is still referred to as Parole. Wounded Union soldiers and Confederate prisoners were brought by sea to a major hospital in Annapolis.

View of Annapolis from the State House dome, 1911

To the north of the state house is a monument to Thurgood Marshall, the first black justice of the US Supreme Court and formerly a Maryland lawyer who won many important civil rights cases.

Close by are the state treasury building, erected late in the 17th century for the House of Delegates; Saint Anne's Protestant Episcopal church, in later colonial days a state church, a statue of Roger B. Taney (by W.H. Rinehart), and a statue of Baron Johann de Kalb.

Annapolis has many 18th century houses. The names of several of the streets—King George's, Prince George's, Hanover, and Duke of Gloucester, etc.—date from colonial days. The United States Naval Academy was founded here in 1845.

In the summer of 1984, The Navy Marine Corps Memorial Stadium in Annapolis hosted soccer games as part of the XXIII Olympiad.

Currently facing the many difficult challenges of American cities today, Annapolis is undergoing rapid low-density development along its edges, ever-increasing traffic congestion, as well as ecological destruction of the very bay that it depends upon. The 1998 Comprehensive Plan will soon be replaced with a new document, containing initiatives and directives of the city government on development and infrastructure. This process was mandated by Maryland state law in the Economic Growth, Resource Protection, and Planning Act of 1992. Annapolis Charter 300 and EnVISIONing Annapolis co-sponsored a public lecture series from September 2007 through June 2008 exploring these issues.

From mid-2007 through December 2008, the city celebrated the 300th Anniversary of its 1708 Royal Charter, which established democratic self-governance. The many cultural events of this celebration were organized by Annapolis Charter 300.

The Maryland State House is the oldest in continuous legislative use in the United States. Construction started in 1772, and the Maryland legislature first met there in 1779. It is topped by the largest wooden dome built without nails in the country.[7][8] The Maryland State House housed the workings of the United States government from November 26, 1783 to August 13, 1784, and the Treaty of Paris was ratified there on January 14, 1784, so Annapolis became the first peacetime capital of the US.

It was in the Maryland State House that George Washington famously resigned his commission before the Continental Congress on December 23, 1783.

The United States Naval Academy was founded in 1845 on the site of Fort Severn, and now occupies an area of land reclaimed from the Severn River next to the Chesapeake Bay.

Annapolis is the seat of St. John's College, a non-sectarian private college that was once supported by the state; it was opened in 1789 as the successor of King William's School, which was founded by an act of the Maryland legislature in 1696 and was opened in 1701. Its principal building, McDowell Hall, was originally to be the governor's mansion; although £4,000 was appropriated to build it in 1742, it was not completed until after the War of Independence.

Annapolis has a thriving community theater scene which includes two venues in the historic district. On East St. is Colonial Players, a company that produces approximately six shows a year on its small theater-in-the-round stage. From 1981 through 2008, Colonial Players produced a musical version of A Christmas Carol, which they commissioned. Feeling that the production had become stale, the holiday show was replaced with another play in 2009. Public reaction was unfavorable, and A Christmas Carol returned in December 2010. During the warmer months, Annapolis Summer Garden Theatre presents three shows on its stage, which is visible from the City Dock. All shows put on by King Williams Players, the student theater group at St. John's College, are free and open to the public. Annapolis is also host to The Bay Theater Company, a non-profit professional drama group. The Naval Academy Masqueraders put on several productions annually in Mahan Hall. 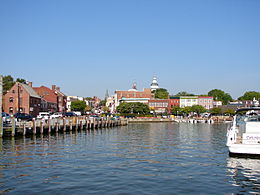 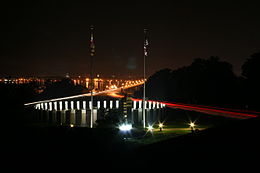 The Hammond-Harwood House is originally belonged to Matthias Hammond, and has now been restored. Tours are now offered.

The Kunta Kinte- Alex Haley memorial is located in downtown Annapolis, on the harbor. It commemorates the place of arrival of Alex Haley's African ancestor, Kunta Kinte. The story of Kunta Kinte is related in Haley's book Roots.

The Paca House and Garden encompasses an 18th-century Georgian mansion constructed by William Paca, a signer of the Declaration of Independence. The property includes a terraced garden that has been restored to its colonial-era design.

A number of structures are listed on the National Register of Historic Places.[9]

The Annapolis area was the home of a VLF-transmitter called NSS Annapolis,that was used by the United States Navy to communicate with its Atlantic submarine fleet. Annapolis often serves as the end point for the 3,000 mile annual transcontinental Race Across America bicycle race.

As announced by United States Secretary of State Condoleezza Rice, Annapolis was the venue for a Middle East summit, with the participation of Israeli Prime Minister Ehud Olmert, Palestinian President Mahmoud Abbas ("Abu Mazen") and various other leaders from the region. The conference was held on Monday, November 26, 2007.

The city is a part of the Atlantic Coastal Plain, and is relatively flat, with the highest point being only 50 feet (15 m) above sea level.

Annapolis lies within the humid subtropical climate zone, with hot summers and cool winters. Low elevation and proximity to the Chesapeake Bay give the area more moderate temperatures, with warmer winter temperatures and cooler summer temperatures than locations further inland, such as Washington, D.C. 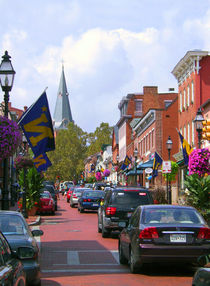 Whereas according to the 2010 U.S. Census Bureau:

There were 15,303 households out of which 24.5% had children under the age of 18 living with them, 36.6% were married couples living together, 16.3% had a female householder with no husband present, and 43.3% were non-families. 32.9% of all households were made up of individuals and 9.2% had someone living alone who was 65 years of age or older. The average household size was 2.30 and the average family size was 2.93.

According to the City's 2009 Comprehensive Annual Financial Report,[13] the top employers in the city, excluding state and local government, are:

Annapolis is the only capital city in America east of the Mississippi River without rail transport of any sort. From 1840 to 1968, Annapolis was connected to the outside world by the railroads. The Washington, Baltimore & Annapolis Railroad (WB&A) operated two electrified interurban lines that brought passengers into the city from both the South and the North. The southern route ran down King George Street and Main Street, leading directly to the statehouse, while the northern route entered town via Glen Burnie. In 1935, the WB&A went bankrupt due to the effects of the Great Depression and suspended service along its southern route, while the newly created Baltimore and Annapolis Railroad (B&A) retained service on the northern route. Steam trains of the Baltimore and Ohio Railroad also occasionally operated over the line to Annapolis, primarily for special Naval Academy movements. Passenger rail service on the B&A was eventually discontinued in 1950; freight service ceased in 1968 after the dilapidated trestle crossing the Severn River was condemned. The tracks were eventually dismantled in 1976.[15]

Annapolis is governed via the mayor council system. The city council consists of eight members who are elected from single member wards. The mayor is elected directly in a citywide vote.

On March 9, 2010, The Chesapeake Bayhawks of Major League Lacrosse moved from Washington D.C. to the Annapolis area, currently at Navy-Marine Corps Memorial Stadium. On August 22, 2010, the Bayhawks won the Steinfeld Cup for the third time.[22]

See also: List of newspapers in Maryland in the 18th-century: Annapolis

Annapolis is a sister city of these municipalities:[32]