Their sound has been described as drawing on pop rock, Latin pop, calypso, reggae and ska. They initially received international commercial success in Australia and Spain and have since gained popularity and exposure in the US, Western Europe, Asia, and the Middle East. Their worldwide sales stand at more than 25 million albums as of 2011.[1]

The group was formed in 1978 by José Fernando "Fher" Olvera (vocals) and Gustavo Orozco (guitars) along with brothers Juan Diego Calleros (bass guitar), Ulises Calleros (guitars), and Abraham Calleros (drums and percussion). They initially formed to play cover versions of songs by artists they admired. They called themselves the Green Hat Spies, but soon shortened this to Green Hat, and then, focusing on their Latin roots and Spanish-language repertoire, to Sombrero Verde (the Spanish translation of Green Hat).

In 1989, they released their first album called Sombrero Verde on the Ariola label. It included the singles "Vampiro," "Professor," "Long Time," and "Despiértate."

Their second album, a collaboration with Cisne Raff, was called A Tiempo de Rock and was released in 1983. Singles included "Laura," "Hechos Nada Más," and "Me Voy al Mar". 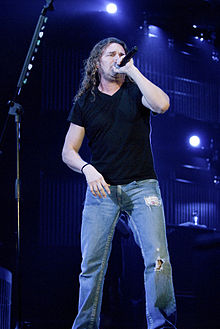 Unhappy with the direction their label Polygram Records was taking them, the group switched labels to Warner Music and released their first album on Warner in 1990 called Falta Amor. A year passed before the album garnered its first hit single, "Rayando el Sol". The group toured heavily in support of the album performing more than 250 times throughout Latin America, including shows in Mexico, Peru, Ecuador, and Colombia.

In 1991, they added two new members to the group, Iván González on keyboards and César "Vampiro" López on guitar. Ulises Calleros no longer performed with the group, but became one of their managers. On October 27, 1992, the band released ¿Dónde Jugarán Los Niños?, an album that spawned several hits (including "Vivir Sin Aire," "Oye Mi Amor," "Como Te Deseo"). The band undertook an international tour with 268 concerts in 17 countries.

In 1994, Iván González and César López left the group. Fher Olvera, Alex González, and Juan Calleros continued to perform as a trio and released a live album titled Maná en Vivo with the collaboration of Gustavo Orozco on guitar, Sheila Ríos on vocals, and Juan Carlos Toribio on keyboards.

In 1995, Sergio Vallín was brought in to replace López on guitar. The group released Cuando los Ángeles Lloran.

In 1997, the group released Sueños Líquidos, recorded in Puerto Vallarta and released simultaneously in 36 countries. The recording received a Grammy Award as Best Latin Rock/Alternative Album. They also released a retrospective album for distribution in Spain called Todo Maná.

In 1999, Maná recorded an album and DVD of acoustic performances, titled Maná MTV Unplugged, as part of the MTV Unplugged series.

In 2002, in an effort to blend their sound with that of rock and roll from the sixties and seventies, the band recorded Revolución de Amor. They won their fourth Grammy for the album. The band released a new version of “Eres mi Religión” for the Italian market in 2003, as a duet with Italian musician Zucchero, and also performed with Zucchero in a new recording of his "Baila Morena". This same year they participated in the annual Pavarotti & Friends concert, along with Queen, Deep Purple, Ricky Martin, Andrea Bocelli, Zucchero and Bono.

In 2006, after a four-year hiatus, they released their seventh studio album, Amar es Combatir. It reached #4 on the Billboard Top 200 in its first week, selling over 60,000 copies in the first week (according to Billboard.com). Their first single off the album, "Labios Compartidos", rose to the top of the music charts upon its debut in July, when the group played the song live at the Premios Juventud.

In April 2010, Maná announced on their Facebook page that they are working on a new album to be released on December 7, 2010. Mana later updated their website and announced that their upcoming album, "Drama y Luz" is set for a tentative February 2011 release. And for the third time on February 11, 2011 they announced that Drama y Luz would be release on April 12, 2011 after five years of waiting from their last album. On April 12, 2011, this album was released in three formats CD, CD with DVD, and 12" LP vinyl record.

Selva Negra Foundation ("Black Jungle Foundation") is a foundation that was formed by Mexican Latin rock band Maná in 1995,[2] with the direction of Mari González and Augusto Benavides[3] they finance and support important projects aimed at protecting the environment. Also with the support of Mexico's government in efforts to save the sea turtle by raising 140,000 turtle eggs for release on the country's Pacific coast. On April 7, 2008 Maná and the Selva Negra Foundation was named "Champion of Health" by the Pan American Health Organization during an observance of World Health Day 2008 at PAHO headquarters in Washington, D.C.[4]

On 29 March 2007, Puerto Rico's Channel 4, WAPA's News program, reported that Maná publicly supported Puerto Rico's prospective independence. In an interview that followed the aforementioned news announcement, the members of Maná were interviewed by Channel 4 (WAPA) journalist, Rafael Lenín López, who asked them what they thought about Puerto Rico. Maná members confirmed that they support the Puerto Rican Independence Movement and favor greater sovereignty for the Latin American and Caribbean island-nation.

Various of their songs have political inspirations. The liner notes for "Me Voy a Convertir en Un Ave," on the album Sueños Líquidos, for example, notes that the song is "inspired by the book Pedro y el capitán by Mario Benedetti and dedicated to all those who, for defending an ideal of justice, are persecuted or find themselves imprisoned. To the Zapatista Army of National Liberation communities for peace and dignity."[5]

The Food and Agriculture Organization of the United Nations FAO is a specialized agency of the United Nations that leads international efforts to defeat hunger. FAO was founded on October 16, 1945 in Quebec City, Quebec, Canada. The FAO Goodwill Ambassadors Programme was initiated in 1999. Maná was nominated and appointed FAO Ambassadors on October 16, 2003.[6] Maná emphasized that their song "Justicia, Tierra y Libertad" (in English: Justice, Land and liberty [freedom]) from the Revolución de Amor album, is a message of hope and inspiration in the search of a world without hunger; the song also appears in a Chevrolet commercial.