Mohotani (sometimes spelt Moho Tani; also called Molopu or Motane) is an uninhabited island southeast of Hiva Oa and east of Tahuata in the southern Marquesas Islands. It has an area of 15 km². Much of the island's sparse vegetation has been destroyed by feral goats and sheep, to the extent that following its rare rains, the sea around it is stained red from runoff. Early reports describs the island as fertile, with forrest and fields. When Thor Heyerdahl visited the island in 1938, there were only a few goats and remains of deserted huts and villages.

Mohotani is administratively part of the commune (municipality) of Hiva-Oa, itself in the administrative subdivision of the Marquesas Islands. 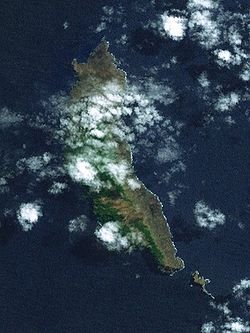 It is reported that at one time the island was inhabited by a clan called the “Moi a Tiu”, but that population has long since been wiped out by disease and war, the few survivors having departed for Hiva ʻOa. In pre-European times, the island was considered part of the territory of the province of Pepane.

In 1992, the island and its surrounding smaller islands (including Terihi) were officially protected by the declaration of the Motane Nature Reserve.