Droughts and famines in Russia and the Soviet Union

Droughts and famines in Russia and the Soviet Union 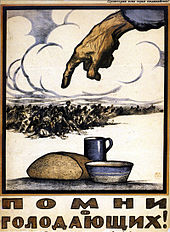 Remember Those Who Starve! A Russian poster from 1921.

Droughts and famines in Russia and the USSR tended to occur on a fairly regular basis, with famine occurring every 10–13 years and droughts every 5–7 years. Golubev and Dronin distinguish three types of drought according to productive areas vulnerable to droughts: Central (Volga basin, Northern Caucasus), and Central Chernozem Region), Southern (Volga and Volga-Vyatka area, Ural, Ukraine), and Eastern (steppe and forest-steppe belts Western and Eastern Siberia and Kazakhstan).[1]

The Golubev and Dronin report gives the following table of the major droughts in Russia.[1]

The first famine in the USSR happened in 1921-1923 and garnered wide international attention. It was mostly due to forceful confiscation of grain and other policies of the Soviet government [1]. The most affected area being the Southeastern areas of European Russia (including Volga area, or Povolzhye, especially national republics of Idel-Ural, see 1921-1922 Famine in Tatarstan) and Ukraine. Fridtjof Nansen was honored with the 1922 Nobel Prize for Peace, in part for his work as High Commissioner for Relief In Russia. Other organizations that helped to combat the Soviet famine were UISE (Union Internationale de Secours aux Enfants, International Save the Children Union) and the International Red Cross.

The second Soviet famine happened during the collectivisation in the USSR. In 1932-1933 confiscations of grain and other food by the Soviet authorities[2] caused a famine which affected more than 40 million people, especially in the south on the Don and Kuban areas and in Ukraine, where by various estimates from 5 to 10 million may have starved to death (the event known as Holodomor).[4] Estimates of deaths due to the 1932-1933 famine vary wildly, but are typically given in the range of millions. About 200,000 Kazakh nomads fled to China, Iran, Mongolia and Afghanistan during the famine.

Although famines were taking place in various parts of the USSR in 1932-33, for example in Kazakhstan,[5] parts of Russia and the Volga German Republic,[6] the name Holodomor is specifically applied to the events that took place in territories populated by ethnic Ukrainians.

The last major famine in the USSR happened mainly in 1947 as a cumulative effect of consequences of collectivization, war damage, the severe drought in 1946 in over 50% of the grain-productive zone of the country and government social policy and mismanagement of grain reserves.[7]

The drought of 1963 caused panic slaughtering of livestock, but there was no risk of famine. Since that year the Soviet Union started importing feed grains for its livestock in increasing amounts.

Russia has been gripped in a severe drought from July 2010, which may see grain production fall by 20-25%.