M-13 (Michigan highway)
This article is about the state highway in Michigan; for other uses, see M13 (disambiguation)

M-13 is a 73.339-mile (118.028 km) north–south state trunkline highway that runs through the Saginaw Bay region of the US state of Michigan. It runs from Interstate 69 (I-69) south of Lennon to US Highway 23 (US 23) near Standish. The southern section of the trunkline runs long a pair of county lines in a rural area dominated by farm fields. The highway directly connects the downtown areas of both Saginaw and Bay City. North of the latter city, the Lake Huron Circle Tour follows M-13 along the Saginaw Bay.

The original 1919 version of M-13 ran along the west side of the state, roughly replaced by what is now US 131 in 1926. The current highway was first designated by 1932 with the M-13 moniker. After a series of extensions in the 1930s, the highway ran from Lennon to Saginaw. Another set of expansions in the 1960s added roadways that previously carried US 23 all the way north to the Standish area. A related section of highway is numbered Connector M-13, a connector route that was once part of US 23 in the Kawkawlin area.

M-13 starts at its junction with I-69 near the village of Lennon along the Genesee–Shiawassee county line. The highway follows County Line Road north into the village where it follows Sheridan Avenue through town,[3][4] including a crossing of the of the Huron and Eastern Railway[5] North of Lennon, the trunkline intersects M-21 and continues along the county line through fields. Northeast of New Lothrop, M-13 moves from the Genesee–Shiawassee county line to the Genesee–Saginaw county line. Near Montrose, the highway intersects M-57 before passing into woodlands while crossing fully into Saginaw County.[3][4]

M-13 angles to the northwest briefly before returning to a due north course along E Road. The highway crosses the Flint River in another area of farm fields. As the road approaches Saginaw, it crosses the Cass River and runs to the east of it as it merges with the Shiawassee River and the Tittabawassee River to form the Saginaw River. M-13 follows Washington Avenue in the city of Saginaw inland from, but parallel to, the Saginaw River through downtown. The trunkline intersects M-46, which follows Rust Avenue, and passes Hoyt Park. Washington Avenue runs by the campus of St. Mary's of Michigan Medical Center. As the highway passes out of downtown,[3][4] it crosses or runs along side lines of the Saginaw Bay Southern and Lake State railways.[5] 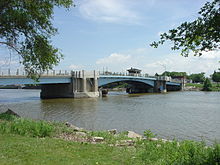 Running immediately next to the river, M-13 meets I-75/US 23 at that freeway's exit 153 just southeast of the Zilwaukee Bridge. The highway runs along Bay City Road as it continues to follow the Saginaw River through the Crow Island State Game Area. On the south side of Bay City, the name changes to River Road. M-13 passes the James Clements Municipal Airport and transitions to follow Broadway Street into downtown. At Lafayette Street, M-13 turns west and merges with M-84. The two highways run concurrently across the Saginaw River on the Lafayette Avenue Bridge. The structure's two spans connect the riverbanks with the Middle Ground Island in the center. West of the bridge, M-13/M-84 follows Salzburg Avenue to the intersection with Euclid Avenue. At that location, M-13 turns north along Euclid Avenue, which runs along the western city line. M-13 meets the 2 one-way streets that carry M-25 and the I-75 business spur at the intersections with Thomas and Jenny streets. From this intersection on, M-13 forms a part of the Lake Huron Circle Tour. Farther north, the highway turns northwesterly on Huron Road; Euclid Avenue continues north as M-247.[3][4]

As the trunkline heads away from Bay City, it runs parallel to the Lake State Railway again. M-13 intersects the northern end of its connector route before Huron Road crosses the Kawkawlin River. The highway runs through the community of the same name on the north side of the river. M-13 and Huron Road continue north across mixed agricultural and forest land as they pass through the communities of Linwood and Pinconning. South of Standish in Arenac County, M-13 meets the northern end of the US 23 freeway and terminates.[3][4]

M-13 is maintained by the Michigan Department of Transportation (MDOT) like other state highways in Michigan. As a part of these maintenance responsibilities, the department tracks the volume of traffic that uses the roadways under its jurisdiction. These volumes are expressed using a metric called annual average daily traffic, which is a statistical calculation of the average daily number of vehicles on a segment of roadway. MDOT's surveys in 2009 showed that the highest traffic levels along M-13 were the 28,242 vehicles daily north of the M-25 junction in Bay City; the lowest counts were the 3381 vehicles per day south of the I-75/US 23 interchange near Saginaw.[6] The only sections of M-13 that have been listed on the National Highway System (NHS) are along the M-84 concurrency and Euclid Avenue south of Wilder Road in the Bay City area.[7] The NHS is a network of roads important to the country's economy, defense, and mobility.[8]