U.S. Route 12 in Michigan
This article is about the section of highway in Michigan. For the entire length of highway, see US Highway 12.

US Highway 12 (US 12) is a US Highway that runs from Aberdeen, Washington to Detroit, Michigan. In the US state of Michigan it runs for 208.90 miles (336.19 km). Previous to the creation of Interstate Highways in Michigan, US 12 ran along Michigan Avenue between Kalamazoo and Detroit, a highway corridor now served by I-94. The US 12 designation was moved at that time to replace US 112 between New Buffalo and Ann Arbor.

US 12 enters the state of Michigan west of New Buffalo near the town of Michiana. The Lake Michigan Circle Tour is routed along US 12 until the two meet I-94 in New Buffalo. US 12 continues across the southern portion of Berrien County running eastward to Niles. There US 12 meets US 31/St. Joseph Valley Parkway. US 12 runs parallel to the state line intersecting US 131 near White Pigeon and M-66 in Sturgis in St. Joseph County. East of Sturgis, US 12 turns northeasterly to Coldwater and a major intersection with I-69.

East of Coldwater, US 12 runs northeastward to Jonesville northwest of Hillsdale where it meets M-99. In Jackson County it passes near the Michigan International Speedway in Brooklyn. It runs along the Lenawee/Washtenaw county line before turning northeast to Ann Arbor and Ypsilanti. Here it forms Michigan Avenue the rest of the way to Detroit. US 12 and Michigan Avenue part ways briefly in Ypsilanti when US 12 follows I-94 and BUS US 12 follows Michigan Avenue near Willow Run. US 12 runs roughly parallel to I-94 east to Detroit before crossing over to the south side of the freeway and ending downtown Detroit at the corner of Michigan and Cass.

Old US 12 in Michigan runs from downtown Detroit to Chicago. It was replaced by Interstate 94 in 1962, and the state of Michigan re-routed the U.S. 12 designation to the former route of U.S. Highway 112.

What is now US 12 was originally Chicago Road, which ran from Detroit, Michigan, to Chicago, Illinois. It follows the general route of the old Sauk Trail, an important Native American trail. In 1680, the explorer Robert La Salle was probably the first European to travel along it.

The disasters suffered in the War of 1812 taught the Government that it could not defend the western country without roads over which to move its armies and their supplies. In 1824, the United States Congress appropriated money for the survey of roads of national importance in the General Survey Act, and the U.S. President allocated one third of the entire sum to surveying a military highway connecting Detroit with Fort Dearborn at Chicago. From about 1830 on, an ever-increasing flood of settlers poured into the Old Northwest and thousands of them traveled the new highway leading to Chicago, which has ever since been called the Chicago Road. In 1833, the Detroit Arsenal was constructed near the eastern end of the road and its water connection to the East Coast. By 1835, daily stagecoaches ran between Detroit and Chicago.[2]

Construction of the Chicago Road began on the eastern end of the Sauk Trail, and the road did not reach the Michigan-Indiana border until 1835.[3]

It was an old highway that ran through the middle of the major towns and cities of Michigan between Detroit and Chicago. In most cases the road is still there, and is named either Michigan Avenue, Old US 12 or the Red Arrow Highway, named after the 32nd Infantry Division.[4] It is still possible to drive the highway from downtown Detroit all the way to The Magnificent Mile in Chicago, with only a few places in which one is required to navigate around the Interstate Highway. The major break in Old US 12 is in the middle of Michigan in Parma Township 42°15′43″N 84°41′40″W﻿ / ﻿42.262°N 84.69455°W﻿ / 42.262; -84.69455. It is at this point that I-94 cuts south to some degree and bisects the old highway, forcing a motorist to navigate north on smaller roads. Some bypassed portions of the roadway have (although faded) dashed white lines, predating the 1971 Michigan Manual on Uniform Traffic Control Devices.

Prior to 1956, the Detroit-Ann Arbor segment of US 12 was routed directly through Ann Arbor, through Plymouth Township, Livonia, and Redford Township, into Detroit, along the Plymouth-Ann Arbor Road corridor to Plymouth Road's eastern terminus at US 16, Grand River Avenue. US 12 continued on Grand River Avenue, co-signed with US 16, into downtown Detroit. Except for the co-signed Grand River Avenue segment, this route was designated as M-14 when US 12 was rerouted to the Detroit Industrial and Willow Run Expressways, most of which became I-94 in 1962. 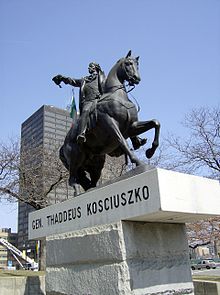 Michigan Avenue is one of the major pre-interstate roads of the state of Michigan. Running through the state east to west, it follows the former course of old US 12 which itself followed the earlier military territorial highway, the Chicago Road. Today the Michigan Avenue name follows a discontinuous route: from downtown Detroit to Hayes State Park in Lenawee County it follows the current route of US 12. West of this on the current US 12, the Michigan Avenue name is dropped and the road is known as simply "US 12" (west of the junction with US 127 the road is also known as "Chicago Road").

From the eastern Jackson County boundary west to Battle Creek, it mostly follows the route of old US 12, although it has been routed over newer roads in places where I-94 was built over the former US 12. The Michigan Avenue designation ends on the west side of Kalamazoo, near US 131, and reappears only within the village of Paw Paw.

In Detroit, Michigan Avenue is one of five major avenues (along with Woodward, Grand River, Gratiot and Jefferson) planned by judge Augustus Woodward in 1805 that extend from downtown Detroit in differing directions. Like the other major avenues, the road extends well beyond the city of Detroit, and historically served as a principal axis of expansion for development beyond Detroit and as the main street of many small towns along its route. The road was a principal settlement and trade route to the west, connecting the water route through the Great Lakes from the east to Chicago and the west without the long passage by water around the unsettled North of Michigan.

Historic Tiger Stadium, the home of the Detroit Tigers from 1895–1999, was colloquially named "The Corner", referring to its location on the corner of Michigan Avenue and Trumbull Avenue in Detroit. It has since been demolished.

In Westland, the historic Eloise complex was on Michigan Avenue.

The US 12 designation was moved to supplant US 112 in Michigan in January 1962. This removed the US 12 designation from the I-94 freeway except for the Ypsilanti bypass, and US 112 was completely removed as a highway designation. BUS US 112 in both Niles and Ypsilanti became BUS US 12. On March 15, 2001, US 12 was shortened in Detroit by four city blocks to end along Michigan Avenue at Griswold Street. This would be shortened again on June 8, 2005 to Michigan Avenue and Cass Avenue.

Pulaski Memorial Highway, after Kazimierz Pułaski, is an honorary name given to the current routing.[5] It has also been designated as the Iron Brigade Memorial Highway;[6] a designation which it also has in Indiana, Illinois and Wisconsin.[7][8][9]