North Mountain is a narrow southwest-northeast trending volcanic mountain range on the mainland portion of southwestern Nova Scotia, stretching from Brier Island to Cape Split. It forms the northern edge of the Annapolis Valley along the shore of the Bay of Fundy.

North Mountain rises dramatically from the valley floor and tapers somewhat more gradually to the north and west where it meets the coast, although many parts of this coast have vertical cliffs rising higher than 30 metres, most notably at Cape Split. A break occurs at Digby Gut where a gap in the mountain ridge is filled by a deep tidal channel separating the eastern end of the mountain from Digby Neck.

The highest point on the ridge is at Mount Rose in Annapolis County, north of Lawrencetown. 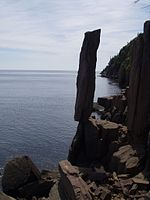 The Balancing Rock, a columnar basalt fragment of the North Mountain near Digby, Nova Scotia.

The ridge traces its history to the Triassic period when this part of Nova Scotia occupied the center of the supercontinent Pangaea. It is a 201 million year old sequence of tholeiitic basalts, which contains columnar jointing. The basalts also extend under the Bay of Fundy and parts of it are exposed on the shore at Five Islands, east of Parrsboro on the north side of the bay.[1] Numerous sediment-filled fissures are present near the upper surface of North Mountain. The hard ridge of basalt resisted the grinding of ice sheets that flowed over the region during past ice ages, and now forms one side of the Annapolis Valley in western part of the Nova Scotia peninsula.

North Mountain is believed to have formed during the opening of the Atlantic Ocean.[2] It is a portion of the Central Atlantic Magmatic Province, which is a gigantic flood basalt and intrusive complex along east coast of the United States, Europe, northwest Africa and South America with a diameter of 4,000 km.

A viscous (<175 m) North Mountain flow at McKay Head shows ~25-cm-thick distinguished layers separated by ~130 centimeter of basalt in its upper 34 meters. Upper layers (5 meters below the lava top) are extremely vesicular while lower ones are pegmatitic and include a narrow (~2 cm) rhyolite band. The layering of the flow closely resemble that of some Hawaiian lava lakes.[3] 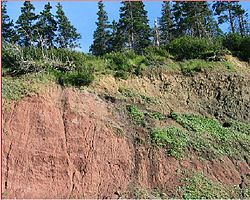 Basal contact of a lava flow section of Fundy basin

Columnar basalt may be seen at Baxters Harbour and at Brier Island.