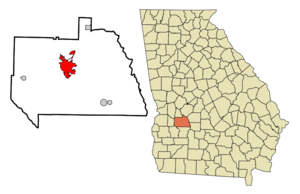 The city is the of Sumter County.GR|6 Americus is the principal city of the Americus Micropolitan Statistical Area, a micropolitan area that covers Schley and Sumter counties [ [http://www.census.gov/population/www/estimates/metro_general/2006/List5.txt MICROPOLITAN STATISTICAL AREAS AND COMPONENTS] , , . Accessed .] and had a combined population of 36,966 at the 2000 census.GR|2

Americus, Georgia was named and chartered by Sen. Lovett B. Smith in 1832.

For its first two decades, Americus was a small courthouse town. The arrival of the railroad in 1854 and, three decades later, local attorney Samuel H. Hawkins' construction of the only privately financed railroad in state history, made Americus the eighth largest city in Georgia into the twentieth century. It was known as the "Metropolis of Southwest Georgia," a reflection of its status as a cotton distribution center. In 1890, Georgia's first chartered system went into operation in Americus. One of its restored cars is on permanent display at the Lake Blackshear Regional Library.

The town was already graced with an abundance of antebellum and when local capitalists opened the Windsor Hotel in 1892. A five-story Queen Anne edifice, it was designed by a Swedish architect, , in Atlanta. Vice-President Thomas R. Marshall gave a speech from the balcony in 1917 and soon to be New York Governor Franklin D. Roosevelt spoke in the dining room in 1928.

On , , the city center was listed on the as the "Americus Historic District." The district boundaries were extended in 1979.

Into the 20th century

For the local black community, Rev. Dr. Major W. Reddick established the Americus Institute for Secondary Education (1897–1932). was a guest speaker there in May 1908. Rev. Alfred S. Staley was responsible for locating the state Masonic Orphanage in Americus, which served its function from 1898 to 1940. Both men engineered the unification of the General Missionary Baptist Convention of Georgia in 1915, the former as president and the latter as recording secretary. The public school named in honor of A.S. Staley was designated a National School of Excellence in 1990.

Two other institutions of higher learning were also established in Americus, the Third District Agricultural and Mechanical School in 1906 (now ), and the South Georgia Trade and Vocational School in 1948 (now ).

In , an Army Air Service training facility, Souther Field, was commissioned northeast of the city limits. , the "Lone Eagle," bought his first airplane and made his first solo flight there during a two-week stay in May 1923. Recommissioned for , Souther Field ended the war as a German camp. The town was incorporated in 1932, and the name Americus was picked out of a hat [cite book|title=Weird, Wacky, and Wild Georgia Trivia|last=Watson|first=Stephanie|coauthors=Lisa Wojna|year=2008|publisher=Blue Bike Books|isbn=978-1-897278-44-4|pages=59] .

, an interracial Christian community, was organized near Americus in 1942. Founder was a mentor to Millard and Linda Fuller, who founded at Koinonia in 1976 before moving into Americus the following year. In 2005, they founded the , also in Americus. is currently located southwest of Americus on Hwy. 49.

The Civil Rights Era in Americus was a time of great turmoil; violent opposition to Koinonia by racist elements led to the bombing of a store uptown in 1957. Dr. spent a weekend in the courthouse jail in 1961, after an arrest in Albany. The "Sumter Movement" to end was organized and led by Rev. Joseph R. Campbell in 1963. As a direct result, two Georgia laws were subsequently declared unconstitutional by a federal tribunal meeting in Americus. Color barriers were first removed in 1965 when J.W. Jones and Henry L. Williams joined the Americus police force. Lewis M. Lowe was elected as the first black city councilman ten years later. With their election in 1995, Eloise R. Paschal and Eddie Rhea Walker broke the gender barrier on the city's governing body.

In 1971, the city was featured in a Marshall Frady article, "Discovering One Another in a Georgia Town," in "Life" magazine. The portrayal of the city's school integration was relatively benign, especially considering the community's checkered past on race relations. Americus' nadir in this respect had occurred in 1913, when Will Redding was lynched by a mob uptown because he had shot Police Chief W.C. Barrow, who later died of his wounds.

There were 6,374 households out of which 32.8% had children under the age of 18 living with them, 34.2% were married couples living together, 27.4% had a female householder with no husband present, and 34.9% were non-families. 29.6% of all households were made up of individuals and 10.5% had someone living alone who was 65 years of age or older. The average household size was 2.52 and the average family size was 3.14.

There is also one private, independent school located in Americus, . This private school was established in 1966 accredited by the Southern Association of Colleges and Schools (SACS). Southland currently has 600 students from 4 year old kindergarten through 12 grade. It is a part of the Georgia Independent Schools Association (GISA).

In 2004, Sumter County High School and Americus High School merged, becoming Americus-Sumter County High School; the South Campus houses grades 10-12 while the North Campus (formerly Sumter High) serves as the 9th Grade Academy, the Performance Learning Center, and the alternative school. At the time of the merger, Juanita Wilson was the principal of the South Campus. She retired in 2005 and was replaced by Tony Overstreet for the 2005–2006 school term. Dr. Larry Moore served as principal from 2006-2008 before being replaced by Ron Gadson for the 2008-2009 school term.

The school competes in the AAAA classification in athletics. Before the merger, Americus High School won state championships in football in 1962, 1965, 1974, 1975, 2000, and 2001. NFL player Leonard Pope was a member of the championship teams in 2000 and 2001. , the starting quarterback for Florida State University in the 2003 Sugar Bowl against the University of Georgia, also graduated from Americus High. Former NFL coaches Chan Gailey and Dan Reeves are graduates and former football players at Americus High.

The first merged football team was led by Coach William Clark. He was succeeded by Coach Mark Wilson in 2006.

and are also located in Americus.

Americus was the target of a around 9:30 P.M. on , . The EF-3 tornado was up to one mile wide, and carved a 38 mile path of destruction through the city. [http://www.srh.noaa.gov/ffc/html/pns3107.txt] It destroyed parts of , forcing the evacuations of all of the patients there. There were two fatalities at a Hudson Street residence near the hospital; all SRH patients were evacuated safely. The hospital, however, faces major reconstruction issues and may not be re-opened until 2010. A makeshift medical facility has opened in a parking lot adjacent to the damaged hospital structure.

Georgia Governor said, "It was worse that I had feared. The hospital was hit, but the devastation within the area of Sumter County and Americus was more than I imagined. The businesses around the hospital are totally destroyed. Power is still not restored in many places. It's just a blessing frankly that we didn't have more fatalities than we did." [ [http://www.walb.com/Global/story.asp?S=6168189 WALB.com News, Weather and Sports for Albany, Valdosta and Thomasville. Leading the way for South Georgia. | Sumter hospital shows tornado's worst punch ] ] Over 500 homes were affected, with around 100 completely destroyed. Several businesses throughout the town were seriously damaged or destroyed as well. Among the businesses suffering major damage were Winn Dixie supermarket, Wendy's, Zaxby's, McDonald's, Dominoes Pizza, and several local businesses. The Winn Dixie was completely destroyed. Dominoes Pizza has since reopened as well as Winn Dixie.