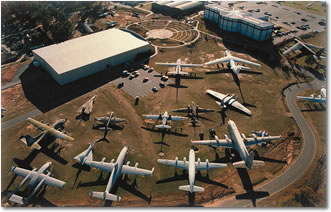 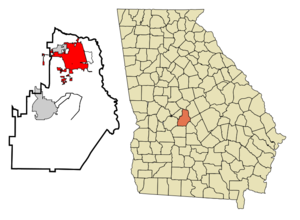 Warner Robins is the 7th largest in the of Georgia, located primarily in Houston County with a small portion in Peach County. The city has its own metropolitian statistical area (Warner Robins metropolitan area. As of the 2000 census, the city had a total of 48,804. It is one of the fastest growing cities in the state and by 2008 has an estimated 65,000 residents. It continues to annex new developments into the city limits at a fast rate.

The city was originally named York and, later, Wellston, which was little more than a stop for local s. During , in order to secure a , it was renamed after Brigadier General . The base was originally an Army Air Corps repair depot named Wellston Army Air Corps Air Depot. When the U.S. Air Force was founded in 1947, the base was named Robins Air Force Base and the logistics headquarters was named the Warner Robins Air Materiel Area (WRAMA). That is today called the Warner Robins Air Logistics Center (WRALC). The base is the state's largest employer in one location with somewhat over 21,000 personnel, mostly civil servants. It was founded in the early 1940s and survived a direct strike from an F4 in April 1953. This was one of the earliest tornadoes to be caught on film. The city is nicknamed the "International City;" this comes from the number of people that live there from all over the world brought together by nearby .

The official motto of Warner Robins is EDIMGIAFAD, which is an acronym for "Every Day In Middle Georgia Is Armed Forces Appreciation Day". The coining of this phrase is attributed Dr. Dan Callahan, a local civic leader. [ [http://www.whitehouse.gov/news/releases/2005/10/20051028-8.html Vice President's Remarks at a Rally for the Troops ] ]

There were 19,550 households out of which 34.3% had children under the age of 18 living with them, 46.3% were married couples living together, 16.6% had a female householder with no husband present, and 33.1% were non-families. 28.1% of all households were made up of individuals and 7.5% had someone living alone who was 65 years of age or older. The average household size was 2.48 and the average family size was 3.03.

Warner Robins is home to the [http://www.museumofaviation.org/ Museum of Aviation] , a four-building complex honoring the history of . The main center is the Eagle Building, which contains military memorabilia since . The Georgia Aviation Hall of Fame and a theater showing various films on the military are also located in the building. Another major building is the Century of Flight Hangar, containing airplanes and ground vehicles. There is also an exhibit and small theater focusing on some famous n politicians and military leaders. Another hangar houses an exhibit on , the , and additional airplanes. The final building showcases artifacts found on . The museum is free but donations are encouraged. A cafe, gift shop, tables, playground, and an outdoor are also on the grounds. Many families and school groups visit the museum, and it is one of Warner Robins' main tourist attractions. It is also the 4th largest aviation museum in the country.

On Oct. 17, 2008, the World War II hangar with interactive exhibits will be formally dedicated. This is an approximatgely $6 million facility and exhibit.

Warner Robins Little League won the 3-2 against . Dalton Carriker hit a walk off home run in the 8th inning to give the team the win. This was the third time Georgia was represented in the and the third championship that the United States has won in a row (and the second consecutive for a Georgia team; the team from won the 2006 title). [http://sportsillustrated.cnn.com/2007/baseball/mlb/wires/08/26/2080.ap.bby.little.league.2nd.ld.writethru.0694/]

In 1958, Claude Lewis, director of the Warner Robins Recreation Department, invented the game of tee-ball. The first game was played in March of that year with 20 children participating. Lewis wrote rules for the new game and sent rule books out to recreation departments all over the country. In 2006, a field was dedicated and named for Lewis, "The Father of Tee-Ball", at the Warner Robins American Little League complex.

As of January 2007, the city of Warner Robins is currently working on redeveloping and renewing areas that have suffered from and/or abandonment through neglect and city growth. The city's plans also include to eventually create a downtown area that will include shopping, entertainment and restaurants and hopefully in the process promote and attract more commercial business to the area. [http://www.macon.com/mld/macon/news/local/states/georgia/counties/houston_peach/16515527.htm]

A recent positive development in the downtown area was the decision of the Warner Robins Area Chamber to purchase and renovate property at 1228 Watson Boulevard for a new chamber headquarters. The organization had looked into various sites throughout Houston County but the final decision was to remain in downtown Warner Robins. In November 2007, the chamber was recently recognized by the organization Keep Warner Robins Beautiful for its efforts at redeveloping and enhancing this property.

The portion of Warner Robins in Houston County is within the . The Houston County school system has 35 schools. Four of them are high schools with another one due to open in September 2009.

The portion in Peach County is within the .Peach County has six schools one being a county-wide high school.