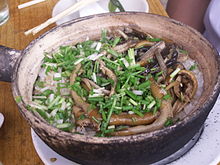 Clay pot cooking is a technique of cooking food in an unglazed clay pot which has been soaked in water so as to release steam during the cooking process. This technique has a long history, stretching back at least to ancient Roman times, and is commonly used in several cuisines in Africa, Europe and Southeast and East Asia.

Typically, an unglazed clay pot is submerged for 15 to 30 minutes to absorb water before cooking, then filled with the food and placed into an oven. The walls of the pot help to diffuse the heat, and as the pot warms it releases the water as steam.

The food inside the clay pot loses little of its moisture because it is surrounded by steam, creating a tender, flavorful dish. The evaporation of the water prevents burning so long as the pot is not allowed to heat until it is completely dry. Because no oil needs to be added with this cooking technique, food cooked in a clay pot may be lower in fat compared with food prepared by other methods such as sautéing or frying. And unlike boiling, nutrients are not leached out into the water.

Because of the heat lost to the evaporation of water, clay pot cooking requires lower oven temperature and longer cooking times than traditional roasting with dry heat. Clay pots may be cleaned by scrubbing them with salt; soaps or detergents should not be used, because the clay may absorb them.

In Chinese, the pot used for such cooking is generally known as 砂鍋 (pinyin: shāguo) or 煲仔 (pinyin: bàozai), a Cantonese word for little pot. Clay pot dishes are sometimes labeled as "hot pot" or "hotpot" dishes on the menus of Chinese restaurants in English-speaking areas of the world.[1], but it should not be confused with hot pot dishes that are served in a large metal bowl and cooked at the table. In Taiwan, the chicken dish sanbeiji is prepared in a clay pot.

In Japan, the clay pot used for cooking is called a donabe, although it is not submerged in water.

In Vietnam, the stew-like dish called kho is cooked in a clay pot. The pot is most often called nồi đất in Vietnamese, although, depending on its size and use, it may also be called nồi kho cá, nồi kho thịt, nồi kho tiêu, or nồi kho tộ.

In the Philippines, the traditional clay pot used for cooking is the palayok.

In the southern states of Tamilnadu and Kerala in India , the traditional clay pot used for cooking is called Chatti. This is usually used in the villages by the working classes especially for cooking heavily spiced ,hot fish curry. Interestingly, this word is also used in Punjab, in Northern India, where traditionally the black lentil (dal makhani) and mustard leaf (saag) is cooked on slow fire for hours.

There is another type of Chatti, called "Kal" Chatti, which means a pot made of stone. In this case it is a kind of chalkstone where the pot is carved out compared to the clay pot where clay is molded and baked. Typically Kal Chatti is used for making South Indian dishes like "Vetta Kozhambhu", "Kirai Masayil" etc.

People in Sri Lanka use clay pot to make a special food called 'Pahi', (Little Jackfruit) fish curry, called ‘abul thiyal’ and some meat and specially rice and some chutney called accharu. Usually clay pots are used for making fresh water fish called’ Lula, Hunga, Magura and Kawaiya’. For more than 2000 years Sri Lankan used clay pots and now both modern and village people use the clay pot because they think the foods are more tasty and healthy.

In Germany, the clay roaster used to cook with is called a Römertopf (literally "Roman pot"). Since its introduction in 1967, it has influenced cooking traditions in Germany and neighbouring European countries. The pot is mainly used to cook meat like pork roast, chicken or stew in an oven.

In Spanish cooking a ceramic roaster known as "olla de barro" is used.