For other uses, see Toast (disambiguation). 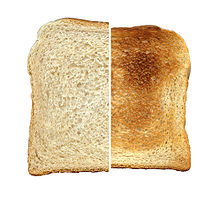 A slice of bread, contrasting untoasted and toasted.

Toast is bread that has been browned by exposure to radiant heat. This browning reaction is known as the Maillard reaction. Toasting warms the bread and makes it firmer, so it holds toppings more securely. Toasting is a common method of making stale bread more palatable. In a modern kitchen, the usual method of toasting bread is by the use of a toaster, an electrical appliance made for that purpose. To use a modern toaster, sliced bread is placed into the narrow slots on the top of the toaster, the toaster is tuned to the correct setting (some may have more elaborate settings than others) and a lever on the front is pushed down. The toast is ready when the lever pops up along with the toast. If the bread is insufficiently toasted, the lever can be pressed down again. One of the first home toasting appliances that was available would only toast one side of the bread at a time, so the bread had to be flipped over half way through.

Bread can also be toasted under a grill (US: broiler), in an open oven, or lying on an oven rack. Toaster ovens are special small appliances made for toasting bread or for heating small amounts of other foods.

Bread can also be toasted by holding it near but not directly over an open flame, such as a campfire or fireplace; special toasting utensils (e.g. toasting forks) are made for this purpose. Before the invention of modern cooking appliances such as toasters and grills, this was the only available method of producing toast.

Toast is made using slices of bread. Many brands of ready sliced bread are available, some specifically marketing their suitability for toasting.[1] A plain dry slice of toast on a plate

Toast is most commonly eaten with butter or margarine spread over it, and may be served with preserves, spreads, or other toppings in addition to or instead of butter. Toast and jam or marmalade is popular. A few other condiments that can be enjoyed with toast are jam, chocolate spread, peanut butter, yeast extract, such as Marmite in the UK, New Zealand and South Africa, and Vegemite in Australia are national traditions. Others toppings include mayonnaise, honey, and cream cheese. Some sandwiches call for toast to be used rather than bread; with the BLT being a prime example of this.

Toast is an important component of many breakfasts, and is also important in some traditional bland specialty diets for people with gastrointestinal problems such as diarrhea.

In the United Kingdom, a dish popular with children is a soft-boiled egg eaten with toast 'soldiers' at breakfast. Strips of toast (the "soldiers") are dipped into the runny yolk of a boiled egg through a hole made in the top of the eggshell, and eaten.[2]

Streetband released the novelty song Toast in the late seventies. It was notable for the band's attempted use of toast as an instrument, with the sound of toast being scraped used later in the track.

Sting's 1988 single Englishman in New York featured the lyric "I don't drink coffee I take tea, my dear / I like my toast done on one side".

Curved Air's 1972 LP Phantasmagoria featured a song "But you keep looking over your shoulder to see if I'm there" with the lyrics:
"Oh when I was a little ghost
a merry time had we.
Each seated on his favourite post,
We chumped and chawed the buttered toast
They gave us for our tea"
Which, per the liner notes on the LP, is processed on a PDP-8 computer. This use of Toast in lyrics is notable as one of the earliest examples of computer music used in a rock music context.

Synonyms:
Scorch (in order to make more palatable, as bread or cheese), Toasted bread / Warm (thoroughly), heat, Health (in drinking), pledge / Pledge, drink a health to, drink the health of, drink in honor of, drink to, Sentiment (uttered at a convivial meeting)