Ophelia is a painting by British artist Sir John Everett Millais, completed between 1851-52. Currently held in the Tate Britain in London, it depicts Ophelia, a character from Shakespeare's play Hamlet, singing before she drowns in a river in Denmark.

The work was not widely regarded when first exhibited at the Royal Academy, but has since come to be admired for its beauty and its accurate depiction of a natural landscape. Ophelia has been estimated to have a market value of around £30 million.

The painting depicts Ophelia, a character from Shakespeare's play Hamlet, singing while floating in a river just before she drowns. The scene is described in Act IV, Scene VII of the play in a speech by Queen Gertrude.[1] 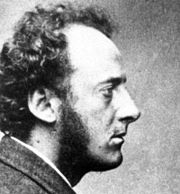 The episode depicted is not seen onstage, but exists only in Gertrude's description. Ophelia has fallen into the river from a tree overhanging it, while gathering flowers. She lies in the water singing songs, as if unaware of her danger ("incapable of her own distress"). Her clothes, trapping air, have allowed her to temporarily stay afloat ("Her clothes spread wide, / And, mermaid-like, awhile they bore her up."). But eventually, "her garments, heavy with their drink, / Pull'd the poor wretch from her melodious lay" down "to muddy death."

Ophelia's death has been praised as one of the most poetically written death scenes in literature.[2]

The painting is known for its depiction of the detailed flora of the river and the riverbank, stressing the patterns of growth and decay in a natural ecosystem. Despite its nominal Danish setting, the landscape has come to be seen as quintessentially English. "Ophelia" was painted along the banks of the Hogsmill River in Surrey, near Tolworth, Greater London. Barbara Webb, a resident of nearby Old Malden, devoted much time to finding the exact placement of the picture, and according to her research, the scene is located at Six Acre Meadow, alongside Church Road, Old Malden.[3] Millais Road is now nearby. Millais' close colleague William Holman Hunt was at the time working on his The Hireling Shepherd nearby.[4] 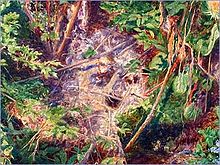 The alleged skull in the foliage

It has often been claimed that a human skull is depicted in the foliage in the riverbank at the right, but there is no extant evidence that this was intended by Millais.[6] However a naturally formed skull shape is indisputably used by Hunt in his companion piece The Hireling Shepherd, which depicts a death's head moth.

At an early stage in the painting's creation, Millais painted a water vole—which an assistant had fished out of the Hogsmill—paddling next to Ophelia. In December 1851, he showed the unfinished painting to Holman Hunt's relatives. He recorded in his diary, "Hunt's uncle and aunt came, both of whom understood most gratifyingly every object except my water rat. The male relation, when invited to guess at it, eagerly pronounced it to be a hare. Perceiving by our smiles that he had made a mistake, a rabbit was then hazarded. After which I have a faint recollection of a dog or a cat being mentioned." Millais painted the water vole out of the final picture, although a rough sketch of it still exists in an upper corner of the canvas hidden by its frame.[4] 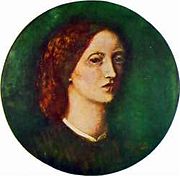 An 1854 self-portrait by Elizabeth Siddal, who acted as Millais' model for Ophelia.[7]

Millais produced Ophelia in two separate stages: he first painted the landscape, and secondly the figure of Ophelia. Having found a suitable setting for the picture, Millais remained on the banks of the Hogsmill River in Ewell—within a literal stone's throw of where fellow Pre-Raphaelite William Holman Hunt painted The Light of the World—for up to 11 hours a day, six days a week, over a five-month period in 1851.

This allowed him to accurately depict the natural scene before him. Millais encountered various difficulties during the painting process. He wrote in a letter to a friend, "The flies of Surrey are more muscular, and have a still greater propensity for probing human flesh. I am threatened with a notice to appear before a magistrate for trespassing in a field and destroying the hay... and am also in danger of being blown by the wind into the water. Certainly the painting of a picture under such circumstances would be greater punishment to a murderer than hanging." By November 1851, the weather had turned windy and snowy. Millais oversaw the building of a hut "made of four hurdles,[8] like a sentry-box, covered outside with straw". According to Millais, sitting inside the hut made him feel like Robinson Crusoe. William Holman Hunt was so impressed by the hut that he had an identical one built for himself.[4]

Ophelia was modelled by artist and muse Elizabeth Siddal, then 19 years old. Millais had Siddal lie fully clothed in a full bathtub in his studio at 7 Gower Street in London.[9] As it was now winter, he placed oil lamps under the tub to warm the water, but was so intent on his work that he allowed them to go out. As a result, Siddal caught a severe cold, and her father later sent Millais a letter demanding £50 for medical expenses.[4] According to Millais' son, he eventually accepted a lower sum.[10]

When Ophelia was first publicly exhibited at the Royal Academy in London in 1852, it was not universally acclaimed. A critic in The Times wrote that "there must be something strangely perverse in an imagination which souses Ophelia in a weedy ditch, and robs the drowning struggle of that lovelorn maiden of all pathos and beauty",[11] while a further review in the same newspaper said that "Mr. Millais's Ophelia in her pool ... makes us think of a dairymaid in a frolic".[4] Even the great art critic John Ruskin, an avid supporter of Millais, while finding the technique of the painting "exquisite", expressed doubts about the decision to set it in a Surrey landscape and asked, "Why the mischief should you not paint pure nature, and not that rascally wirefenced garden-rolled-nursery-maid's paradise?"[12]

In the 20th century, the painting was championed by surrealist painter Salvador Dalí. In an article published in a 1936 journal, he wrote, "How could Salvador Dalí fail to be dazzled by the flagrant surrealism of English Pre-Raphaelitism. The Pre-Raphaelite painters bring us radiant women who are, at the same time, the most desirable and most frightening that exist." In 1906, Japanese novelist Natsume Sōseki called the painting "a thing of considerable beauty" in one of his novels; since then, the painting has been highly popular in Japan. It was exhibited in Tokyo in 1998 and travelled there again in 2008.

The painting has been widely referenced and pastiched in art, film and photography. In The Ring 2, while Rachel Keller browses the pages of the book found in the cellar of Samara Morgan's house, this painting can be seen on the book. Laurence Olivier's film Hamlet (1948) based its portrayal of Ophelia's death on the painting. In Ken Russell's biopic of Rossetti, Dante's Inferno, the composition is used to symbolise Elizabeth Siddal's own death. The video of Nick Cave's song "Where the Wild Roses Grow" depicted Kylie Minogue mimicking the pose of the image. The video was included in the Van Gogh Museum's 2008 exhibition of Millais's work. The museum also created the exhibition and book Ik, Ophelia (I, Ophelia) which included re-creations and explorations of the composition by photographers. It included work by Sam Taylor-Wood, Rineke Dijkstra and Hellen van Meene.[13] The still of Kirsten Dunst floating down a stream in her wedding dress with her bouquet in Lars von Trier's Melancholia is also inspired by Ophelia.

Ophelia was purchased from Millais on 10 December 1851 by the art dealer Henry Farrer for 300 guineas. Farrer sold the painting to B.G. Windus, an avid collector of Pre-Raphaelite art, who sold it on in 1862 for 748 guineas. The painting is presently held at Tate Britain, London, and is valued by experts at least £30 million.[4]