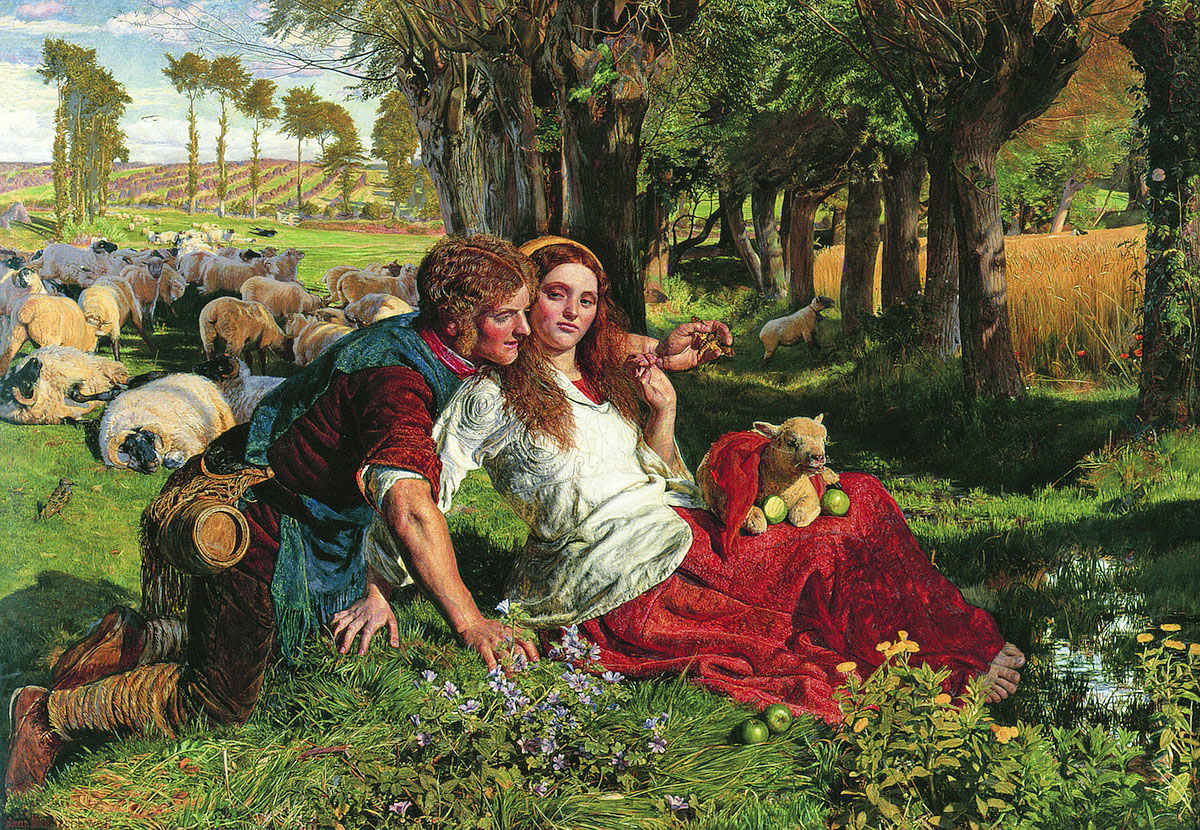 "The Hireling Shepherd" (1851) is a painting by the artist . It represents a shepherd neglecting his flock in favour of an attractive country girl to whom he shows a Death's Head Moth. The meaning of the image has been much-debated. [ [http://www.victorianweb.org/painting/whh/replete/hireling.html The Victorian Web] ]

Hunt painted the picture when he was working in close collaboration with , who was painting "Ophelia" at the same time in the same region of . Both paintings depict English rural scenes, the innocence of which is disturbed by subtle but profoundly threatening violations of natural harmony. In Hunt's painting, the shepherd ignores his flock of sheep, who wander over a ditch into a field of corn. This violation of boundaries is paralleled by the shepherd's physical intrusions into the personal space of the girl, who responds in an ambiguous way that might be interpreted as complicity or as a knowing skepticism. As he shows her the moth, he places his arm round her shoulder.

When it was first displayed in the , it was accompanied by a quotation from "":

:Sleepeth or waketh thou, jolly shepherd?:Thy sheep be in the corn;:And for one blast of thy minikin mouth,:Thy sheep shall take no harm.

After it was exhibited, Hunt's enemies condemned the painting for its vulgarity, objecting to its portrayal of red-faced and sexually uninhibited country people. The objected to the "fiery red skin" and "wiry hair" of Hunt’s peasants (22 May, 1852, p. 407). The Athenaeum was particularly offended by these "rustics of the coarsest breed...flushed and rubicund" from too much cider. It insisted that "romp and rubicundity of this pair contrast with the pallor and pathos of Mr Millais’s picture ["Ophelia"] ." (22 May, 1852, p. 581-3)

His supporters insisted that the painting was an unvarnished image of social fact. Hunt himself, however, hinted that he had a hidden meaning in mind, a claim he elaborated upon in a letter when the painting was acquired by . Hunt asserted that he intended the couple to symbolise the pointless theological debates which occupied Christian churchmen while their "flock" went astray due to a lack of proper moral guidance. This would make the title a Biblical allusion; in the story of the Good Shepherd (in the ), the Good Shepherd is explicitly compared to a "hireling" shepherd, who has no care for the sheep.

The irreconcilability between these interpretations and the complex ambiguities in the poses and expressions led the novelist to discuss the painting in detail in his "anti-novel" "Report on Probability A" (1968) in which characters from parallel universes observe each other in an attempt to comprehend the alien worlds they have been given partial access to. The painting is repeatedly described as an example of an image that may have a clear and legible meaning, if only it can be found, or, alternatively, it may be a fragment of experience forever locked into an unreadable moment with multiple possible narratives leading to it and from it.