On 25 June 1992, the Heads of State and Government of eleven countries signed in Istanbul the Summit Declaration and the Bosporus Statement giving birth to the Black Sea Economic Cooperation (BSEC). It came into existence as a model of multilateral political and economic initiative aimed at fostering interaction and harmony among the Member States, as well as to ensure peace, stability and prosperity encouraging friendly and good-neighbourly relations in the Black Sea region.

The BSEC Headquarters - the Permanent International Secretariat of the Organization of the Black Sea Economic Cooperation (BSEC PERMIS) - was established in March 1994 in Istanbul.

With the entry into force of its Charter on 1 May 1999, BSEC acquired international legal identity and was transformed into a full-fledged regional economic organization: Organization of the Black Sea Economic Cooperation. With the accession of Serbia (then Serbia and Montenegro) in April 2004, the Organization’s Member States increased to twelve[1].

An important aspect of the activities of BSEC is the development of SME and entrepreneurship in the member countries. Concerning these issues, a series of workshops have been organized in cooperation with Konrad-Adenauer-Stiftung and ERENET. 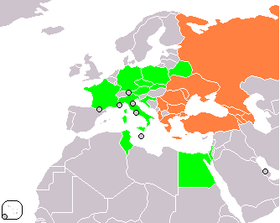 As seen above, membership has not been restricted to countries which have access to the Black Sea: Albania, Armenia, Azerbaijan, Greece, Moldova, and Serbia do not have a coastline on the Black Sea. Montenegro's application was vetoed by Greece after Turkey vetoed the previous application of the Republic of Cyprus, prompting Greece to cease to approve future applications from any country[2].

Observer nations are the following:

Observer organizations are the:

The Black Sea Trade and Development Bank (BSTDB) is an international financial institution that was formed 24 January 1997.[3] supports economic development and regional cooperation by providing trade and project financing, guarantees, and equity for development projects supporting both public and private enterprises in its member countries. Objectives of the bank include promoting regional trade links, cross country projects, foreign direct investment, supporting activities that contribute to sustainable development, with an emphasis on the generation of employment in the member countries, ensuring that each operation is economically and financially sound and contributes to the development of a market orientation.[4] The organization has an authorized capital of $1.325 billion. [5] The bank's headquarters are located in Thessaloniki, Greece

BSTDB is governed by the Agreement Establishing Black Sea Trade and Development Bank, a United Nations registered treaty. The organization was established January 24 1997.[6] Unlike the International Monetary Fund and others, the BSTDB does not attach policy conditions by which debtor states can be controlled.[7] Moody's Investors Service gives the organization a positive 'Baa1' credit rating.[8]

Serbia and Montenegro in April 2004[1]; BSEC membership was inherited by Serbia after the country dissolved in 2006[9].