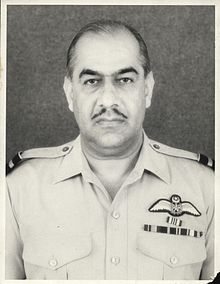 Air Commodore Muhammad Zakaria Butt was a Pakistan Air Force's fighter pilot who had served in Indo-Pak War of 1965 and 1971. He was born to a respected family of Lahore in 1929. He served as the bodyguard of Quaid-e-Azam Muhammad Ali Jinnah and after Jinnah's death, Butt, joined the Pakistan Air Force in 1948.[1]

Muhammad Zakaria Butt was one of the best fighter pilots and administrators in the history of PAF. He had a distinguished career, founded the Squadron 17 in 1957, commanded all major bases in Pakistan, headed the Pakistan Military Mission in Saudi Arabia and served as the Air Defence Commander in 1971 war. He was also the Deputy Chief of Air Staff – Inspection during his final years in the PAF.

Zaki Butt died at his home in 1993 in Islamabad.