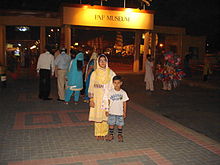 The museum is open throughout the year for seven days a week from 8 am to 10 pm. Adult ticket Rs 30 and Child Rs 20. Only families are allowed on Sunday.

Pakistan Air Force Museum is known for its well organized displays, rides and greenery. The main museum is located inside the park and features all major fighter aircraft that have been used by the Pakistan Air Force are on display. The museum houses the Vickers VC.1 Viking used by Quaid-e-Azam Mohammed Ali Jinnah, founder of Pakistan.

Many aircraft are also on display outside in the park and some in the hangar as well, along with photo and weapon galleries. There is also a souvenir shop where miniature jet models, key chains, shirts and other Air Force related merchandise is available. A mosque and restaurant also cater the park.

Besides those from PAF inventory, visitors can see the captured Folland Gnat of Indian Air force and Afghan Air Force Mig 21 and Iraq Air Force, Antonov An-12. Then there is the unique and most precious Viking of Quaid-e-Azam Muhammad Ali Jinnah.

Some of the aircraft that are preserved in the museum are: