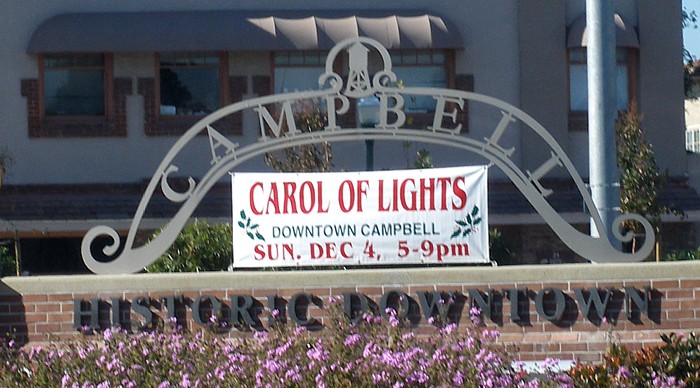 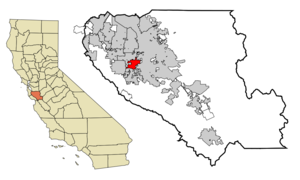 Campbell is home to the , a sprawling open-air retail complex which was involved in a famous case that established the extent of the right to free speech in .The larger of the associated Pruneyard Towers, built in 1970, was for many years the tallest building between
and . Today the is home to Democrat and the south bay offices of the .

Of the total area, 1.75% is water, consisting of s in and in other locations; San Tomas Aquino Creek, which flows north on the west side of the city, is completely enclosed with s and runs through s; and Los Gatos Creek, which flows north-north-east on the east side of the city and has paths along both banks for s and s (locally called the "Par Course").

28.0% of the households had children under the age of 18 living with them, 42.6% were married couples living together, 10.1% had a female householder with no husband present, and 42.7% were non-families. 30.4% of all households were made up of individuals and 7.0% had someone living alone who was 65 years of age or older. The average household size was 2.38 and the average family size was 3.02.

About 48% of the adult population has at least one -level degree. However, this has declined in recent years as a greater number of working-class immigrants move into the city.

At the county level, Campbell is located entirely within the 4th supervisorial district, represented on the Santa Clara County Board of Supervisors by .

Federally, Campbell is located in , which has a Cook PVI of D +14 [cite web | title = Will Gerrymandered Districts Stem the Wave of Voter Unrest? | publisher = Campaign Legal Center Blog | url=http://www.clcblog.org/blog_item-85.html | accessdate = 2008-02-10] and is represented by Democrat .

Campbell was founded by Benjamin Campbell, after whom the city was named. He came to in 1846 with his father, William Campbell. William started a sawmill in Saratoga and surveyed the cities of San Jose and Santa Clara. In 1851, Benjamin bought convert|160|acre|km2 in southern and cultivated and grain on it. This area later became Campbell's historical downtown core.

About a third of Campbell was a part of the 1839 land grant. The Northern extent of the granted land was along present-day Rincon Avenue and across the North end of John D. Morgan Park in central Campbell.

In 1878, Campbell sold his land for $5 an to a railroad company. By 1887, the first subdivision was recorded west of the railroad from Campbell Avenue to the spot where the Water Tower Plaza now stands. The area became the center for shipping fruit grown in the surrounding area, and within a short time, the drying grounds and canneries made Campbell an important rail center. The Campbell Fruit Growers' Union became a well-known cooperative with its 17 acre drying yard. J.C. Ainsley Packing Company, Hyde Cannery, and Payne Cannery were the main fruit packing companies. The Bank of Campbell was founded in 1895.

Campbell was officially incorporated as a city in 1952. The city then grew rapidly as orchard lands disappeared tract by tract. Today, Campbell is a suburban residential neighborhood in the southern part of the .

Campbell is situated in the southern portion of the , with Highway 17 passing through eastern Campbell and Highway 85 to its south. The historic downtown section sits just west of the railroad in the central area. The southwestern area of Campbell is known as the San Tomas neighborhood and varies somewhat from most of Campbell in the size of its lots and styles of housing. Hamilton Avenue is one the northernmost roads in Campbell.

The largest park in Campbell is Los Gatos Creek Park near Highway 17, and the second largest is John D. Morgan Park.

in Campbell is operated by the and includes several local and express bus lines that link the community to nearby towns, including Cupertino, Los Gatos, Palo Alto San Jose, Santa Clara and Saratoga. Additionally, the town is served by three stations on the Mountain View - Winchester line, including Hamilton Station, Downtown Campbell Station, and the line's terminus at Winchester Station. These stations were opened as part of the first phase of the Vasona Light Rail project; the line will be extended past Winchester to in Los Gatos once funding is secured. That line is now served by buses.

The extension was the subject of a minor dispute with the over the sounding of train horns late at night. This dispute delayed the opening of most of the extension for two months before the grand opening on , .

There are few large shopping centers or business complexes in the city, as Campbell is primarily a an residential area. and each have stores within the city limits and are two of the city's largest employers.

Most residences are single-family homes, although there are some areas with condominiums, duplexes, and s. Single-family homes typically have one or two s and three or four s and are between convert|1000|sqft|m2 and convert|1600|sqft|m2 on lots typically measuring about convert|6000|sqft|m2. The vast majority were built in the 1950s through 1970s. There are pockets of older homes, mostly near , often in demand for their architectural styles.fact|date = July 2008 There are also pockets of newer, much larger homes about convert|3500|sqft|m2, mostly built in the 1990s on subdivided lots previously occupied by homes dating from the first half of the 20th century. Most of Campbell's apartments are located in northern Campbell on Hamilton and Campbell Avenues.

Campbell's downtown is located near where Campbell Avenue intersects with the railroad. The downtown has many shops, bars, and restaurants.

The oldest commercial building in the city was erected in 1920, originally for the Grower's Bank. The building was converted to a movie theater in 1938, which closed in 1953. In 1968, The Gaslighter Theater company purchased and refurbished the building with a small stage and bar. [ [http://www.gaslighter.com The Gaslighter home page] . Retrieved on .] The Gaslighter produced s and -style shows there until it closed in 2006. The building was sold and is currently undergoing refurbishment to become a lounge.fact|date = July 2008

Like many other cities in the , Campbell was originally orchard land that was later developed into housing tracts. A few small orchards remain, though their numbers continue to dwindle rapidly as they are converted to housing and shopping.

In the early 1990s, the , a unique English Tudor-style house built in the 1930s, was moved from its original site at the corner of Hamilton and Bascom Avenues (the current site of eBay's headquarters) to the downtown quad and furnished with many of the Ainsley family's original furnishings. It has become the centerpiece for the , which houses additional exhibits in the nearby old firehouse. The Ainsley House was built in the style of English country cottages for , a pioneer in Santa Clara County, which was at the time known for its vast spreads of fruit s.

The Campbell Community Center is located on the northwest corner of Winchester and Campbell Avenues, in the building that used to be , the original school in the . The Redwood Tree, which stands at the corner of Winchester Boulevard and Avenue was originally planted there on May 11, 1903 by then President, . The city acquired the property on August 1, 1985, three years after the school shut down. [ [http://www.ci.campbell.ca.us/heritagetheatre/history.htm History of the Campbell Heritage Theatre] . Retrieved on .] The Heritage Theater, formerly the high school's auditorium, was reopened after renovations in 2004. The Community Center holds classes, and portions are available to be rented for various events.

Campbell was also the site of the 1896 spree-killing by .

The was invented in Campbell.

, singer and guitarist for the punk band Rancid, grew up in Campbell and frequently mentions the town in songs by both Rancid and his side project .

*, editor and owner of the "Wrestling Observer Newsletter"
*Don Hahn, ; played for the , , , , and in the late 1960s to mid-1970s
*, psychic, spiritualist, author
* of Rancid, Lars Frederiksen & The Bastards
*, quarterback for Denver Broncos
*, right tackle for the San Francisco 49ers