The Adventure of the Missing Three-Quarter

The Adventure of the Missing Three-Quarter

"The Adventure of the Missing Three-Quarter", one of the 56 Sherlock Holmes short stories written by British author Sir Arthur Conan Doyle, is one of 13 stories in the cycle collected as The Return of Sherlock Holmes. It was originally published in Strand Magazine in 1904 with illustrations by Sidney Paget. 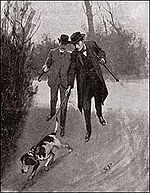 Mr. Cyril Overton of Trinity College, Cambridge comes to Holmes seeking his help in Godfrey Staunton’s disappearance. Staunton is the key man on Overton’s rugby team, and they will never win the important match tomorrow against Oxford if Staunton cannot be found.

Holmes has to admit that sport is a bit outside his ken, but he takes this case as seriously as any other. It proves not at all elementary.

Staunton had seemed a bit pale and bothered earlier in the day, but late in the evening, according to a hotel porter, a rough-looking, bearded man came to the hotel with a note for Staunton which, judging from Staunton’s reaction, contained rather devastating news. He then left the hotel with the bearded stranger, and the two of them were seen running in the direction of the Strand at about half past ten. No-one has seen them since.

Overton has wired to Cambridge to find out if Staunton has been seen there — he has not. He has also wired Lord Mount-James, Staunton’s very wealthy and thoroughly miserly uncle and nearest living kin, but has heard no answer. Staunton is the almost-eighty-year-old Lord Mount-James’s heir, but he must meanwhile live in relative poverty owing to his uncle’s tightfistedness.

At the hotel, Holmes questions the porter. This bearded man who brought the note was neither a gentleman nor a workman, and he seemed to be bothered by something, too, for his hand was trembling as he handed Staunton the note. The only word that the porter overheard of their short conversation was “time”.

At six o’clock, the porter had brought Staunton a telegram, and he saw Staunton write a reply. Staunton told the porter that he would send it himself. Holmes looks at the telegraph forms in Staunton’s room, and then at the blotter, finally finding a clue. The impression on the blotter yields a part of the message that Staunton sent: “Stand by us for God’s sake”. Obviously at least one other person is involved (“us”), and there is some kind of danger. Other papers left in the room yield clues.

Lord Mount-James also briefly visits, and can give Holmes no useful information as to his nephew’s whereabouts. The old miser seems utterly aghast at the possibility that it might be a kidnapping whose object would be to extort his wealth.

Holmes and Dr. Watson then go to the telegraph office where Holmes uses a ruse to get the woman there to show him the counterfoil of the message that Staunton sent. It was addressed to Dr. Leslie Armstrong, an academic at Cambridge. They go to see him.

Dr. Armstrong tells Holmes that Staunton is an intimate friend of his. He does not react when told that Staunton has disappeared, and claims not to know where he is, and not to have seen him recently. He also says that Staunton is very healthy, but Holmes then produces one of Staunton’s papers, a thirteen-guinea bill from Dr. Armstrong. Furious, Armstrong refuses to answer any more questions, and denies that he had the telegram from Staunton. He then has his butler show Holmes and Watson out. They lodge at an inn just across the street from Armstrong’s, where they can watch him.

Holmes conducts some inquiries. A man in the yard before the inn tells Holmes that Armstrong, although not in actual medical practice, regularly rides in his brougham out into the country somewhere. The roundtrip seems to take about three hours. Holmes tries following the brougham on one of its outings, hiring a bicycle for the purpose. He is thwarted by Dr. Armstrong, who makes it quite clear that he is aware that Holmes is following him. He gives Holmes the slip. 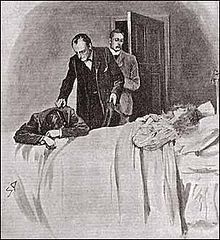 The next day, Holmes’s inquiries in all the local villages come to naught — no-one has seen the doctor’s brougham passing through their village. Where could it be going?

The mystery is at last unlocked by Pompey, a beagle-foxhound cross by appearance, who tracks the doctor’s brougham to a cottage in the countryside after Holmes has squirted aniseed all over its hind wheel. What Holmes finds is not pleasant. Staunton is there, but is grieving over his young wife, who has just died of consumption. Her existence was kept secret, because Lord Mount-James would not have approved of the marriage and would have disowned his nephew. Dr. Armstrong had told the woman’s father about her condition, and he — the bearded stranger — had unwisely told Staunton, who felt compelled to rush off forthwith.

In the opening of this story, Watson claims that for years he "had gradually weaned [Holmes] from that drug mania which had threatened once to check his remarkable career."

This is the second story in which Holmes uses a scenthound to track someone. The other time it happens is in the novel The Sign of Four.