The Adventure of Charles Augustus Milverton

The Adventure of Charles Augustus Milverton

"The Adventure of Charles Augustus Milverton" is one of the 56 Sherlock Holmes short stories written by British author Sir Arthur Conan Doyle. It is one of 13 stories in the cycle collected as The Return of Sherlock Holmes and was published in 1904.

According to William S. Baring-Gould's timeline of the Sherlock Holmes canon, the events of Milverton occurred in 1899.[1] This was nine years after the strange death of Charles Augustus Howell, the real-life inspiration for the character of Milverton (see below). 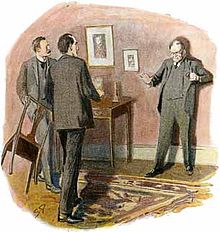 Holmes is hired by the débutante Lady Eva Blackwell to retrieve compromising letters from a blackmailer: Milverton, who causes Holmes more revulsion than any of the 50-odd murderers in his career. Milverton is "the king of blackmailers" and he makes his living out of blackmail. He demands £7,000 (about $700,000 in 2010) for the letters, which would cause a scandal that would break off Lady Eva's engagement. Holmes offers £2,000, all Lady Eva can pay, but Milverton insists on £7,000. It is worth £2,000 to him to make an example of Lady Eva. Holmes resolves to recover the letters by whatever means necessary, as Milverton has placed himself outside the bounds of morality.

Holmes visits Milverton's Hampstead house, disguised as a plumber, in order to learn the plan of the house and Milverton's daily routine. He cultivates the acquaintance of Milverton's housemaid and even becomes engaged to marry her. This rather shocks Watson, but Holmes assures him that he has a hated rival who will step in when the plumber disappears. Holmes has learned where Milverton keeps his blackmail papers (a safe in his study), and plans to burgle Milverton's house that night. Watson comes along.

They break into the study, and Holmes opens the safe. But just then Milverton, who should be in bed asleep, enters the study. Holmes and Watson hide behind a curtain, while Milverton has a midnight meeting with a supposed maidservant offering to sell letters that would compromise her mistress. 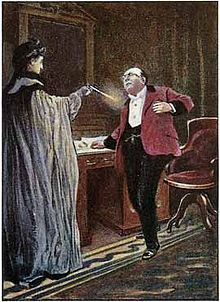 The woman is actually one of Milverton's former victims, whose broken-hearted husband died when she wouldn't pay Milverton and he revealed her secret. Now she avenges her husband by shooting Milverton to death, then stamps on his face.

Watson instinctively begins to rush out and stop the shooting, but Holmes restrains him. Holmes understands, and Watson instantly realizes, "that it was no affair of ours; that justice had overtaken a villain..." The woman runs away, and Milverton's household is roused by the shots. But Holmes takes the time to dump all of Milverton's blackmail papers on the fire in the fireplace, despite the risk of being discovered and caught.

Then Holmes and Watson escape through the garden and over the wall. Watson has to kick himself free from a pursuer who has grabbed his leg.

The next morning, Inspector Lestrade calls at Baker Street to ask for Holmes' help in investigating Milverton's murder, which he ascribes to the two burglars seen escaping over the garden wall. He has a description of one of them: "a middle-aged, strongly built man-square jaw, thick neck, moustache..." Holmes calls that vague. "Why, it might be a description of Watson!" he says, which amuses Lestrade. But Holmes refuses Lestrade's request: "my sympathies are with the criminals, and I will not handle the case."

Later, Holmes recognizes the face of the woman who killed Milverton. He shows Watson her photograph displayed in a shop-window among those of other celebrities. Watson recognizes the name of her famous husband, but Holmes signals silence with a finger to his lips.

The story was faithfully adapted in the 1965 BBC series with Douglas Wilmer as Holmes, and Barry Jones as Milverton. The only difference from the story is the identity of Milverton's killer.

The Soviet TV series featured the case under the name "The King of Blackmail". It was the first of the three episodes concerning Professor Moriarty. Apparently, Milverton was a member of the gang, since certain papers were recovered from his office which helped implicate the Professor. Also, the lady who killed him, as well as her husband, are given names in the series, and Holmes approaches the lady to obtain the papers which she took with her. Otherwise, it is quite faithful to the original.

The story was much extrapolated when adapted by screenwriter Jeremy Paul for the long-running Granada television series starring Jeremy Brett as Holmes. It became the 1992 feature-length episode The Master Blackmailer and featured Robert Hardy as the eponymous reptilian Milverton. Holmes's relationship with the maid is expanded upon, allowing Brett to suggest Holmes' buried tenderness and inability/unwillingness to indulge in matters of the heart. The violence of the villain's end, including the grisly grinding of the avenger's heel into Milverton's bespectacled face, is faithfully adapted, but Holmes and Watson do not at the end gaze upon Milverton's killer's portrait, as the murderess is identified. Deviating from the original story, Holmes holds a very different opinion about the case's end. He requests Watson not to chronicle the case, deeming it to have unpleasant circumstances, whereas in the original story he's slightly more cheerful, as shown by his joking to Lestrade.

The character of Charles Augustus Milverton was based on a real blackmailer, Charles Augustus Howell. He was an art dealer who preyed upon an unknown number of people, including the poet Dante Gabriel Rossetti.[2]

Doyle's literary inspiration often came from his natural interest in crime, and he had no tolerance for predators. Howell died in 1890 under circumstances as strange as any of Doyle's novels: His body was found near a Chelsea public house with his throat posthumously slit, with a ten-shilling coin in his mouth. The presence of the coin was known to be a criticism of those guilty of slander.[2]

The story contains a good example of Doyle's sense of humor. For instance, Holmes baits Lestrade with the seemingly absurd suggestion that his description of one burglar could apply to Watson - when in fact it is a description of Watson.

Another humorous exchange is when Holmes announces his intent to burgle Milverton's house, and Watson insists on accompanying Holmes over his protests. Holmes remarks that they have shared the same room, and could end up sharing a prison cell. He proudly displays his "first-class, up-to-date burgling kit". Watson has rubber-soled tennis shoes, and can make a couple of masks out of black silk. Holmes then observes, "I can see you have a strong natural turn for this sort of thing."

Works related to The Adventure of Charles Augustus Milverton at Wikisource