The Adventure of the Priory School

The Adventure of the Priory School 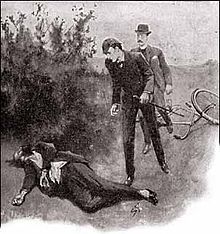 Holmes receives a visit from Thorneycroft Huxtable, the founder and principal of a preparatory school in Northern England. He beseeches Holmes to come back to Mackleton with him to look into the kidnapping of one of his pupils.

James Wilder, the Duke's personal secretary, has also been indiscreet enough to mention something to Huxtable about the young Lord's unhappy home life. His parents no longer live together, his mother having moved to Southern France. Wilder has said that Lord Saltire's sympathies were with his mother in these matters. Upon arrival at the school, though, Lord Saltire seemed to be quite happy, and in his element.

Less than a fortnight later, however, he suddenly disappeared from the school. He could only have left by climbing out of his window at night and down the thick ivy to the ground. Curiously, the German master, Heidegger, is also missing, along with his bicycle. Lord Saltire had received a letter that very day from his father, but Huxtable has no idea of the contents. The boy has taken it with him. He was fully dressed, too. However, Heidegger left his shirt and socks behind.

Holmes decides to accompany Huxtable back to Mackleton, even though he is quite busy with business in London. He tells Huxtable first that if he is going to telegraph home, it would be wise to let the rumour of progress in Liverpool persist.

Once in the North, Holmes asks the Duke a few questions. His Grace does not think that his estranged wife has anything to do with his son's disappearance, nor has there been a ransom demand. He can also think of nothing in the letter that he wrote, posted by James Wilder along with dozens of others that could have upset Lord Saltire.

Holmes establishes that the boy and his kidnappers could not have used the nearby road without being seen, suggesting that they went cross-country. As if to confirm this, the police find the boy's school cap in some gypsies' possession. They swear that they simply found it on the moor, but the police lock them up.

Holmes and Dr. Watson go hunting for clues. They find a bicycle track, but it is not Heidegger's; it does not match his tyres. Holmes observes, however, that one tyre has a patch on it. Most anything observable has been obliterated by cow tracks, making sleuthing rather difficult. Indeed, the only marks on the ground anywhere nearby are cows' hoof prints.

Eventually, Heidegger's bicycle tracks are found, and they end where he apparently had his head smashed in. There he lies, quite dead.

A number of things may already be deduced:

Holmes and Watson find themselves at the Fighting Cock Inn, and meet the innkeeper, Reuben Hayes, who seems startled indeed to hear that Holmes wants to go to Holdernesse Hall, the Duke's nearby house, to tell him news of his son. The two men have lunch there, and Holmes suddenly realises something: He and Watson saw lots of cow tracks out on the moor, all along their line of investigation, but never at any time did they see any cows. Furthermore, the patterns of the hoof prints were quite unusual, suggesting that the cow in question walked, cantered, and galloped – very unusual behaviour for a cow. Holmes and Watson sneak out to Hayes's stable and examine the horse's hooves. As Holmes has expected, there is evidence of recent shoeing, but with old shoes and new nails. Examining the nearby smithy, Holmes and Watson are rather belligerently asked to leave by Mr. Hayes. A short way down the road towards the Duke's house, Watson tells Holmes that he is convinced that Hayes knows all about the sordid business at hand. 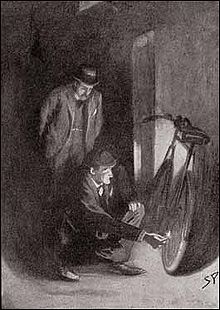 Shortly afterwards, the two men hide as a cyclist comes along the road from the direction of the Duke's. It is James Wilder, and he looks agitated. He arrives at the inn. Soon afterwards, a trap pulls out of the stable yard and goes along the road towards Chesterfield. A while later, someone else – it is getting dark and only a fleeting glimpse of the new visitor is caught – arrives at the inn.

Coming closer, Holmes observes Wilder's bicycle tyres and notes that they are the same make as the first ones encountered on the moor, and as expected, one tyre has a patch. Holmes uses Watson as a stepladder to have a look at the meeting. His look is very brief, and then they leave.

The next morning, they go to Holdernesse Hall, where they find that the Duke is not at all well. Nevertheless, Holmes demands from him a cheque for £6000, saying that he has earned the reward. His son is at the Fighting Cock, and the accused is the Duke himself.

Holmes has not, however, deduced the whole story. He has found Lord Saltire, and seen the Duke with him while standing on Watson's shoulders, but the actual mastermind of this crime is James Wilder. He conceived a plan to kidnap Lord Saltire to force the Duke to change his will. Wilder has always felt cheated, because he is, as it turns out, the Duke's son, born out of wedlock to the Duke's late lover, before he married the Duchess, who bore the Duke a legitimate heir. Wilder knew very well that his father would not call the police on him, as he abhorred the very idea of scandal. The plan began to unravel when Wilder hired Hayes – who has now fled, but been caught on Holmes's information – to do the actual kidnapping. He killed Heidegger, and when Wilder heard the news, he confessed all to his father. So anxious was the Duke to avoid scandal, he agreed to let his younger son stay at the inn for another three days, and to keep quiet, so that Hayes could flee justice.

All ends well, except for Hayes, who faces the gallows. Lord Saltire is brought home from the inn and the Duke writes to his estranged wife asking her to reconcile with him. This he feels she will be willing to do, for the source of the friction between them is going away: James Wilder is being packed off to Australia to seek his fortune there.

As for the cow tracks, they were accomplished by shoeing the horses with special shoes shaped like cow's hooves. This artifice borrows from the story in Greek mythology about Hermes stealing his brother Apollo's cattle in which Hermes shod them with shoes in the design of a horse's hoof so that Apollo would ignore them as irrelevant. These particular shoes are family heirlooms of the ducal house of Holdernesse.

The date can be inferred from the story's mention of May 13 falling on a Monday that year, and the mention that the Duke of Holdernesse has been Lord Lieutenant of Hallamshire "since 1900" (making 1895 rather unlikely). Furthermore, the story mentions that the Duke and Duchess were married in 1888, and that Lord Saltire is ten years old. This would fit in with the 1901 date. Note, however, that in The Adventure of the Blanched Soldier (which takes place in January 1903) Holmes, who is the narrator, says his investigation of the mystery is delayed because that at that moment he was "clearing up the case which my friend Watson has described as that of the Abbey School, in which the Duke of Greyminster was so deeply involved". It could be that Holmes and Watson were both using different names and dates to discreetly obscure the identities of the real participants in this affair.

Holmes shows an uncharacteristically mercenary side in this story, gleefully accepting a cheque for £6000. On the other hand, he does refuse the Duke's offer of £12000, which is intended as a bribe for his silence as to the true nature of the crime.

There was some controversy at the time of publication over Holmes's claim to be able to determine the travel direction of a bicycle from the patterns in the mud on the moor.

Saltire is a term used in heraldry for an X-shaped cross.

The story was dramatised as part of the Holmes series starring Jeremy Brett. However, the ending was changed. In the dramatisation, Wilder takes Lord Saltire as a hostage in a chase led by Holmes, the Duke of Holdernesse, and Watson through an underground cavern beneath the priory cathedral. Having climbed to the top of a cliff-like structure with the boy, Wilder slips and falls to his death, while Lord Saltire is rescued.

Agatha Christie’s short story The Adventure of Johnnie Waverly features a similar plot. It also involves a father of ancient lineage, who seeks Poirot’s help for the forewarned kidnap of his young son. As it turns out, the father knows more than he lets on. In the end, Poirot succeeds in finding the boy and promises the father to hush his involvement up for the sake of his noble lineage.

Works related to The Adventure of the Priory School at Wikisource