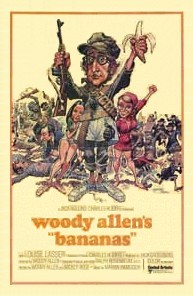 "Bananas" is a 1971 written by Mickey Rose and , ed by Allen, and starring him and . Parts of the plot were based on the book "Don Quixote, U.S.A." by . It was filmed on location in and in various locations in : San Juan, Carolina and Loiza. The MPAA rated the film PG for comic sexual content, including some , some , and crude language.

It is centered on one of Allen's rare character-types. Allen plays a mediocre unintellectual man, Fielding Mellish, who tries to impress Nancy (Lasser), a he loves. Trying to get in touch with the San Marcos revolution, he visits attempting to show his concern for the native people. However, nearly killed by the local , only to be saved by the revolutionaries, he is then indebted to help them. Mellish clumsily learns how to be a revolutionary, and then in an effort to feed the troops goes to a restaurant and in typical New Yorker fashion asks for thousands of deli sandwiches (including one special order), plus wheelbarrows of cole slaw on the side. When the revolution is successful, the Castro-style leader goes mad (declaring at one point that all underwear be worn on the outside), forcing the rebels to place Mellish as their President. When traveling back to the U.S. to obtain financial aid, he reunites with his activist ex-girlfriend and is exposed. In a classic courtroom scene, Mellish tries to defend himself from a series of incriminating witnesses (including disguised as a black woman). He is eventually sentenced to prison, but his sentence is suspended on the condition that he doesn't move into the judge's neighborhood. Nancy then agrees to marry him.

The title is a , "bananas" being for "crazy," as well as being a reference to the phrase "" describing the film's setting. The title also may be a respectful nod to "", the first film by the , by whom Allen was heavily influenced at the time. However, when Allen was asked why the film was called "Bananas", his reply was, "Because there are no bananas in it." In "Don Quixote, U.S.A.", the novel by that served as a source for "Bananas", the protagonist was an agronomist specializing in bananas.

Allen's most famous scenes in this film include his testing a work office (a reference to Chaplin's "Modern Times"), his cowardly attempts to defend an elderly woman from subway thugs (including ), his indiscreetly trying to buy men's magazines in a general magazine store in front of mixed company, carefully helping a driver back up his car until it smashes into another one, the series of mishaps he goes through learning the various techniques of jungle warfare (sucking the poison out of a snakebite wound...), and a totally absurd courtroom trial:cquote|Prosecutor: Tell the court why you think he is a traitor to this country.Miss America: I think Mr. Mellish is a traitor to this country because his views are different from the views of the president and others of his kind. Differences of opinion should be tolerated, but not when they're too different. Then he becomes a subversive mother.

Also noteworthy is Fielding's return to the United States as the President of San Marcos, where he is greeted by a representative from the State Department and Mr. Hernandez, the official interpreter, who speaks broken English. After a few pleasantries are exchanged and it is obvious that Fielding speaks and understands perfect English, Mr. Hernandez continues to try and translate until he is chased away by two men with butterfly nets. And also an interview with his psychiatrist::"I remember when I was a little boy, I once stole a pornographic book that was printed in . I used to rub the dirty parts."

Bookending the movie are two scenes of absolute absurdism, where ABC's "Wide World of Sports" covers a live assassination in San Marcos, complete with shouting "It's all over for El Presidente!" as well as Fielding Mellish's honeymoon with Nancy, which plays out as a boxing match.

One continuity problem in this film occurs during the assassination of the original president of the fictional San Marcos. The assassin draws his and begins to fire. The camera (now on the front of the gun) shows three bullets left. Then the camera switches to the trigger, and, without pause, the assassin fires a further nine bullets from the same gun. However, this can also be interpreted as a joke, since it is likely that Allen was aware of the fact that a six-shooter only shoots six times.

According to an interview in the notes of the film's DVD release, Allen said that there is absolutely no blood in the film (even during executions) because he wanted to keep the light comedic tone of the film intact.