Profanity
For the Wikipedia policy on profanity, see Wikipedia:Profanity. 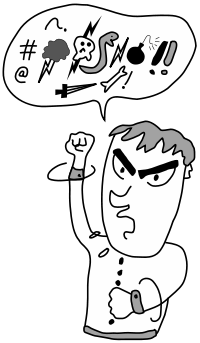 In cartoons, profanity is often depicted by substituting symbols ("grawlixes") for words, as a form of non-specific censorship.

Profanity is a show of disrespect, or a desecration or debasement of someone or something. Profanity can take the form of words, expressions, gestures, or other social behaviors that are socially constructed or interpreted as insulting, rude, vulgar, obscene, desecrating, or other forms.[1]

The original meaning of the adjective profane (Latin: "in front of", "outside the temple") referred to items not belonging to the church, e.g., "The fort is the oldest profane building in the town, but the local monastery is older, and is the oldest building," or "besides designing churches, he also designed many profane buildings". Over time, the meaning has changed.

The original meaning of the term was restricted to blasphemy, sacrilege or saying God's name (or an identifier such as "Lord" or "God") in vain. Profanity represented secular indifference to religion or religious figures, while blasphemy was a more offensive attack on religion and religious figures, considered sinful, and a direct violation of The Ten Commandments.

Profanities in the original meaning of blasphemous profanity are part of the ancient tradition of the comic cults, which laughed and scoffed at the deity or deities.[3][4] An example from Gargantua and Pantagruel is "Christ, look ye, its Mere de ... merde ... shit, Mother of God."[5][not in citation given]

Swearing and cursing are modes of speech existing in all human languages. They perform certain social and psychological functions, and utilize particular linguistic and neurological mechanisms; all these are avenues of research. Functionally similar behavior can be observed in chimpanzees, and may contribute to our understanding, notes New York Time author Natalie Angier.[6]

Angier also notes that swearing is a widespread but perhaps underappreciated anger management technique; that "men generally curse more than women, unless said women are in a sorority, and that university provosts swear more than librarians or the staff members of the university day care center"; and that linguistic research has shown that the physiological reactions of individuals who are proud of their education are similar between exposure to obscene words and exposure to bad grammar.[6]

Profane language is by no means a recent phenomenon. The Bible sometimes uses strong language, such as mention of men who "eat their own dung, and drink their own piss" in the Authorized King James Version of 1611's close translation of Hebrew text of 2 Kings 18:27. Shakespeare is replete with vulgarisms, though many are no longer readily recognized. Even the oldest traces of human writing include swear words.[citation needed]

Keele University researchers Stephens, Atkins, and Kingston found that swearing relieves the effects of physical pain.[7] Stephens said "I would advise people, if they hurt themselves, to swear".[8] However, the overuse of swear words tends to diminish this effect.[8] The team earned themselves the Ig Nobel Peace Prize in 2010 for the research.

Swearing in the workplace (UK)

In the United Kingdom, swearing in the workplace can be an act of gross misconduct under certain circumstances. In particular, this is the case when swearing accompanies insubordination against a superior or humiliation of an inferior employee. However, in other cases it may not be grounds for instant dismissal.[9] According to a UK site on work etiquette, the "fact that swearing is a part of everyday life means that we need to navigate a way through a day in the office without offending anyone, while still appreciating that people do swear. Of course, there are different types of swearing and, without spelling it out, you really ought to avoid the 'worst words' regardless of who you’re talking to".[10] With respect to swearing between colleagues, the site explains that "[a]lthough it may sound strange, the appropriateness [of] swearing [...] is influenced largely by the industry you are in and the individuals you work with". The site continues to explain that, even in a workplace in which swearing is the norm, there is no need to participate in it.[10] The site stresses that swearing is, in generally, more problematic in asymmetric situations, such as in the presence of senior management or clients, but it also mentions that a "holier than thou" attitude towards clients may be problematic.[10]

The Guardian reported that "36% of the 308 UK senior managers and directors having responded to a survey accepted swearing as part of workplace culture", but warned about specific inappropriate uses of swearing such as when it is discriminatory or part of bullying behaviour. The article ends with a quotation from Ben Wilmott (Chartered Institute of Personnel and Development): "Employers can ensure professional language in the workplace by having a well drafted policy on bullying and harassment that emphasises how bad language has potential to amount to harassment or bullying."[11]

The relative severity of various British profanities, as perceived by the public, was studied on behalf of the British Broadcasting Standards Commission, Independent Television Commission, BBC and Advertising Standards Authority; the results of this jointly commissioned research were published in December 2000 in a paper called "Delete expletives?". It listed the profanities in order of decreasing severity.

A similar survey was carried out in 2009 by New Zealand's Broadcasting Standards Authority. The results were published in March 2010, in a report called "What Not to Swear". According to the Authority, the findings "measured how acceptable the public finds the use of swear words, blasphemies, and other expletives in broadcasting".