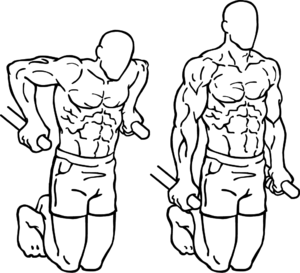 The dip is an exercise used in strength training. Normal, shoulder-width dips primarily train the triceps, with major synergists being the anterior deltoid, the pectoralis muscles (sternal, clavicular, and minor), and the rhomboid muscles of the back (in that order). Wide arm training places additional emphasis on the pectoral muscles, similar in respect to the way a wide grip bench press would focus more on the pectorals and less on the triceps.

To perform a dip, the exerciser hangs from a dip bar or from a set of rings with his arms straight and shoulders over his hands, then lowers his body until his arms are bent to a 90 degree angle, and then lifts his body up, returning to the starting position. Short people are able to cope better with a narrower grip, but not with a wider one. Tall people have greater ease in this exercise overall as their reach to chest size ratio is greater.

Due to natural flexibility in the shoulder joints, it is important to try to "lock" them as much as possible during this exercise. Otherwise, the supporting rotator cuffs may become strained.

Usually dips are done on a dip bar, with the exerciser's hands supporting his entire body weight. For added resistance, weights can be added by use of a dip belt, weighted vest, or by wearing a bookbag with weights in it. A dumbbell may also be held between the knees or ankles. For less resistance, an assisted dip/pull-up machine can be used which reduces the force necessary for the exerciser to elevate his body by use of a counterweight. One may also use resistance bands hooked under his feet to help if he lacks the strength to properly perform a dip. In the absence of this equipment, a lighter variation of the dip can be performed called the "Bench Dip"

The hands are placed on one bench directly underneath the shoulders. The legs are straightened and positioned horizontally; the feet rest on another bench in front of the exerciser. This variation trains the upper body muscles in a similar though not exact manner as the normal dip, whilst reducing the total weight lifted by a significant amount. This exercise can be done also off of the edge of a sofa, a kitchen counter, or any surface that supports the lifter.