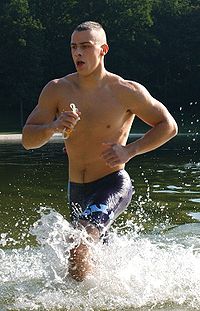 Participant in a triathlon at Catoctin Mountain in 2005

Physical exercise is any bodily activity that enhances or maintains physical fitness and overall health and wellness. It is performed for various reasons including strengthening muscles and the cardiovascular system, honing athletic skills, weight loss or maintenance, as well as for the purpose of enjoyment. Frequent and regular physical exercise boosts the immune system, and helps prevent the "diseases of affluence" such as heart disease, cardiovascular disease, Type 2 diabetes and obesity.[1][2] It also improves mental health, helps prevent depression, helps to promote or maintain positive self esteem, and can even augment an individual's sex appeal or body image, which is also found to be linked with higher levels of self esteem.[3] Childhood obesity is a growing global concern[4] and physical exercise may help decrease the effects of childhood obesity in developed countries. Health care providers often call exercise the "miracle" or "wonder" drug - alluding to the wide variety of proven benefits that it provides.[5][6]

Physical exercises are generally grouped into three types,[7] depending on the overall effect they have on the human body:

Sometimes the terms 'dynamic' and 'static' are used. 'Dynamic' exercises such as steady running, tend to produce a lowering of the diastolic blood pressure during exercise, due to the improved blood flow. Conversely, static exercise (such as weight-lifting) can cause the systolic pressure to rise significantly (during the exercise). 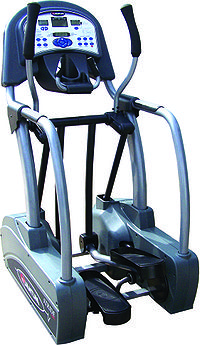 US Marines exercising on the USS Bataan

Exercise reduces levels of cortisol,[citation needed] which causes many health problems, both physical and mental.[13]

Frequent and regular aerobic exercise has been shown to help prevent or treat serious and life-threatening chronic conditions such as high blood pressure, obesity, heart disease, Type 2 diabetes, insomnia, and depression.[14] Endurance exercise before meals lowers blood glucose more than the same exercise after meals.[15] According to the World Health Organization, lack of physical activity contributes to approximately 17% of heart disease and diabetes, 12% of falls in the elderly, and 10% of breast cancer and colon cancer.[16]

There is some evidence that vigorous exercise (90–95% of VO2 Max) is more beneficial than moderate exercise (40 to 70% of VO2 Max).[17] Some studies have shown that vigorous exercise executed by healthy individuals can increase opioid peptides (a.k.a. endorphins, naturally occurring opioids that in conjunction with other neurotransmitters are responsible for exercise-induced euphoria and have been shown to be addictive), increase testosterone and growth hormone,[18] effects that are not as fully realized with moderate exercise. More recent research[19][20] indicates that anandamide may play a greater role than endorphins in "runner's high". However, training at this[which?] intensity for long periods of time, or without proper warmup beforehand and cooldown afterwards, can lead to an increased risk of injury and overtraining.[citation needed]

Both aerobic and anaerobic exercise work to increase the mechanical efficiency of the heart by increasing cardiac volume (aerobic exercise), or myocardial thickness (strength training). Such changes are generally beneficial and healthy if they occur in response to exercise.

Not everyone benefits equally from exercise. There is tremendous variation in individual response to training; where most people will see a moderate increase in endurance from aerobic exercise, some individuals will as much as double their oxygen uptake, while others can never augment endurance.[21][22] However, muscle hypertrophy from resistance training is primarily determined by diet and testosterone.[23] This genetic variation in improvement from training is one of the key physiological differences between elite athletes and the larger population.[24][25] Studies have shown that exercising in middle age leads to better physical ability later in life.[26]

Although there have been hundreds of studies on exercise and the immune system, there is little direct evidence on its connection to illness. Epidemiological evidence suggests that moderate exercise has a beneficial effect on the human immune system; an effect which is modeled in a J curve. Moderate exercise has been associated with a 29% decreased incidence of upper respiratory tract infections (URTI), but studies of marathon runners found that their prolonged high-intensity exercise was associated with an increased risk of infection occurrence. However, another study did not find the effect. Immune cell functions are impaired following acute sessions of prolonged, high-intensity exercise, and some studies have found that athletes are at a higher risk for infections. The immune systems of athletes and nonathletes are generally similar. Athletes may have slightly elevated natural killer cell count and cytolytic action, but these are unlikely to be clinically significant.[28]

Vitamin C supplementation has been associated with lower URTIs in marathon runners.[28]

Biomarkers of inflammation such as C-reactive protein, which are associated with chronic diseases, are reduced in active individuals relative to sedentary individuals, and the positive effects of exercise may be due to its anti-inflammatory effects. The depression in the immune system following acute bouts of exercise may be one of the mechanisms for this anti-inflammatory effect.[28]

In mice, exercise improves cognitive functioning via improvement of hippocampus-dependent spatial learning, and enhancement of synaptic plasticity and neurogenesis.[30] In addition, physical activity has been shown to be neuroprotective in many neurodegenerative and neuromuscular diseases.[31] For instance, it reduces the risk of developing dementia.[32] Furthermore, anecdotal evidence suggests that frequent exercise may reverse alcohol-induced brain damage.[33]

There are several possibilities for why exercise is beneficial for the brain. Examples are as follows:

Physical activity is thought to have other beneficial effects related to cognition as it increases levels of nerve growth factors, which support the survival and growth of a number of neuronal cells.[37]

A number of factors may contribute to depression including being overweight, low self esteem, stress, and anxiety.[38] Endorphins act as a natural pain reliever and antidepressant in the body.[39] Endorphins have long been regarded as responsible for what is known as "runner's high", a euphoric feeling a person receives from intense physical exertion.[40] However, recent research[19][20] indicates that anandamide may possibly play a greater role than endorphins in "runner's high". When a person exercises, levels of both circulating serotonin and endorphins are increased.[41] These levels are known to stay elevated even several days after exercise is discontinued, possibly contributing to improvement in mood, increased self-esteem, and weight management.[40] Exercise alone is a potential prevention method and/or treatment for mild forms of depression.[42] Research has also shown that when exercise is done in the presence of other people (familiar or not), it can be more effective in reducing stress than simply exercising alone.[43]

A 2010 review of published scientific research suggested that exercise generally improves sleep for most people, and helps sleep disorders such as insomnia. The optimum time to exercise may be 4 to 8 hours before bedtime, though exercise at any time of day is beneficial, with the possible exception of heavy exercise taken shortly before bedtime, which may disturb sleep. There is, in any case, insufficient evidence to draw detailed conclusions about the relationship between exercise and sleep.[44]

Exercise is a stressor and the stresses of exercise have a catabolic effect on the body—contractile proteins within muscles are consumed for energy, carbohydrates and fats are similarly consumed and connective tissues are stressed and can form micro-tears.[citation needed] However, given adequate nutrition and sufficient rest to avoid overtraining, the body's reaction to this stimulus is to adapt and replete tissues at a higher level than that existing before exercising.[citation needed] The results are all the training effects of regular exercise: increased muscular strength, endurance, bone density, and connective tissue toughness.[citation needed]

Too much exercise can be harmful. Without proper rest, the chance of stroke or other circulation problems increases,[45] and muscle tissue may develop slowly. Extremely intense, long-term cardiovascular exercise, as can be seen in athletes who train for multiple marathons, has been associated with scarring of the heart and heart rhythm abnormalities.[46][47][48]

Inappropriate exercise can do more harm than good, with the definition of "inappropriate" varying according to the individual. For many activities, especially running and cycling, there are significant injuries that occur with poorly regimented exercise schedules. Injuries from accidents also remain a major concern,[49] whereas the effects of increased exposure to air pollution seem only a minor concern.[50][51]

In extreme instances, over-exercising induces serious performance loss. Unaccustomed overexertion of muscles leads to rhabdomyolysis (damage to muscle) most often seen in new army recruits.[52] Another danger is overtraining, in which the intensity or volume of training exceeds the body's capacity to recover between bouts.[53]

Stopping excessive exercise suddenly can also create a change in mood. Feelings of depression and agitation can occur when withdrawal from the natural endorphins produced by exercise occurs.[citation needed] Exercise should be controlled by each body's inherent limitations. While one set of joints and muscles may have the tolerance to withstand multiple marathons, another body may be damaged by 20 minutes of light jogging. This must be determined for each individual.

Too much exercise can also cause a female to miss her period, a symptom known as amenorrhea.[54]

As of 2011 the effects of community wide interventions to increase exercise levels at the population level is unknown.[55] Signs that encourage the use of stairs, as well as community campaigns, may increase exercise levels.[56] The city of Bogotá, Colombia, for example, blocks off 113 kilometers (70 mi) of roads on Sundays and holidays to make it easier for its citizens to get exercise. These pedestrian zones are part of an effort to combat chronic diseases, including obesity.[57]

Worldwide there has been a large shift towards less physically demanding work.[58] This has been accompanied by increasing use of mechanized transportation, a greater prevalence of labor saving technology in the home, and less active recreational pursuits.[58]

Proper nutrition is as important to health as exercise. When exercising, it becomes even more important to have a good diet to ensure that the body has the correct ratio of macronutrients whilst providing ample micronutrients, in order to aid the body with the recovery process following strenuous exercise.[59]

The benefits of exercise have been known since antiquity. Marcus Cicero, around 65 BC, stated: "It is exercise alone that supports the spirits, and keeps the mind in vigor."[60] However, the link between physical health and exercise (or lack of it) was only discovered in 1949 and reported in 1953 by a team led by Jerry Morris.[61][62] Dr. Morris noted that men of similar social class and occupation (bus conductors versus bus drivers) had markedly different rates of heart attacks, depending on the level of exercise they got: bus drivers had a sedentary occupation and a higher incidence of heart disease, while bus conductors were forced to move continually and had a lower incidence of heart disease.[62] This link had not previously been noted and was later confirmed by other researchers.

Physical exercise has been shown to benefit a wide range of other mammals, as well as salmon, crocodiles and one species of bird.[63] However, several studies have shown that lizards display no benefit from exercise, leading them to be termed "metabolically inflexible".[63]