The city of San Antonio, Texas is composed of a number of neighborhoods, spreading out surrounding the central downtown area.

San Antonio's downtown district, the center point of the city, is a popular destination for tourists, due to attractions such as the Alamo, Riverwalk, Tower of the Americas, and the Rivercenter Mall, which consists of over 100 stores, 21 restaurants, three movie theatres, and the Rivercenter comedy club.

Located in the north-central corridor about two miles (3 km) north of downtown and laid out roughly down the north-south axis of Broadway, this area (ZIP Code 78209) is bordered to the south by Mulberry Avenue, to the north by Interstate 410, to the east by Fort Sam Houston, and to the west by US 281. The enclave cities of Alamo Heights and Terrell Hills are included in this area. This area also includes a large swath of Broadway from Mulberry to Loop 410. Inside this area is also Mahncke Park (the neighborhood and the park), the Witte Museum, Brackenridge Park, Botanical Gardens, San Antonio Zoo, San Antonio Country Club and Japanese Tea Gardens. The whole of 78209 zipcode is sometimes referred to as "Alamo Heights" even though the precise boundaries of the Alamo Heights city and school district are much smaller than the boundaries of the zip code. 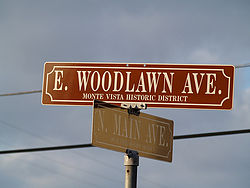 Bounded by Hildebrand Avenue to the north, Highway 281 to the east, I-10 to the west and I-35 to the south, Midtown features an assortment of neighborhoods ranging from the working class Beacon Hill to the up-and-coming Five Points to the established upper middle class Monte Vista. Each neighborhood has distinctive housing characteristics, from Victorian in Beacon Hill to French Eclectic, Neoclassical and Italian Renaissance in Monte Vista.

Olmos Park Terrace, a neighborhood that was granted historic district status by the City of San Antonio in 2007 [1][2], lies just north of Hildebrand next to the City of Olmos Park. It borders the neighborhoods of Midtown, Uptown Broadway, and Downtown.

Uptown Broadway is home to a concentrated area of "old money" bedroom communities. These communities are Alamo Heights, Olmos Park, Lincoln Heights, and Terrell Hills. Combined the total population of these three communities is almost 16,000 people on 4.2 square miles (11 km2). That is a density of nearly 4,000 people per square mile (1,500 km²).

Famous people that reside in Uptown Broadway include Thomas Gibson (Terrell Hills), Tommy Lee Jones (Terrell Hills), and many others. This area is home to quite a few high-rise residential buildings, with more planned. Uptown Broadway is also home to many trendy boutiques as well as the University of the Incarnate Word and two very prominent museums, the McNay Art Museum and the Witte Museum.

North Central is home to many small cities landlocked within the city of San Antonio. Some of these cities are the San Antonio CO-OP district, Castle Hills, Dellview, Hill Country Village, and Hollywood Park. The area also includes the upscale neighborhoods of Elm Creek, Inwood, Rogers Ranch, and Bentley Manor as well as the upper-middle class neighborhoods of Deerfield, Churchill Estates, Hunter's Creek, Oak Meadow, and Summerfield.

Far North Central is home to many of San Antonio's most luxurious homes. Such upscale master-planned communities in this area include Scenic Oaks, Sonterra, Canyon Springs and Stone Oak.

The northeast side is home to Randolph Air Force Base, Schertz, Converse, Universal City, Selma, Kirby, Windcrest, and Live Oak. Four school districts educate this side of town, including Judson ISD, Schertz-Cibolo-Universal City ISD and North East ISD. The northeast side also houses The Forum, which is one of San Antonio's largest shopping centers consisting of a variety of shops and restaurants (located on the corner of Loop 1604 and I-35). Rolling Oaks Mall also serves this area (located on the north side of I-35 at Loop 1604 and Nacogdoches Road).

The northwest side of San Antonio is home to a wide range of neighborhoods, suburbs, and businesses unique to the Alamo City.

Also located in northwest San Antonio is the Medical Center district, which is home to the South Texas Medical Center hospital and research district. The Medical Center is surrounded by neighorhoods including Bluemel, Oak Hills, Mockingbird Hill and Cinnamon Creek. Insurance and banking giant USAA is also headquartered in the area.

The corporate headquarters of Valero; Security Service Federal Credit Union; NuStar Energy; and Kinetic Concepts are all located in the area, mainly along the I-10 corridor. The area is also home to Six Flags Fiesta Texas; the upscale open air shopping center The Shops at La Cantera, anchored by Dillard's, Macy's, Neiman Marcus and Nordstrom; and the 2,000,000-square-foot (190,000 m2) suburban retail center The Rim, anchored by Bass Pro Shops' Outdoor World, and The Palladium, a 19-screen movie theater featuring IMAX screens. This area also includes prestigious neighborhood The Dominion, which is home to David Robinson, many current San Antonio Spurs players and coaches, and George Strait. The wealthy city of Shavano Park is also on the Northwest Side, as is Camp Bullis.

This is one of the fastest growing areas in Metropolitan San Antonio. A large part of this area is outside of the San Antonio city limits, but is served by Bexar County Government. Here you will find Sea World Texas, Northwest Vista College, QVC, Wachovia, CitiCorp and several other large employers. The Far West subdivisions attract many military families who relocate from all over the US due to its close proximity to Lackland AFB. With new homes starting in the low to mid 100's, the area attracts many middle-class families and first time home buyers. Major roads include Loop 1604, State Highway 151, U.S. Highway 90, and Loop 410. Due to the recent real estate boom in the area, Christus Santa Rosa Westover Hills Hospital, numerous businesses including Kohl's, HEB Plus, and Super Wal-mart have moved in as well as many restaurant chains and other specialty stores to the new master planned community of Alamo Ranch.

Known for its Mexican and Tejano culture, which is showcased in places like the Guadalupe Street commercial and entertainment district and the Basilica of the National Shrine of the Little Flower, the West side is also home to the historic Our Lady of the Lake University, and St. Mary's University. The west side is a predominantly Hispanic neighborhood.

The West side's historic Prospect Hill neighborhood, one of the first communities to be built in this area, is rich in history and is within the original 36 miles of downtown San Antonio. Notable Prospect Hill residents (past and present) include former San Antonio Mayor / 10th US HUD Secretary Henry Cisneros, actress Carol Burnett, and Congressman Henry B. Gonzalez. The housing is primarily modest 2- and 3-bedroom homes with a mix of early 1900s and post-WWII houses.

Home to Saint Paul Square, the Alamodome, San Antonio Stock Show & Rodeo, the AT&T Center and its older neighbor, the Freeman Coliseum. Other northern cities include Windcrest, a northeastern suburb known for its extravagant Christmas light displays. The southeastern suburb of China Grove is located along US 87 and was the subject of a Doobie Brothers song entitled China Grove. The East Side is predominantly[citation needed] an African-American neighborhood. The East Side most notable residents were actress Joan Crawford and congressman Percy Sutton of New York. Joan Crawford was born and raised on the infamous Cherry Street area. Soap star Al Freeman was also born and raised in San Antonio along with actress Paula Pentriss.