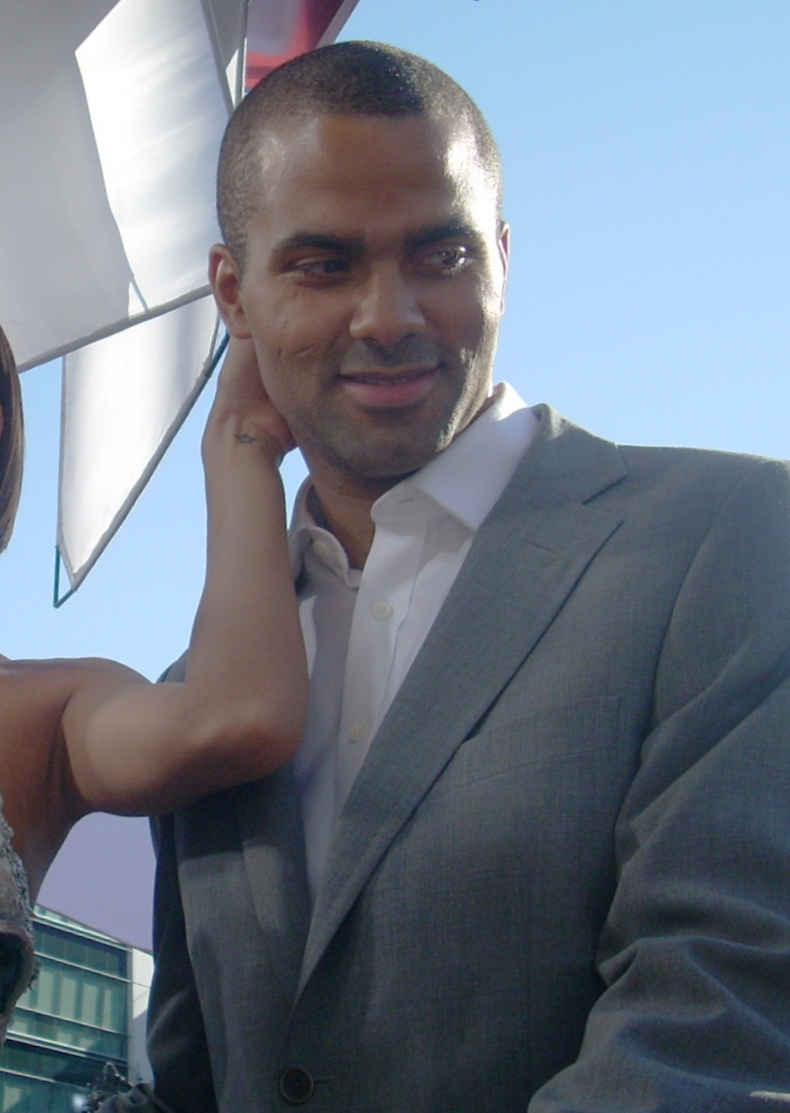 In the summer of 2000, Parker was invited to the in . There, in front of professional scouts and college coaches, he competed against the likes of future NBA players , and . In a contest between the American and European s, Parker recorded 20 points, seven assists, four rebounds and two steals.

Quote_box
width=40%
align=right
quote="...when we gave him his first workout, we didn't think he was tough enough – and we sent him home. And then we set up another interview, another workout... and he was fantastic in that one."
source=-, after the 2007 championship ["Wire Services". "Spurs Coach: I didn't like him", The New Paper, .] |

Prior to the , Parker was invited to the summer camp. Parker's first experiences were daunting as coach had him play against Spurs scout and ex-NBA player . Parker was so overwhelmed by Blank's tough and physical defense that Popovich was ready to send him away after just 10 minutes.

By his sophomore season, Parker had won his first championship ring. He played in all 82 regular season games as San Antonio's starting

Despite winning a championship with the Spurs, doubts lingered over Parker's future. The Spurs had attempted and failed to acquire ' , but Parker told coach Popovich that he wanted to be San Antonio's starting point guard and he was ready to work hard to become a great player. [Wetzel, Dan, [http://sports.yahoo.com/nba/news?slug=dw-parker061507&prov=yhoo&type=lgns "French connection"] , sports.yahoo.com, , accessed .] Parker played well during the regular season, recording 14.7 ppg, 5.5 apg and 3.2 rpg.

Quote_box
width=30%
align=left
quote="He told me, ‘Coach, I’ll play in the NBA and, one day, France will recognize me as a great player’. It’s incredible how, at 18 years old, he could have such confidence. I thought he could play in the NBA, but not that he would become a player of the importance he is today."
source=-Claude Bergeaud, (coached Parker on the French junior team)

On , after delivering consistent numbers in the first half of the 2006–07 season, Parker was selected to play in the as a reserve guard. [ [http://www.nba.com/allstar2007/players/ "2007 NBA All-Star Rosters"] , nba.com/allstar2007, , accessed .] With Parker operating as the starting point guard in the 2006–07 season, the Spurs qualified for the and finished second in the Southwest Division. [ [http://www.nba.com/standings/team_record_comparison/conferenceNew_Std_Div.html 2006-07 DIVISION STANDINGS] , nba.com, accessed .] In the Western Conference Semifinals, the Spurs met the led by two-time and reigning . In the match-up versus the best point guard of his generation, Parker used his speed to score an easy , or hit with his improved mid-range jump shot.

Quote_box
width=40%
align=right
quote="When there is talk about the best point guards, sometimes they don't talk about me. But that's not my main motivation, They can talk about Jason Kidd, Steve Nash, Deron Williams and Chris Paul. I still have the most rings."
source=-Tony Parker [Greg Boeck. [http://www.usatoday.com/sports/basketball/nba/spurs/2007-06-11-Spurs-Parker_N.htm San Antonio's Parker ringing in a big summer] "usatoday.com", 6/12/2007. Accessed , .] In the 2007–08 regular season, Parker recorded similar averages as the previous two seasons for points and rebounds, and set a career-high for assists per game.

Parker played for France's Junior National Team in the European Junior Championships in both 1998 and 2000.

Parker plays the point guard position and has established himself as a potent scorer. Voted by his peers in a 2007 poll as one of the quickest players in the NBA, [ [http://sportsillustrated.cnn.com/2007/players/02/20/poll.0220/index.html SI Players Poll] , sportsillustrated.cnn.com, , accessed .] he often slashes to the basket for a or teardrop shot. Despite his relatively small size for a basketball player (6'2"), he led the league in "points in the paint" for a large portion of the 2005–06 season.

In the initial part of his NBA career, Parker was still considered an erratic shooter of the ball and during the 2005 off-season, coach Popovich decided to work on this aspect of his play. Seeing his mediocre shooting percentages (at that point, Parker only hit 65% of his s, and only 27.6% of his three point shots), he let him train extra sessions with Spurs shooting coach Chip Engelland.

Parker's parents continue to remain influential in his life even after their . His mother, a health-food coach, gives him tips on healthy eating, while he discusses his performance after each game with his father over the phone.

In the field of , Parker donates a block of 20 tickets for each home game to underprivileged youth.

Parker is an avid fan of music and rap. He has released a French hip-hop album with producer Polygrafic (Sound Scientists). The first single from the album "Top of the Game", featuring rapper and , was released in . The accompanying video features Spurs teammates , and , as well as former teammate . [Strong, Nolan, [http://www.allhiphop.com/hiphopnews/?ID=5010 "Spurs Tony Parker Records With Fabolous, French Album On The Way"] , allhiphop.com, , accessed .] He also made a video for another song off his album called "", which features Eva Longoria.

Parker was also involved in the Paris bid for the . His reaction to London's successful bid was: "I don't know what else we could have done. If we don't have it now, I guess we will never get it. The IOC seems to be very pro-Anglo-Saxon. I feel extremely gutted." [ [http://news.bbc.co.uk/sport1/hi/other_sports/olympics_2012/4655925.stm "Chirac 'disappointed' in defeat"] , bbc.co.uk, , accessed .]