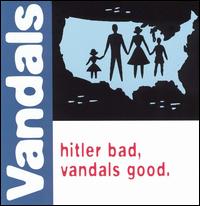 "Hitler Bad, Vandals Good" is the seventh studio album by the southern band , released in 1998 by . Much of the album is characterized by the pop-punk music and humorous lyrics for which the band is known, and it became their most popular and commercially successful album to date. While the band has utilized humor as a basis for much of their lyrical content throughout their career, the humor on their previous album "" had been rooted heavily in sarcasm and dealt with themes of nihilism and apathy. By comparison, the humor in "Hitler Bad, Vandals Good" is more lighthearted, dealing with subjects such as girlfriends, fast food and hairstyles.

The album contains two cover songs. "Come Out Fighting" was originally performed by fellow punk rock band Pennywise and is dedicated to the memory of Pennywise bassist , who had committed suicide the previous year. "So Long, Farwell" is a song from the musical "", which has here been re-interpreted using electric guitar, bass and drums as the closing song on the album.

An independent was later filmed for the song "My Girlfriend's Dead." Two different videos were released: One features the actual band members and was filmed as part of the movie "" in 2000, while the other is a fan-created animated video that was included on one of ' releases. The song "An Idea for a Movie" was used in the "", while "Euro-Barge" was used in "".

All information listed here is derived from song lyrics, album liner notes, and band member interviews and commentary (particularly those in the Vandals DVD "Live at the House of Blues").

*"People That Are Going to Hell" (Warren Fitzgerald)This song tells of the many people in the world who are mean and commit wrongdoings, but says that they will suffer the repercussions of their actions in the afterlife.

*"Café 405" (Josh Freese)The song is about a girl who works at a fast food franchise in the in , whom the singer has a crush on. Although not mentioned by name, the description of the restaurant in the song's lyrics closely resembles the franchise. The number 405 is in reference to the name of the food court at the Westminster Mall, called Café 405.

*"My Girlfriend's Dead" (Warren Fitzgerald)In this song a man is depressed because his girlfriend broke up with him, and instead of talking to people about it he chooses to tell them that she died.

*"I Know, Huh?" (Joe Escalante)The song describes a girl who the singer has a crush on, but the relationship is somewhat awkward because she is from a Hispanic family and he is not. Various factors such as her family and traditions interrupt their time together.

*"Money's Not an Issue" (Warren Fitzgerald)In this song the singer finds $20 under the sofa and decides to treat his girlfriend to an "extravagant" date.

*"I've Got an Ape Drape" (Joe Escalante)This song is about the hairstyle most commonly known as the mullet, in which the hair is worn short in the front and long in the back. The song offers several different names for this hairstyle as it is referred to in different locales.

*"If the Gov't Could Read My Mind" (Warren Fitzgerald)The song deals with a romantic crush. The singer believes in many government conspiracies and cover-ups, but is also infatuated with a girl. He says that therefore the conspiracies don't matter, because if the government was able to read his mind, all they would find are thoughts of her.

*"Too Much Drama" (, Joe Escalante, Josh Freese, Warren Fitzgerald)This song deals with divorce, as a child in a broken family escapes into the fantasy world of television. He wishes his family could be like those he sees in the idyllic sitcoms he watches. The song was co-written by Dexter Holland of , whose album "Americana" (released later that same year) contains the song "Walla Walla" which uses much the same melody and musical structure.

*"Come Out Fighting" (Jason Matthew Thirsk)A cover of a Pennywise song, dedicated to the memory of , the Pennywise bassist who had committed suicide in 1996. Both the Vandals and Pennywise originated in the Huntington and areas, and often shared stages together in the early 1990s. , who replaced Thirsk in Pennywise, had played in the band with Vandals singer Dave Quackenbush in the late 1980s. In later years Pennywise drummer Byron McMackin would sometimes act as a fill-in drummer for the Vandals. The song itself is has an anti-suicide message that encourages listeners to deal with their depression and loneliness by talking to family and friends.

*"Euro-Barge" (Josh Freese)The song concerns foreigners who do not share the same concept of "personal space" as Americans do. It drew additional attention to the band when it was included in the soundtrack to the "" .

*"F'd Up Girl" (Warren Fitzgerald)This song deals with a girl who is legally insane, suicidal, and requires lots of medication, so her boyfriend must provide her with constant supervision.

*"An Idea for a Movie" (Joe Escalante)The song tells of several ideas the singer has for movie concepts, all of which seem rather silly.

*"OK" (Dave Quackenbush)An uplifting song stating that even when the day-to-day things get you down, things will be okay in the future.