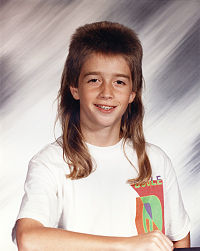 A mullet with spiked hair.

The mullet is a hairstyle that is short at the front and sides, and long in the back.[1] . The mullet began to appear in popular media in the 1960s and 1970s but did not become generally well-known until the early 1980s. It continued to be popular until the mid-1990s.[citation needed]

The term "mullet" was used frequently by George Kennedy's character Dragline in the 1967 American film Cool Hand Luke. According to the Oxford English Dictionary, the term mullet was "apparently coined, and certainly popularized, by U.S. hip-hop group the Beastie Boys",[1] who used "mullet" and "mullet head" as epithets in their 1994 song "Mullet Head".[2], although the term was used as early as 1982 in episode 3 of season 1 of the situation comedy Cheers. In that episode, the character Sam Malone calls a rude New York Yankees fan a "mullet head." The Beastie Boys' fanzine Grand Royal Magazine was the first to use the term in print.[1]

In Canada, the northern United States and Sweden, the hairstyle is sometimes known as "hockey hair" or "hockey player haircut", as it was common among ice hockey players in the 1980s, and this was a popular sport in all three regions during this time period.

The mullet in the Classical Period

The 6th century Byzantine historian Procopius' Secret History describes the actions of some of the Blue faction:

First the rebels revolutionized the style of wearing their hair. For they had it cut differently from the rest of the Romans...clipping the hair short on the front of the head down to the temples, and letting it hang down in great length and disorder in the back, as the Massageti do. This weird combination they called the Hun haircut.[3] 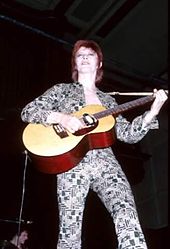 David Bowie during the Ziggy and the Spiders Tour 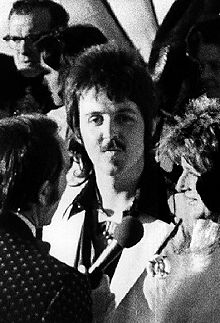 Paul McCartney sporting a mullet in 1974.

The modern mullet began to appear in the late 1960s, with Welsh pop singer Tom Jones sporting one. Glam rock artist David Bowie wore a proto-mullet in the early 1970s. Florence Henderson featured a mullet in the opening sequence of the television sitcom The Brady Bunch (1972–3 season), in the same year (1974) David Cassidy had a mullet on his television show "The Partridge Family". Paul McCartney sported a mullet throughout the 1970s when he was with Wings. The hairstyle achieved further popularity in the late 1970s and 1980s among entertainers with receding hairlines such as Anthony Geary of "Luke and Laura" fame from the soap opera General Hospital, and the rock performers Michael Bolton and Phil Collins, who had a mullet between 1985 and 1987.

As the 1980s progressed, big and bouffant mullets increased in popularity, and like other popular hairstyles at the time, often included spiking or blond highlights. Bands such as Kajagoogoo, Duran Duran and others, sported them and were labelled "hair bands". Many individual artists also embraced the cut. Limahl, Billy Ray Cyrus and David Bowie are a few, made famous by their outrageous hair. Nik Kershaw, Bono, Sting and Peter Gabriel also wore mullets as the decade progressed. Australian Rules footballers were instrumental in establishing the popularity of the mullet in Australia. Notable players included Warrick Capper and Dermott Brereton. The mullet is well known and widely remembered in Germany, where it is known as the "Vokuhila", which is an acronym for "vorne kurz, hinten lang" or "short in front and long in back". The stereotypical German image of the mullet is epitomized by 1980s soccer teams and their fans, as well as by the ubiquity of the hairstyle in images dating from the fall of the Berlin Wall. This fact has led to an unfortunate tendency to associate the mullet with negative stereotypes of the former East Germany, which is probably not fair[opinion], as the hairstyle was also popular in West Germany and elsewhere at the time[citation needed]. The zenith of the mullet's popularity in 1980s continental Europe has been described as an "age of singing tattooed Swedish Flokati Rugs".[4] Richard Dean Anderson wore a mullet in the title role of the popular TV series MacGyver." Footballers such as Rudi Voeller and Chris Waddle were arguably as famous for their mullet haircuts as their footballing skills[opinion].

Superman was drawn as having a mullet from issue 505 (1993) to 544 (1997)[5] of Adventures of Superman comic and this look was released in action figure form by Mattel in 2009.[6] In the mid to late 1990s the "tail" of the mullet was occasionally "permed" with loose or tight curls adding even more internal composition contrast to the hairstyle.[citation needed] Punk rock band The Vandals sang of country music singers and Jerry Springer Show guests sporting mullets, and listed regional names for the style in the 1998 song "I've Got an Ape Drape".[7] Country Music singer Billy Ray Cyrus was also known for his mullet. Sanjay Dutt also kept mullet in 90s. [8]

The mullet and its associated lifestyle have been central themes in movies such as Joe Dirt "business in the front party in the back" (2001), and the television show The Mullets (2003–2004).

The mullet can still be seen among certain social groups in various countries. In Spain, it was associated with the Basque independence movement, which claims working-class origin. In Denmark, it is associated with Swedes, presumably because it is popular in Sweden. In Canada and the USA the mullet is particularly associated with blue collar men, fans of country and ice hockey players. In the United Kingdom the mullet is most commonly associated with thugs, Pat Sharp or with professional footballers. In Australia the haircut is associated with Bogans and NRL players, particularly those from the 1980s, as well as Lebanese-Australian youths. Jared Allen of the Minnesota Vikings has a recognizable mullet. In Sweden it is referred to as "hockeyfrilla" (hockey-cut) - perhaps because many Swedish hockey players played in Canada and adopted the hairstyle.

In Finland mullet is sometimes called "lätkätukka" (hockey hair) or "tšekkitukka" (Czech hair), the latter a likely reference to Czech-born NHL hockey star Jaromír Jágr, who during his glory years wore a curly mullet long enough to obscure his jersey number. Jágr became so well-known with the style that when he decided to cut it off in 1999, his new haircut actually made headlines.

Singer Billy Ray Cyrus was also known for his distinctive mullet and frequently jokes about it on the American television show, Hannah Montana. One episode had his character "impersonating" his real-life counterpart by donning a fake mullet.

Understated variants of the mullet are a popular hairstyle for young men and boys in Russia and many parts of Asia such as China, and Thailand.[citation needed]

In July 2010, the Islamic regime of Iran issued grooming guidelines to men supplementing the existing modesty stipulations to women. Among the new regulations is a ban of the mullet hairstyle. The ban on mullets is one of the measures that Iran has deployed to "confront the cultural assault by the West." The regime aims to promote a set of new Islamic hairstyles that were unveiled at the Hijab and Chastity Festival of 2010.[9][10] Dance Gavin Dance singer Jonny Craig sports the hairstyle.

Solid Snake and Big Boss, heroes of the Metal Gear game series are both known for their mullet.