Sonic the Hedgehog 3 (often abbreviated and officially titled in Europe and Australia as Sonic 3) is a 1994 platform video game in the Sonic the Hedgehog series for the Sega Mega Drive/Genesis. It was developed in the United States by members of Sonic Team working at Sega Technical Institute, and was published by Sega,[2] debuting worldwide in the first half of 1994. The game is a sequel to Sonic the Hedgehog 2 and follows on directly from the end of the game, in which Sonic defeated his enemy, Dr. Robotnik; crash-landing on a floating island, Sonic encounters new character Knuckles the Echidna, and must once more retrieve the Chaos Emeralds while also working to stop Dr. Robotnik from relaunching his ship, the Death Egg.

The game is closely tied to its direct sequel Sonic & Knuckles, as the two games were originally one until time constraints and cartridge costs forced the game to be split into two interlocking parts. A version re-worked for Xbox 360 was released via Xbox Live Arcade on June 10, 2009 with support for HD televisions.[3] 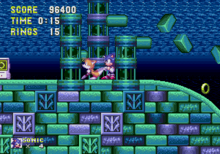 Sonic and Tails in the second zone, Hydrocity.

The game features two main modes, Single Player and Competition. In the Single Player mode, players can choose a save slot which can save their progress, a first in the series, and choose between playing as either Sonic the Hedgehog, Miles "Tails" Prower, or Sonic with Tails as a partner. In the latter, the player controls Sonic whilst the computer controls Tails, who can be controlled by a second player at any time. The game is made up of six Zones, each containing two Acts with a boss at the end. At the end of each first act, a signpost falls from the sky, which can be juggled for extra points and may occassionally drop bonus items when it lands. When the game is cleared, players become able to choose a Zone to start on from the save select screen.

Building on the gameplay of Sonic 2, which introduced the Spin Dash, characters now have unique abilities, performed by pressing the jump button whilst in the air. Sonic can perform an 'insta-shield' attack, which grants him a split second burst of protection and expands his attack range, allowing him to attack enemies that would otherwise harm him. Tails on the other hand, has the ability to fly in the air or swim underwater for a short amount of time before he gets tired and comes back down, allowing him to explore areas Sonic cannot. Whilst flying, his tails can be used to attack enemies. During a team game, a second player controlling Tails can carry Sonic whilst flying. The game also introduces three kinds of shields; thunder, which protects against electricity and magnetically attracts rings, fire, which protects against fire attacks, and bubble, which allows its wearer to breathe underwater. When Sonic uses these shields, he can perform an additional skill based on his shield. 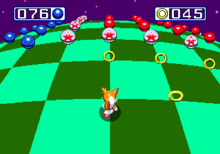 One of seven Special Stages in Sonic 3.

Hitting star post checkpoints whilst carrying 50 rings a more allows the player to access a gumball bonus stage, in which bonus items such as rings, shield and extra lives can be won. Special Stages can be entered by finding giant rings hidden throughout each stage. In these stages, players navigate a three dimensional space where the goal is to collect all the blue spheres in the level without touching any red ones. Collecting blue spheres transforms them into red ones, but if a player goes around the edge of a group of blue spheres at least 3x3 in size, all the spheres in that group will transform into rings, which can earn continues if enough are collected. Successfully completing these Special Stages earns the player a Chaos Emerald, which players able to access the good ending if all seven are collected. Additionally, if Sonic collects all seven emeralds, he can transform into Super Sonic after collecting at least 50 rings. Additional emeralds known as Super Emeralds can be obtained if the game is locked on with Sonic & Knuckles, which enable Sonic and Tails to become Hyper Sonic and Super Tails with unique abilities.

A diagram of how rings are generated by walking the perimeter of a group of blue spheres.

Competition Mode is a competitive mode in which two players, playing as either Sonic, Tails or Knuckles, race against each other through five laps on an endless course. During the game, players can collect items to either help themselves or hinder their opponent. There are three game types available: Grand Prix, in which all five tracks are playing continuously, Single Race, where a single track is chosen to race on, or Time Trial, a single player mode in which players try to clear the five laps in the quickest time possible.

The Sonic 3 storyline commences shortly after the end of Sonic the Hedgehog 2 - Dr. Robotnik's[4] space station, the Death Egg, has been knocked out of its orbit after his mech suit exploded in a final showdown with Sonic, causing critical damage to the ship.

However, instead of impacting the planet, the Death Egg crash-lands on [5] a mystical floating landmass called Angel Island that had previously been reputed only by legend to exist. As Dr. Robotnik begins to repair the ship, he meets up with Knuckles the Echidna. Knuckles is the last surviving member of an ancient civilization of Echidnas that once inhabited the island, whose ruins and relics are scattered throughout. He is also the guardian of the Master Emerald, which grants the island its levitation powers.[6]

Knowing Sonic and Tails will try to track him down, and realizing he can use the Master Emerald to power the ship, Dr. Robotnik tricks Knuckles into believing Sonic is trying to steal his Emerald. Shortly after, Sonic and Tails in their biplane, the Tornado, are in search of Dr. Robotnik. Sonic then turns into Super Sonic. As soon as they arrive, Knuckles ambushes Sonic from underground with such force, he knocks the Chaos Emeralds from him, returning him to normal. Stunned, Sonic can only watch as Knuckles steals the Emeralds and disappears inland. As Sonic and Tails travel through the levels, they encounter Knuckles in almost every level.

In the Launch Base Zone, Sonic travels through to see Knuckles blow up the building that they are in. They manage to escape the building and find Dr. Robotnik. After they defeat Robotnik, he leaves his Egg-O-Matic behind. Sonic travels in it, and finds Knuckles standing on top of a pole trying to prevent Sonic from continuing onwards. As the Death Egg launches off for the second time, it knocks Knuckles off the pole sending him plummeting to the ground. Sonic travels to a platform on the Death Egg, while Robotnik awaits them there. Sonic and Tails defeat Robotnik for the last time, and the Death Egg is seen falling and exploding. The story then continues in Sonic & Knuckles.

Yuji Naka and Hirokazu Yasuhara were mainly responsible for the Sonic 3 design document and project schedule.[7] Sonic 3 originally began as a top-down, isometric game, similar to what would eventually become Sonic 3D. This concept was abandoned early into development, after the team did not want to change the Sonic formula too radically for a sequel.[8]

Sonic 3 and Sonic & Knuckles were originally planned as one single-cartridge game. However, as time constraints and the manufacturing costs of a 34 megabit cartridge[9] with NVRAM would have been prohibitively expensive, the decision was made to split the game in half, giving Yuji Naka and the other developers more time to finish the second part, and splitting the high cost between two cartridges.[10] Because of the split development, a lot of extra data from Sonic & Knuckles is still present on the Sonic 3 cartridge.[citation needed]

The cartridge has a small amount of non-volatile RAM built into it, which allows the player to save game progress to the game cartridge.

Sonic Generations includes several highlights of Sonic 3 such as a remake of the Launch Base Zone Boss Battle exclusively for the 3DS and also Seaside hill with Boulders chasing Classic Sonic and underwater style similar to the Hydrocity zone level and Rooftop Run (Classic Sonic Version) includes the unexpected arrival of Flying Battery Zone which Classic Sonic causes to crash after boarding it briefly. Finally the Sonic 3 game over theme was remixed as the game over theme for Sonic Genrations. Apart from what was previously mentioned no actual regular stage was remade from Sonic 3 for Sonic Generations as it is represented as Sonic 3 & Knuckles.

According to STI director Roger Hector, Michael Jackson was initially brought in during development to compose music for the game, even though no mention of his involvement was included in any of the game's credits. This was supposedly due to the scandals that arose around Jackson at the time. His involvement was removed from the title, and much reworking, including all the started music, had to be done.[11] These claims are dubious, however, and various interviews have made it clear that any involvement Jackson may have had was done without the knowledge of Sega's executives or marketing staff, and no contracts or formal agreements had ever been made.[12] James Hansen, of Sonic Stuff Research Group, retorts that Cirocco (credited as "Scirocco" in Sonic 3) still has possession of presumably a demo version of fabled soundtrack. "I actually have "ALL" of the tracks...," he writes, "from the original humming of Michael calling in the middle of the night leaving messages, to his ideas at Record One with Matt and Bruce. - BUT, I don't think I can let any of that out to the public without permission." [12] In December 2009, Michael Jackson's composer, Brad Buxer, told French magazine Black & White that Jackson was actually involved with some of Sonic 3's compositions, supposedly not being credited because he wasn't happy with how they sounded, due to the lack of optimal sound reproduction on the Genesis. Buxer also claimed that the ending music of Sonic the Hedgehog 3 later became the basis for Jackson's single Stranger in Moscow.[13]

Sonic 3 was released in the US on February 2, 1994, dubbed "Hedgehog Day", a reference to Groundhog Day. Toys "R" Us rewarded preorders with the limited edition CD Sonic Boom, containing music from and inspired by Sonic CD and Sonic Spinball.[14]

In Europe, Sonic 3 was released on February 24, 1994. To help promote the game, Right Said Fred wrote the song Wonderman, including references to many aspects of Sonic.[15] The song was used both in the game adverts, and released as a single, which charted in the UK at number 55. In the music video, Fez and Skull from the Pirate TV Sega advertising campaign appeared along with Sonic.

To help support the game launch, issues 33 and 34 of the Fleetway comic, and issue 13 of the Archie comic used elements from Sonic 3 in their own comic adaptations of the game.

Although Sonic 3 did not perform as well as Sonic 2 in terms of sales (1.8 million to 6.3 million),[citation needed] the game was mainly well-received by fans and critics alike, scoring aggregate reviews of above 80%.[16][17][18]

The game also appears in Sonic's Ultimate Genesis Collection ("Sega Mega Drive Collection" in Europe) for Xbox 360 and PlayStation 3 on February 2009 and is on Sonic Classic Collection for Nintendo DS released on March 2, 2010.

The game was announced for the Xbox Live Arcade in May, 2009.[20] It was released on the 10th of June, 2009. This version has enhanced graphics for high definition displays as well as online leaderboards and support for multiplayer via split screen and Xbox Live. The original savegame slot feature of Sonic 3 in previous incarnations was replaced with the 'Vintage' savegame functionality which was used in Xbox Live Arcade versions of Sonic the Hedgehog and Sonic 2. While this allows progress to be saved anywhere during play, the possibility to replay levels after the game has finished with the current number of collected emeralds, extra lives and continues is lost.