Following the trend of recent Sonic games such as Sonic Adventure and Sonic Heroes, Shadow the Hedgehog is a 3D platform game. Most levels have three possible missions – "Hero," "Dark," or "Normal" – that the player may choose to complete; some levels have only "Hero" and "Dark" missions. The missions completed determine the game's plot and subsequently playable levels, a feature referenced by the game's tagline, "Hero or villain? You decide." The plot centers on the attempt of Shadow, a creation of Doctor Eggman's grandfather, Professor Gerald Robotnik, to learn about his past after suffering from amnesia. To defeat enemies, Shadow can use various weapons and special attacks.

Shadow the Hedgehog was created for the Nintendo GameCube, PlayStation 2, and Xbox video game consoles, and it was released in 2005 in North America on November 15, Europe on November 18, and Japan on December 15. Upon release, the game received mixed to negative critical reviews; critics criticized its "dark" theme, especially the addition of guns and other weapons to traditional Sonic gameplay, but praised its replay value.

Shadow the Hedgehog is a platform game that incorporates elements of action-adventure gameplay. Like previous games in the Sonic series, basic gameplay involves running quickly, collecting rings, and destroying enemies.[1][2] Shadow collects rings as a form of health; when he is attacked by an enemy, his rings bounce in all directions. If he is hit by an enemy and has no rings, he loses a life.[3] Levels are completed by undertaking missions, labeled "Hero", "Dark", or "Normal."[4] The "Hero" missions involve completing tasks for the series' heroic characters[5] whereas the "Dark" missions involve completing tasks for the Black Arms or Doctor Eggman (sometimes in the gameplay Eggman has tasks for "Hero" missions). The "Normal" missions involve simply reaching the Chaos Emerald or goal at the end of the level.[4] Enemies attack Shadow regardless of the side chosen.[2][3] The mission types selected affect the plot, the levels played, and the ending received out of ten possibilities.[4][6] Each level features cut scenes to advance the story, and several levels also feature boss battles. 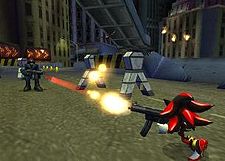 Shadow uses a gun to defeat a G.U.N. soldier. The weapons' violent theme and mechanics were two major areas of criticism.

New gameplay features distinguish Shadow the Hedgehog from previous games in the series that feature Sonic as the main playable character. For example, Shadow can use weapons including guns to combat enemies, adding an element of third-person shooter gameplay.[3] Parts of the scenery, such as traffic signs, can also be used as weapons.[4] Also new are vehicles, such as motorcycles and alien aircraft, that Shadow may drive.[1][3] Although Shadow can outrun the game's vehicles, the latter have some additional capabilities, such as hitting and running over enemies, or traversing an otherwise impassible acid-covered area. As in most Sonic games, the Chaos Emeralds play a major role; they help Shadow remember his past[7] and allow him to perform Chaos Control and Chaos Blast. Chaos Control allows Shadow to move more quickly in levels and slows time in boss battles, and Chaos Blast creates an explosion that destroys all nearby enemies. Shadow can perform Chaos Control after the player fills the Hero Gauge by defeating Black Arms soldiers, and he can perform Chaos Blast after filling by Dark Gauge by defeating G.U.N. soldiers.[1]

The game includes a two-player mode[8] that retains the basic single-player mechanics but is set in one of three specially designed stages and uses a vertically split screen to separate each player's view. Each player chooses one of the available characters—Shadow, two metallic versions of him, and palette-swapped variants of each. The combatants attack each other and steal each others rings until one is eliminated. The game also allows a second player to take control of Shadow's sidekick character in some stages in single-player mode.[9]

Shadow the Hedgehog, the game's protagonist, was created fifty years before the game's events by Professor Gerald Robotnik in a military research space station known as the ARK. Robotnik was trying to unlock the secrets of eternal life on the government's orders and create the "Ultimate Life Form." To that end, Robotnik designed Shadow to be able to harness the powers of the Chaos Emeralds.[10] At the end of Sonic Adventure 2, his first in-game appearance,[11] he was presumed dead, but returned in Sonic Heroes with amnesia that persists into the events of Shadow the Hedgehog.[3][6] The game more deeply explores Shadow's character than previous games.

The Guardian Units of Nations (G.U.N.) is the military of Earth's government, the United Federation, and it is directed by the G.U.N. Commander. When completing "Hero" missions, Shadow helps G.U.N.[10] and heroic characters from the Sonic series, including Sonic the Hedgehog, Miles "Tails" Prower, Knuckles the Echidna, Amy Rose, Rouge the Bat, E-123 Omega, Charmy Bee, Vector the Crocodile,[5] and Espio the Chameleon.[12] Their aim is to protect Earth from Doctor Eggman and the alien Black Arms. Black Doom, the leader of the Black Arms, sends an extension of himself called Doom's Eye to spy on Shadow and help him complete his missions. When completing "Dark" missions, Shadow helps either Doctor Eggman or Black Doom, each of whom wants the Chaos Emeralds for himself.[10] 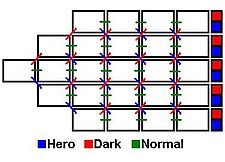 Completing "Hero," "Dark," or "Normal" missions determines which levels are subsequently playable. Each white box represents a level, and each red or blue box represents a boss mission at the end of the game. The colored lines that connect levels show how the completion of certain missions affects the storyline.

At the beginning of Shadow the Hedgehog, which takes place three months after the events of Sonic Heroes, Shadow, still suffering from amnesia, remembers only two things: his name and "that gruesome image" of his attempt to escape the space station ARK with Gerald Robotnik's granddaughter Maria and her death by gunshot from G.U.N. soldiers.[13] He wonders whether he is an android due to hints given in Sonic Heroes.[11] The game begins with Shadow reminiscing outside the city of Westopolis when the Black Arms drop out of the sky and invade it. Doom's Eye approaches Shadow, and Black Doom tells Shadow of an old agreement for Shadow to bring him the Chaos Emeralds.[10][14] Stunned that Black Doom knew his name, Shadow realizes that he must find the Chaos Emeralds to learn his past.[15]

The game progresses through the Westopolis level and five more levels from the different paths Shadow can take. As missions are completed, Shadow learns more of his past.[1][11] He can choose to help the Black Arms or Doctor Eggman (Dark), to help G.U.N. and the series' heroic characters (Hero),[10] or to help neither and keep the Chaos Emeralds for himself (Neutral).[7] The missions completed determine which one of ten possible endings will be seen after Shadow collects all the Chaos Emeralds and defeats one of the game's final bosses.[16] The possible ending events range from planning to defeat the Black Arms[17] to planning to destroy the planet.[18]

Completing all ten endings unlocks a final ending in which Black Doom uses Chaos Control, enhanced by the power of all seven Chaos Emeralds, to bring the Black Comet to Earth. Shadow then confronts Black Doom on the "Black Comet" level, where he discovers that Professor Gerald Robotnik created the ARK's Eclipse Cannon weapon to destroy the Black Comet.[19] During their confrontation, Black Doom attempts to control Shadow through mind control but fails,[20] prompting him to transform into his "Devil Doom" form.[21] In response, Shadow uses the Chaos Emeralds to transform into his "Super Shadow" form and defeats Black Doom.[22] Shadow then transports the Black Comet into outer space using Chaos Control and obliterates it with the ARK's Eclipse Cannon.[23] His friends are elated,[24] as are people at G.U.N. headquarters.[25] Inside the control room of the ARK, Shadow holds an old photograph of Maria and Gerald. He discards the photograph, declaring "Goodbye forever... Shadow the Hedgehog," and leaves the room.[26]

Shadow the Hedgehog was developed by Sega Studio USA, the now-defunct United States division of Sega's Sonic Team, and published by Sega.[6] The game and its tagline ("Hero or villain? You decide.") were revealed at the March 2005 inauguration of Sonic the Hedgehog into the Walk of Game.[28] The game was formally announced by Sega on March 23.[11]

Sonic Team's Takashi Iizuka, who had worked on the Sonic the Hedgehog series since 1993, targeted a younger audience with previous games, and wanted to target an older audience with Shadow the Hedgehog.[27] The game's development team wanted to make a game featuring Shadow to resolve plot mysteries that began with the character's introduction in Sonic Adventure 2.[11] The team felt that Shadow's design—inspired by films such as Underworld, Constantine, and the Terminator series—would make the story darker and allow for elements, such as vehicles and weapons, otherwise considered inappropriate for a Sonic game.[4] Sonic Team's Yuji Naka stated in an interview with GameSpy that he wanted to use Shadow as the game's main character due to his popularity among fans and being the best fit for a "gun action" game.[29] The game contains profanities, including instances of damn and hell spoken by Shadow[18][30][31][32] and other characters such as Espio,[12] the President,[33] and even Sonic. Profanity and the usage of guns, firsts for the series, generated some pre-release controversy.[3][29]

Shadow the Hedgehog was created for the Nintendo GameCube, PlayStation 2, and Xbox video game consoles. The game received an ESRB rating of E10+ for "fantasy violence" and "mild language".[1][10]

Lost and Found: Shadow the Hedgehog Vocal Trax is a video game soundtrack album released as a CD in February 2006. The album contains seven songs, one of which is a remix rather than master track.[34]

Critics derided the game's unwelcome sense of maturity for a Sonic game, especially the addition of guns.[47] Game Informer staff writer Matt Helgeson said, "not only is this new 'adult' interpretation of Sonic painfully dumb, it’s also ill-advised and almost feels like a betrayal to longtime fans."[43] Eurogamer staff writer Tom Bramwell felt that "the game's other selling point – its darker edge – [is] not really meant for us."[42] G4's X-Play and GameSpy staff writer Patrick Klepek thought similarly.[44][49] In contrast, Nintendo Power staff writer Steve Thomason rated the game 8.0 out of 10, stating, "[t]his darker take on the Sonic universe succeeds for the most part, giving the series a bit of an edge without going overboard on violence."[47]

Critics also criticized the game's controls, especially Shadow's homing attack causing unexpected character deaths. Game Informer's Matt Helgeson complained that the attack "frequently sends you careening off into nothingness, resulting in cheap death after cheap death."[43] Nintendo Power, X-Play, Eurogamer, Official Xbox Magazine, and GameSpy agreed.[42][44][47][48][49] Other complaints focused on the mechanics of weapons and vehicles. Greg Mueller of GameSpot felt that the guns were nearly useless because of a lack of a target lock or manual aim, combined with an ineffective auto-aim.[9] IGN staff writer Matt Casamassina, 1UP.com staff writer Greg Sewart, Game Informer, X-Play, GameSpy, and London's The Times also criticized the mechanics of Shadow's weapons and vehicles, and other aspects of the game's controls.[2][43][44][45][49][50] However, Nintendo Power claimed, "blasting Shadow's foes with the wide variety of weapons at his disposal is just plain fun."[47]

Critics praised the game's replay value, applauding the many possible paths that a player may take through the game. Rating the game 8.3 out of 10, GameTrailers stated, "this choose-your-own-adventure style gives the game replay value that many platformers lack."[3] The Melbourne, Australia, publication Herald Sun, and Official Xbox Magazine thought similarly.[13][48] Nintendo Power agreed, but criticized the difficulty of the missions that require the player to locate objects.[47] GameSpot praised the game's variety of levels and its music.[9] Shadow the Hedgehog was voted the best game of 2006 in the Official Jetix Magazine Reader Awards.[54]