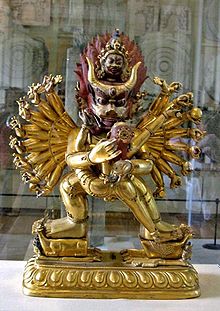 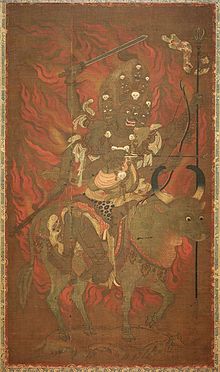 Yamāntaka is a Sanskrit name that can be broken down into two primary elements: Yama, the name of the god of death; and antaka, or "terminator". Thus, Yamāntaka's name literally means "the terminator of death".

"Yamantaka" or "Shri Bhagavan Yamantaka" (श्री भगवान् यमान्तक; Glorious Lord Making an End of Yama*) is another name for [Shri] Vajra[maha]bhairava, who is the highest emanation of Bodhisattva Manjushri. Bodhisattva Manjushri, Shri Vajrabhairava and Shri Bhagavan Yamantaka together represent the [Buddha]dharmakaya (Body of [Enlightened] Doctrine) which is also called Vajradhara (Holder of the Thunderbolt) because it holds to the pledge of the thunderbolt (vajrasamaya) which is the pledge to carry out the action of the Buddha.

How does Yamāntaka terminate death?

This question depends upon the meaning ascribed to the term death – but one way in which this ability can be identified is through the enlightening activity of wisdom. The wisdom mind is able to perceive that death has no intrinsic, concrete existence: our understanding of death emerges solely from the conventions of the world. Also, when we achieve the same realisation of Yamantaka - who is a Buddha - then we have transcended death.

There are three types of death spoken of in the Yamāntaka Tantra : Outer death is the regular end of life, which is embodied by Yama, Lord of Death, who resides in the south, seven stories under the earth. The inner death is ignorance of the true nature of non-dual reality. Instinctive habitual grasping and aversion to objectively "real" objects and subjects arises from this ignorance. The secret death is dualistic appearance on the subtlest level of clear light mind and illusory body. With the practice of Yamāntaka one overcomes those types of death and gains immortality as a Buddha.

In Japanese esoteric teachings, he is known as Daiitoku Myoo (大威德明王) and is the wrathful emanation of Amida Nyorai and is pictured with six faces, legs and arms holding various weapons while sitting on a white cow, symbolizing pure enlightenment.