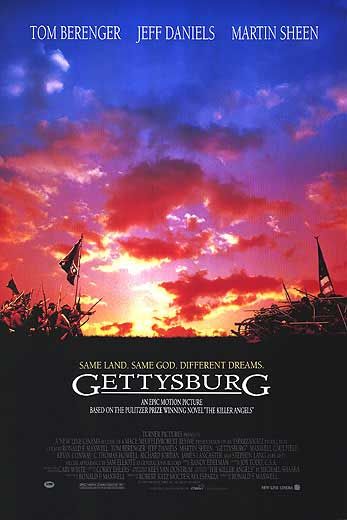 The film follows the plot line of "Killer Angels". The focus on the first day is on John Buford, who selects the battlefield. The focus on the second day is Joshua Chamberlain's defense of Little Round Top. The focus on the following evening is on preparation for and the execution of Pickett's Charge. Lewis Armistead is the major focus of those scenes.

The film was originally intended to have been a TV . The producers originally pitched the project to ABC in 1991. ABC initially agreed to back the project, but when a about got low ratings, ABC pulled out. It wasn't long until media mogul picked it up and the film went into production.

For the first time, the allowed the to recreate and film battle scenes directly on the , including scenes of and . However, much of the movie was shot at a nearby Adams County farm. Thousands of Civil War reenactors from across the country volunteered their time and expense to come to Gettysburg to participate in the massive battle scenes.

The miniseries was set to air on TNT. But when Turner saw part of the film during post-production, he realized it was much bigger than a miniseries and decided to released the film theatrically. The film was distributed by which Turner would acquire a year later. Released in fewer than 150 theaters nationwide, and limited to only two showings or less per day because of its length, the film still managed to gross over ten million dollars at the box office. It would go on to become an all-time high seller on the VHS and DVD market, and has become a staple of classroom history lessons. Its broadcast TV premier on TNT in June of 1994 garnered over 23 million viewers, a record for cable TV at the time. Civil War buff Ted Turner has a in one of the battle scenes as Colonel . During Major General Pickett's () charge, some Confederate troops come to a fence that they have to climb over. Turner plays the Confederate officer who leads the charge, then gets shot down.

Another cameo appearance is by Civil War buff , who wrote and directed the epic PBS documentary, "The Civil War". He portrays an aide to Major General Hancock () during Pickett's Charge. He can be seen saying "General, please get down. We cannot spare you," to Hancock, to which Hancock replies with his famous quotation, "There are times when a corps commander's life does not count."

One of the longest films ever released by a Hollywood studio, "Gettysburg" runs 254 minutes (4 hours, 14 minutes) on VHS and DVD. A "Director's Cut", with several extended or deleted scenes, was produced and sold as a part of a special "Collector's Edition" released on VHS and , which also included 's book of Gettysburg paintings, an original Civil War lead , some stock photographs of key officers from the battle, and other items. The editor's cut has not appeared on any DVDs to date. Ron Maxwell's 271-minute (4 hours, 31 minutes) has been shown on Turner's TNT Station regularly. This version is not available on DVD.