Denver Sylvester Dickerson (January 24, 1872 – November 28, 1925) was an American politician. He was the 11th Governor of Nevada from 1908 to 1911. A member of the Silver – Democratic coalition party,[1] he had previously held office as the 13th Lieutenant Governor of Nevada from 1907 to 1908. During his governorship, Dickerson worked to reform the state prison system.[2]

After leaving office, Dickerson became the Superintendent of Federal Prisons, predecessor to the present-day Federal Bureau of Prisons. He was the warden of Nevada State Prison until his death in 1925.[2]

Dickerson was born on January 24, 1872 to Harvey and Catherine Dickerson in Millville in Shasta County, California, where he was raised as a Christian.[3] His father was a mining pioneer in California.[4] Dickerson received a public school education and was later privately tutored.[4] Dickerson pursued mining in California, Idaho, and Montana.[5]

During the Spanish American War in 1898, Dickerson was deployed as Sergeant of Troop D of the 2nd U.S. Volunteer Cavalry. Upon returning from his tour of duty as First Sergeant in 1899,[4] Dickerson moved to White Pine County, Nevada.[5]

In 1906, Dickerson decided to run for Lieutenant Governor of Nevada.[7] While attending the Democratic State Convention in Reno as a young delegate, he discovered that no one was interested in running for the office.[8] In May of that year, he handed over control of the White Pine News to Houlden Hudgins and sold it in the fall.[7] On October 11, 1906, Dickerson founded the Ely Mining Expositor as a weekly paper representing the interests of the Silver-Democratic political coalition. Dickerson won the November election and took office in January 1907. The Ely Mining Expositor was helmed by various editors while Dickerson was in office and moved to daily publication by May 15, 1907.[9]

When fellow Silver-Democrat and Governor John Sparks died in office on May 22, 1908, Dickerson became the acting governor.[2] The Dickersons became the first family to move into the Nevada Governor's Mansion, recently completed at a cost of $22,700.[10] On September 2, 1909, Una gave birth to June, the only child to be born in the mansion.[6] During his gubernatorial tenure, Dickerson worked to restructure state mental hospitals and reform the state prison system. He also found support to reorganize the state railroad commission.[2]

The "Fight of the Century"

In 1910, former undefeated boxing champion James J. Jeffries sought to reclaim the heavyweight championship as the "great white hope" from African-American Jack Johnson.[11] Dickerson was impressed by Johnson's boxing skills and pledged to provide an opportunity for a match in Nevada without racial prejudice.[12] Despite national pressure against staging the event, Dickerson allowed it to proceed in Reno.[13] Promoter Tex Rickard received a demand from Dickerson that the fight not be fixed.[14] On July 4, 1910, Johnson defeated Jeffries,[11] causing a wave of unrest across the country.[15] In November 1910, Dickerson was defeated in his bid for a second term and left office on January 2, 1911.[2]

After leaving the governor's office, Dickerson was appointed superintendent of the Nevada State Police.[16] In 1913, Dickerson was appointed the Warden of Nevada State Prison in Carson City to replace George W. Cowing,[17] who had problems finding men willing to form a firing squad to execute convicted murderer Andriza Mircovich.[18] The death sentence was eventually carried out by a custom-built shooting machine.[17]

Dickerson took office as the Superintendent of Federal Prisons in January 1920 under U.S. President Woodrow Wilson.[19] In September 1920, Jack Johnson was sent to the U.S. Penitentiary in Leavenworth, Kansas for incarceration while under Dickerson's administration.[20] Dickerson worked to have Johnson paroled against unsubstantiated charges.[21] Dickerson resigned on April 2, 1921,[22] when newly elected President Warren G. Harding announced that he would appoint his brother-in-law Heber Herbert Votaw to the office.[23]

In December 1923, Dickerson returned to Nevada State Prison.[2] He supervised the execution of Gee Jon in February 1924, the first to be carried out by gas chamber in the United States.[24] Dickerson remained warden until his death in November 1925.[2] 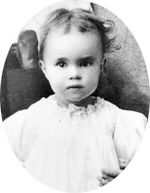 June Dickerson was the only child born in the Nevada Governor's Mansion.

Dickerson was buried at Lone Mountain Cemetery in Carson City.[2] Afterwards, his wife Una became a librarian at the Law Library in Reno, Nevada. She later retired in Reno and died on April 9, 1950.[6] Una was buried next to her husband, but her ghost reportedly haunts the governor's mansion.[25]

The Dickersons had eight children:[26] Harvey, Norinne, June, Donald, Denver, Belford, Barbara and George.[3] Their sons Harvey, Denver, and George followed their father's footsteps into Nevada state politics. Harvey Dickerson became the Attorney General of Nevada in 1955 and unsuccessfully ran for governor in 1958.[27] The younger Denver Dickerson would go on to become the Speaker of the Nevada Assembly in 1943 and was appointed Secretary of Guam in 1963 by President John F. Kennedy.[28] George M. Dickerson was elected District Attorney of Clark County, Nevada in 1954 and President of the State Bar of Nevada in 1973.[29][30]

Other offices and affiliations