Mary Theresa Brunner (born December 17, 1943) is a former member of the Manson Family who was present during the 1969 murder of Gary Allen Hinman, a California musician and UCLA Ph.D. candidate in sociology.[1][2] Brunner was subsequently arrested for numerous offenses, including credit card theft and armed robbery, and served a prison sentence at the California Institute for Women.

Born and raised in Eau Claire, Wisconsin to John and Evelyn Brunner, she moved to California upon graduating from the University of Wisconsin–Madison in 1965 after receiving a job offer as a library assistant at UC Berkeley. There, she met 33-year-old career criminal Charles Manson, who had been released from Terminal Island prison for a parole violation several weeks prior to their meeting. She let Manson stay at her apartment and, after a period of weeks, the two began sleeping together. Not long after the relationship began, Manson traded a newly acquired friend's piano for a cheap Volkswagen van, Brunner quit her job, and the two began to drift around California meeting other young women.

In 1967, Brunner became pregnant by Manson and on April 15, 1968 gave birth to a son she named Valentine Michael (nicknamed "Pooh Bear")[3] in a condemned house in Topanga Canyon and was assisted during the birth by several of the young women from the Family. Brunner (like most members of the group) acquired a number of aliases and nicknames, including: "Marioche", "Och", "Mother Mary", "Mary Manson", "Linda Dee Manson" and "Christine Marie Euchts".[4]

After arriving in Venice, California, Brunner and Manson met 18-year-old Lynette Fromme and the three began living together in a rented house at 636 Cole Street in San Francisco. Over the course of the following two years, the Family enlarged to include between 20 and 30 individuals living communally; some, like Brunner and Fromme, became ardent followers of Manson, while others drifted in and out of the group.

On April 21, 1968 Brunner and eight other Family members, including: Manson, Ella Jo Bailey, Dianne Lake, Nancy Pitman, Susan Atkins, Bruce Vann Hall, Marcus John Arneson, Stephanie Rowe and several others were arrested by sherriff's deputies in Little Sycamore Canyon, Santa Clara, California after they were found sprawled nude around a campfire beside a 1952 bus that had been reported stolen in San Francisco on April 12. Manson was remanded into custody under the suspicion of grand theft auto. Rowe, Atkins and Hall were charged with possessing fictitious and fraudulent driver's licenses. Pitman, Arneson and Bailey were jailed on charges of disorderly conduct and not possessing proper identification. Five other Family members were released without being charged. Brunner was booked on suspicion of endangering the life and health of a child, after her one week-old son, Valentine was found by deputies improperly dressed and shivering.[6] The baby was placed in the care of the Ventura County General Hospital. Charges against Brunner were later reduced to contributing to the delinquency of a minor and she was given two years probation and a 15-day suspended jail sentence. Brunner subsequently told authorities she planned to return to her parents' home in Wisconsin and Valentine was returned to her.[7]

On July 25, 1969, 21-year-old Family member, musician and aspiring actor Bobby Beausoleil left Spahn Ranch, accompanied by Brunner and another group member named Susan Atkins to pay a visit to an associate named Gary Allen Hinman at his home in Topanga Canyon, just northeast of Malibu. Hinman had been friendly with the Family and had often allowed members to stay at his home. Both Beausoleil and Brunner had previously lived with Hinman for short periods of time and, according to a 1981 interview with Beausoleil, Brunner was close friends with Hinman. Beausoleil had in his possession a knife and a 9 mm Radom pistol that he had borrowed from Family member Bruce Davis.[8]

On July 31, 1969, Hinman was found murdered in his home. His face had been deeply slashed on the left side and he had two stab wounds to the chest. Hinman's house had been ransacked and the words "Political Piggy" written and a paw print (intended to be symbolic of the Black Panther Party) drawn on the wall in his blood. Both of Hinman's vehicles were missing: a Volkswagen van and a Fiat station wagon. On August 5, 1969, Beausoleil was found by the California Highway Patrol asleep in the back of Hinman's Fiat near San Luis Obispo, California. Beausoleil had a sheath knife attached to his belt.[9] Robert Kenneth "Bobby" Beausoleil was arrested and charged with the murder of Gary Allen Hinman.

On August 8, 1969, Brunner and another Family member, Sandra Good, were arrested in San Fernando, California at a Sears store for purchasing items with a stolen credit card. Brunner had signed for her purchases with the alias "Mary Vitasek" and the two women fled the store when a cashier became suspicious. After being followed by the store manager, the police caught up with the two and found them in possession of numerous stolen credit cards and fake identification cards. They were charged with violating Section 459 and 484e of the California Penal Code and booked into the Sybil Brand Institute Reception Center later that evening.[10]

According to former Deputy District Attorney prosecutor Vincent Bugliosi in his 1974 book Helter Skelter, Manson instructed Beausoleil, Brunner and Atkins to go to Hinman's house and demand that he hand over a large sum of money that he believed Hinman had inherited and the titles to Hinman's vehicles.[11] Bugliosi also claimed that at one point during Hinman's two day detention in his home, that Manson himself came to Hinman's house and slashed Hinman's face with a knife when Hinman wouldn't cooperate with his captors and give them the money.[12] This account was later corroborated by various Family members.

According to a 1981 interview with Oui magazine, Beausoleil denied Manson's direct involvement and disputed that either Brunner or Atkins had any direct knowledge of why he was visiting Hinman.[8] Beausoleil contended that he went to Hinman's home in order to confront Hinman and collect $1,000 from him. Beausoleil claimed that he had purchased from Hinman tabs of mescaline that he then sold to a biker gang called the Straight Satans and that several hours after the gang purchased the mescaline from Beausoleil they showed up at Spahn Ranch, claiming the mescaline was poisoned with strychnine, demanded their money back and threatened to kill Beausoleil.[8] Beausoleil contended that both Brunner and Atkins merely went along with him to Hinman's because they "liked" Hinman and wanted to visit. In the interview, he states that neither he nor Brunner nor Atkins were instructed by Manson to go to Hinman's and that he initially had no intention to kill him. This contradicted Beausoleil's own testimony at his first trial in 1969, when he claimed that Manson did in fact instruct him to kill Hinman.

Beausoleil claims that the trio were at Hinman's home less than 24 hours and that "Mary Brunner was just scared to death. She just faded into the woodwork" during the murder, but that Atkins went back into the house after Beausoleil stabbed Hinman and placed a pillow over Hinman's face. He also contended that it was Atkins who wrote the words "Political Piggy" on Hinman's wall (at Beausoleil's instructions).[8]

In October 1969, the police raided the Family's new residence at Barker Ranch near Death Valley, California, holding most of the group in custody on charges of automobile theft. Among those arrested were Atkins, who, while being questioned by police sergeants Whitley and Guenther on October 13, 1969, implicated herself in the murder of Hinman and told the officers that Manson had sent her and Beausoleil to Hinman's residence to force Hinman to hand over money that Manson believed Hinman had inherited.[11] Atkins also told the police that Beausoleil alone acted in the murder of Hinman, stabbing him twice in the heart after being detained in his home for over two days. Atkins also maintained that it was Beausoleil who slashed Hinman's face, not Manson.[11] However, Atkins gave several differing accounts of the murder of Hinman; at times claiming that she killed Hinman, Manson killed Hinman or that Beausoleil killed Hinman. 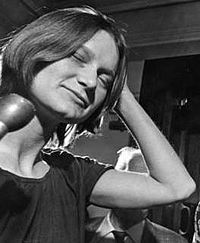 Mary Brunner during the Tate/LaBianca trial.

Mary Brunner and Susan Atkins were subsequently charged along with Bobby Beausoleil with the murder of Gary Hinman. Brunner later received immunity from prosecution to testify against both Beausoleil and Atkins.[13] Even so, Brunner did so very grudgingly. Beausoleil's first trial, which began in November 1969 ended in a hung jury, with Beausoleil claiming that Manson alone had murdered Hinman.

However, during Beausoleil's March 1970 trial, Brunner repudiated her testimony that Beausoleil murdered Hinman and Beausoleil produced an affidavit signed by Brunner stating that he did not stab Hinman. Called to the stand to testify, Brunner eventually repudiated her previous testimony and insisted that she had said Beausoleil stabbed Hinman to death in her attempt to absolve Charles Manson of any participation in the crime.[14] Various former Family members such as Ella Jo Bailey contradicted this testimony and testified that Manson confessed to them that he in fact was present at the Hinman house and that he fully participated in the murder.[15]

Beausoleil was sentenced to death, later commuted to life (See California v. Anderson); Atkins pled guilty for her participation in Hinman's death and was sentenced to life imprisonment. Bruce Davis was charged in the murder after it was learned Beausoleil had called Davis at Spahn Ranch and asked him to come over and pick up Hinman's Volkswagen van. Separate trials were held for the murders of Gary Hinman and Spahn Ranch worker Donald "Shorty" Shea, for Family members Davis, Charles Manson, and Steve "Clem" Grogan.[16]

Brunner subsequently returned to the remaining members of the Family and rallied support for those incarcerated for the Tate/LaBianca murders. Her son Valentine was sent to live with her parents.

On August 21, 1971, Mary Brunner, accompanied by Family member Catherine "Gypsy" Share and several male Family associates — Dennis Rice, Charles Lovett, Larry Bailey, and Kenneth Como — drove a white van to a Hawthorne, California Western Surplus Store. Once inside the store, the group brandished guns and ordered the store patrons and clerks to lie on the ground. They then took 143 rifles from the premises, loading them into their van, while a store clerk tripped the silent alarm. According to police officers, the group then debated whether to kill all of those in the store.[17]

The group's plan was to hijack a Boeing 747 and threaten to kill one passenger every hour until Manson and fellow Family members were released from prison.[17] When a police squad car arrived, Share opened fire on the vehicle, shattering the windshield. As more squad cars arrived, they blocked the van from fleeing the scene, spraying it with over 50 bullets; the Family members fired nearly 20 rounds at the officers. When police finally gained control of the scene and apprehended the group, Mary Brunner, Catherine Share, and Larry Bailey were injured.[13][17]

Brunner and Share were convicted of the crime and incarcerated at the California Institution for Women, where Leslie Van Houten, Susan Atkins and Patricia Krenwinkel were serving their sentences for their participation in the Tate/LaBianca murders. Brunner served just over six years for her participation in the Hawthorne shootout and was released in 1977.[13]

After her release from prison in 1977, Brunner disassociated herself from the Manson Family and regained custody of her son. She subsequently changed her name and currently lives somewhere in the Midwestern United States.[13][18]