Charles Paget (c. 1546–1612) was a Roman Catholic conspirator, involved in the Babington plot to assassinate Queen Elizabeth I of England.

He was also a double agent working for Sir Francis Walsingham.[3]

In 1586, Mary, Queen of Scots, was accused by the British Government of having received and written letters about a plot to assassinate Queen Elizabeth. Paget, was named in Mary's trial as one of the correspondents, and a letter to him dated 17 July 1586 formed part of the evidence at her trial. Queen Elizabeth demanded Paget's extradition from France, and threatened to have him assassinated if he remained.

Early in 1588, Paget moved to Brussels, where he remained for the next eleven years, until 1603, when he returned to Paris after the death of Queen Elizabeth. He was able to recover both his manor at Weston-on-Trent and a pension from King James. He died at the beginning of February 1612,[1] leaving his lands to the sons of one of his sisters, the Roper family.[4] It was Anthony Roper who built the hall at Weston.

Born around 1546, Charles Paget was the younger son of the English statesman William Paget, the first Baron Paget and his wife, Anne, the daughter of Henry Preston. He matriculated at Cambridge University from Caius College in 1559, and was at Trinity Hall, Cambridge when Queen Elizabeth visited the university in August 1564, but left without taking a degree.[5] Around 1581, he went to France, to avoid the religious persecution in England.[1]

Under his father's will he became entitled to the manor of Weston-Aston and other lands in Derbyshire.[2] He was a zealous Roman Catholic, and left England, in discontent with its ecclesiastical constitution, around 1572, and fixed his residence in Paris. There he became secretary to James Beaton, archbishop of Glasgow, who was Queen Mary Stuart's ambassador at the French court. He was soon joined in the office by Thomas Morgan (1543-1606 ?) Morgan and Paget were in constant correspondence with Claude Nau de la Boisseliere and Gilbert Curle, the two secretaries who lived with the queen in England, and they four governed from thenceforth all the queen's affairs at their pleasure.

Paget and Morgan secretly opposed Archbishop Beaton, Mary's ambassador. Beaton was persuaded to allow them to administratier the queen's dowry in France, which was about thirty million crowns a year. They created an alliance with Dr. Owen Lewis in Rome, and disagreed with Dr. Allen and Father Parsons. They were the cause of disagreements among the Catholics[6] Parsons states that the original cause of Paget and Morgan's disagreement with Dr. Allen and himself was their exclusion from a meeting held at Paris in 1582. They were not included at the request of Henry I, Duke of Guise and the Archbishop of Glasgow. The Paris meeting discussed how to put the Queen of Scots back into power and the restoration of England to catholic unity by means of a foreign invasion. After their exclusion from this meeting Paget and Morgan inspired Mary with distrust of Spain and the Jesuits.

During all this time, while apparently plotting against Queen Elizabeth, Paget was acting the part of a spy, and giving political information to her ministers. In 8 January 1581-1582 he wrote from Paris to Secretary of State, Frances Walsingham in these terms :

God made me known to you in this town, and led me to offer you affection ; nothing can so comfort me as her Majesty's and your favour.

In my answer to her Majesty's command for my return to England, assist me that she may yield me her favour and liberty of conscience in religion. . . . If this cannot be done, then solicit her for my enjoying my small living on this side the sea, whereby I may be kept from necessity, which otherwise will force me to seek relief of some foreign prince.

On 23 October 1582 he informed Walsingham of his intention to go to Rouen for his health, and to drink English beer. He professed dutiful allegiance to Elizabeth, and his readiness to be employed in any service, matter of conscience in religion only excepted.

In September 1583 Paget came privately from Rouen to England, assuming the name of Mope. It is alleged that the object of his journey was to concert measures for an invasion by the Duke of Guise and the King of Scots. For a time he hid in the house of William Davies, at Patching, Sussex. On the 8 September he had an interview at Petworth with the Earl of Northumberland. He was afterwards secretly conveyed to a lodge in the earl's park, called Conigar Lodge, where he stayed for about eight days. His brother, Lord Paget, was summoned to Petworth, where Charles and the earl had several meetings. On the 16 September, Charles Paget met in a wood, called Patching Copse, William Shelley,, who was subsequently convicted of treason.[7]

Lord Paget, writing to his brother on 25 October in the same year, said his stay in Rouen was more misliked than his abiding in Paris, considering that he consorted with men like the Bishop of Ross. He added that

he was sorry to hear by some good friends that he carried himself not so dutifully as he ought to do, and that he would disown him as a brother if he forgot the duty he owed to England.

From this letter it would seem that Lord Paget's interview with his brother at Petworth must have been of a more innocent character than has been generally supposed. However, about the end of November Lord Paget fled to Paris, and thenceforward became suspected of complicity in all his brother's treasons. On 2 December 1583, Sir Edward Stafford, the English ambassador to France, wrote from Paris to Sir Frances Walsingham :

Lord Paget, with Charles Paget and Charles Arundel, suddenly entered my dining chamber before any one was aware of it, and Lord Paget says they came away for their consciences, and for fear, having enemies. They also told him that for all things but their consciences they would live as dutifully as any in the world.

After this, Charles Paget, in conjunction with Morgan and other malcontents at home and abroad, continued their plans, which were,, well known to the English government; and in June 1584 Stafford, the English ambassador, made a formal demand, in the name of Queen Elizabeth, for the surrender of Lord Paget, Charles Paget, Charles Arundel, Thomas Throckmorton, and Thomas Morgan, they having conspired against the life of the English queen. The king of France, however, refused to deliver them up, although did imprison Morgan, and sent his papers to Queen Elizabeth. 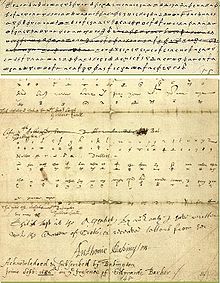 Walsingham's "Decypherer" forged this cipher postscript to Mary's letter to Babington. It was this cipher that Paget in his letter of 31 January had claimed to interpret.

Paget was regarded with the utmost distrust and suspicion by Walsingham, who, in a despatch sent to Stafford on 16 December 1584, says : Charles Paget is a most dangerous instrument, and I wish, for Northumberland's sake, he had never been born. In May 1586 Paget, on account of illness, went to the baths of Spain. He was attainted of treason by act of parliament in 1587.

Although all his plots had signally failed, he appears still to have clung to the idea that the Protestant religion in England could be subverted by a foreign force. Writing under the signature of 'Nauris,' from Paris, to one Nicholas Berden alias Thomas Rogers, 31 January 1587-1588, he observed, in reference to the anticipated triumph of the Spanish Armada :

When the day of invasion happens, the proudest Councillor or Minister in England will be glad of the favour of a Catholic gentleman.

In the same letter he stated that all Walsingham's alphabets or ciphers had been interpreted by him.

In March 1587-1588 he entered the service of the king of Spain, and went to live at Brussels. His name appears in the list of English exiles in Flanders who refused to sign the address of the English fathers of the Society of Jesus.[8]

He continued his correspondence:

I am incited to boldness with you by your favour to my nephew Paget, and the good report I hear of your sweet nature, modesty, and wisdom. I desire ardently to do a service agreeable both to the queen and the king of Spain. I am under obligation to the one as an English subject, and to the other as a catholic prince who has relieved me in my banishment.

His Highness ' was willing to treat with allies, and particularly with the queen, that the crowns of England and Spain might return to their old amity[9]

On 27 April 1598 he wrote from Liege to Thomas Barnes in London: I am unspeakably comforted that the queen inclines to listen to my humble suit. The profits of my land are worth £200 a year to myself; it is a lordship called Weston-upon-Trent. ... I cannot capitulate with the Queen; but the greater my offence has been, the greater is her mercy in pardoning and restoring me to my blood and living, showing the liberality which makes her famous, and obliging me to spend my life at her feet.[10]

Paris and the Scottish faction

The English Catholic exiles eventually split into two parties: one, called the Spanish faction, supporting the claims of the infanta to the English crown; while the other, denominated the Scottish faction, advocated the right of James VI of Scotland. Paget was the acknowledged head of the Scottish faction, and in 1599 he threw up his employment under the King of Spain, and returned to Paris.[11] Among the State Papers[12] is a letter from a Catholic in Brussels to his friend, a monk at Liege, giving a detailed account of Paget and his "practices." The writer says that from the first hour that his years permitted him to converse with men, he has been tampering in broils and practices, betwixt friend and friend, man and wife, and, as his credit and craft increase, betwixt prince and prince.

Animated by intense hatred of the Spanish faction, Paget lost no time after his arrival at Paris in putting himself in communication with Sir Henry Neville, the English ambassador, who forwarded a detailed account of the circumstances to Sir Robert Cecil in a despatch dated 27 June (O.S.) 1599. Cecil seems to have been by no means anxious to encourage Paget, but Neville was more favourable to him. Paget said he felt himself slighted by the English government, but he nevertheless seems to have given from time to time important intelligence to Neville and to Ralph Winwood the succeeding ambassador at the French court. His attainder appears to have been reversed in the first parliament of James I, probably by the act restoring in blood his nephew William, Lord Paget, and it is presumed that he returned to England. His paternal estate, including the manor of Weston on Trent and other manors in Derbyshire, was restored to him on 13 July 1603; and on 18 August in the same year James I granted him £200 per annum,[13] part of a fee-farm rent reserved by a patent of Queen Elizabeth, bestowing the lands of Lord Paget on William Paget and his heirs. He died, probably in England, about the beginning of February 1611-1612, leaving a good estate to the sons of one of his sisters.