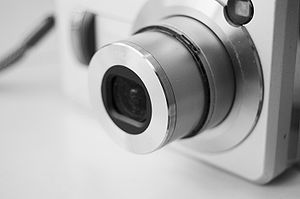 A Casio point & shoot camera, this is an instance of digital camera 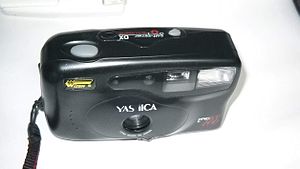 A Yashica point & shoot camera, this is an instance of film camera

A point-and-shoot camera, also called a compact camera, is a still camera designed primarily for simple operation.[1] Most use focus free lenses or autofocus for focusing, automatic systems for setting the exposure options, and have flash units built in.

Point-and-shoots are by far the best selling type of separate camera, as distinct from camera phones. They are popular with people who don’t consider themselves photographers but want an easy to use camera for vacations, parties, reunions and other events.

The term "point-and-shoot" is also used for some camcorders, particularly inexpensive digital models based on MiniDV or DVD media, to describe fully automatic operation (autofocus, automatic gain control and white balance, etc.) with minimal operator interaction except for zoom control and recording buttons.

As distinct from SLR

Point-and-shoot cameras are distinguished from single-lens reflex cameras (SLRs) in several respects: point-and-shoot film cameras, and many digital ones, use a viewfinder. The image that the photographer sees is not the same image that passes through the primary lens of the camera (that is, the lens that projects the image onto the film or, in the case of digital cameras, the image sensor). Rather, the image in the viewfinder passes through a separate lens.[2] SLRs, on the other hand, have only one lens, and a mirror diverts the image from the lens into the viewfinder; that mirror then retracts when the picture is taken so that the image can be recorded on the film or sensor. With this mechanism, pictures cannot be previewed on the LCD screens of most digital SLRs, although some manufacturers have found a way around this limitation. Digital cameras obviate the need for the SLR design to some degree, as the camera's LCD image is obtained through the lens, not a separate viewfinder. Many newer and smaller digital point-and-shoots omit the optical viewfinder.

With SLR cameras, it is important that the image in the viewfinder be the same image recorded by the film or sensor, so that the effect of the add-on lenses and filters can be seen by the photographer. Point-and-shoot cameras generally don't have such add-on devices, hence no such need.

The size limitations of compact and ultra-compact cameras, including digital ones, encourage the occurrence of photographic orbs — unexpected, typically circular artifacts that occur in flash photographs — where the short distance between the lens and the built-in flash decreases the angle of light reflection to the lens, directly illuminating the aspect of the normally sub-visible particles facing the lens and increasing the camera's ability to capture the light reflected off the particles.[3]

The lowest-end point-and-shoot film cameras are similar to disposable cameras, but can be reloaded. These cameras have focus-free lenses, with fixed apertures. They may or may not have a light meter. Most have a wheel or lever for advancing the film and cocking the shutter, and a crank for returning the film to the canister for unloading. Because of the fixed apertures, models with flash have no way of controlling the exposure from the flash. Therefore flash pictures have to be taken within a narrow range of distance from the subject.

Advanced models use automatic focus and have variable apertures. They all have light meters. They use electric motors to advance and rewind the film. They are much more versatile than the low-end models. They are also likely to have zoom lenses, more advanced auto-focus systems, exposure systems with manual controls, larger apertures and sharper lenses. They may have special lamps or pre-flash systems designed to reduce red eye in flash pictures of people.

Not including digital backs, the first digital cameras were of this type, with DSLRs coming later. The image sensor used in digital point-and-shoots tends to be smaller than their DSLR counterparts. The non-interchangeable lenses allow the coverage of the lens to be matched to the sensor, an advantage given the non-standardization of sensor sizes. Low end digital cameras lacking zoom, autofocus and flash are less common, their niche having been taken by camera phones.

Most film-based point-and-shoots made after the late 1980s use 35mm film. In the 1980s, 35mm was seen as a "professional" format due to the relative difficulty of loading and rewinding the film versus cartridge based formats such as 110 or disc film. The key innovations that made 35mm point-and-shoot cameras possible were automatic film loading and automatic advance and rewind. Advanced Photo System film was mildly popular in the 1990s. 126 film was also popular during the 1970s.