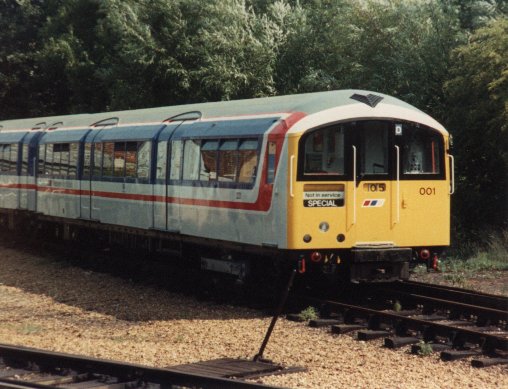 Nine two-car units were refurbished, numbered 483001-009, although only the final three digits were carried on the cab ends. Units were painted in the new livery, of blue with red and white stripes. A tenth unit, was also shipped to , although this was for spares only and was never used in passenger operation on the Island. This unit was unofficially given the unit number 483010.

Each unit was formed of two driving motor vehicles, numbered 121-129 and 221-229. The technical description of this formation was DMSO(A)+DMSO(B).

In 1996, with the privatisation of Britain's railways, the Ryde-Shanklin became part of the Island Line franchise, which was won by the . Services were branded as Island Line. In the late 1990s several units were withdrawn from service as surplus to requirements. From 2000 onwards, the remaining units were overhauled, and most repainted into a new livery of blue and yellow, with pictures of dinosaurs. Two units, nos. 007 and 009, were later repainted into their original London Transport red livery, (albeit with yellow warning panels on the cab rather than the original red), and from 2007, the rest of the fleet is being painted into this livery.

In 2007, Island Line was amalgamated with as part of the new South Western Franchise. However, there are no plans to replace the rolling stock on the Isle of Wight [cite web|url=http://www.southwesttrains.co.uk/SWTrains/News/_FranchiseWin.htm|title=Stagecoach Group welcomes South Western Rail Franchise win|date=|accessdate=2008-04-28|publisher=] , despite a large amount of newer London Underground rolling stock soon to be available.

Five of the nine units remain in service, the majority of the others having been taken out of service in the late 1990s.