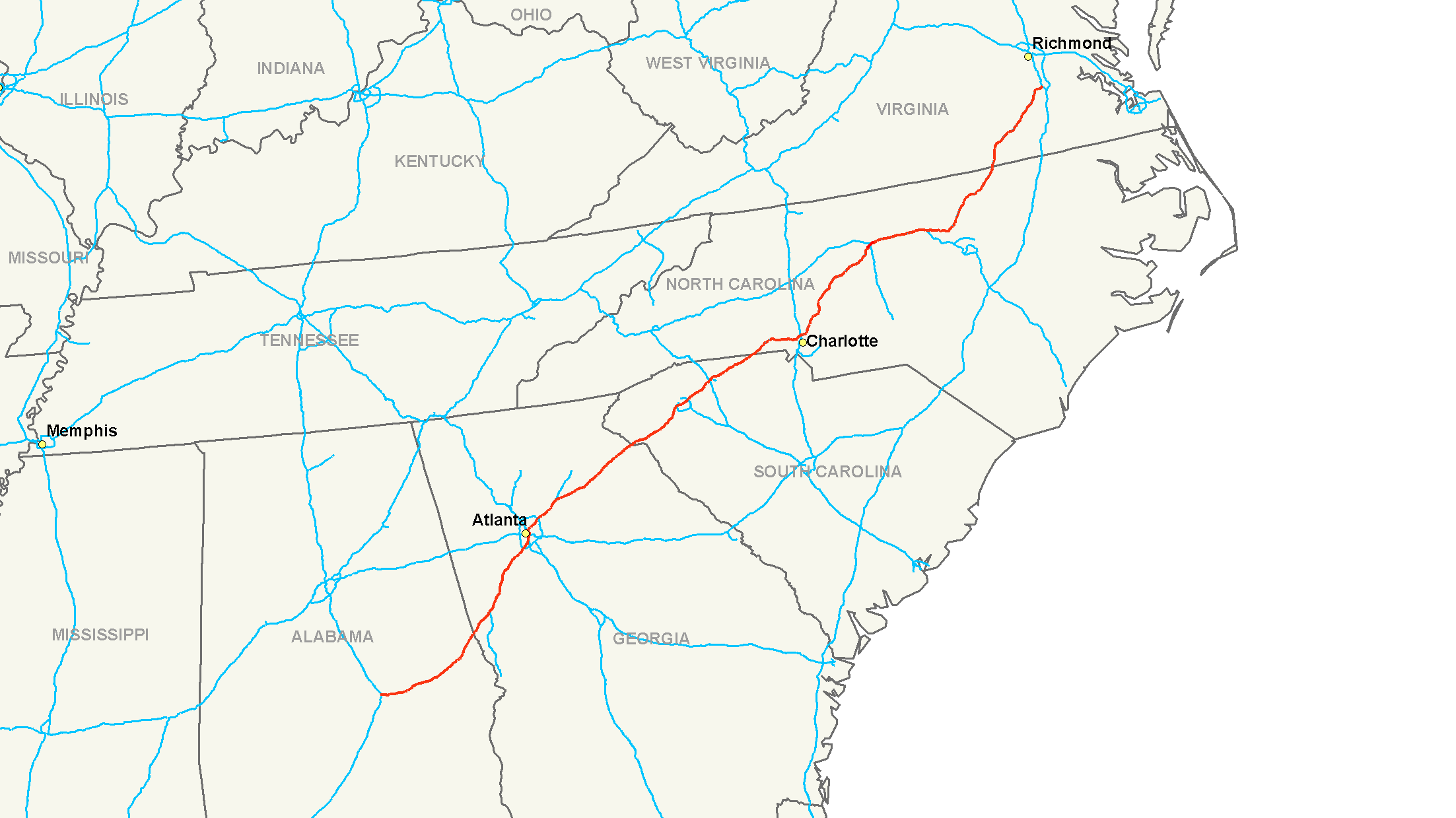 An addition to Interstate 85 is proposed which will extend the route west from to just east of the state line. [, [http://www.i85extension.com/ I-85 Extension Corridor Study & EUIS] ]

Interstate 85 begins as a fork off in Montgomery. From here, I-85 parallels until the highway nears Tuskegee. At Tuskegee, I-85 leaves U.S. 80 and starts to parallel , which the highway parallels for much of its length.

I-85 also passes near Auburn, Opelika and Lanett before crossing the into Georgia.

In Georgia, Interstate 85 bypasses West Point before coming into the LaGrange area. East of LaGrange, I-85 intersects . Travelers can take I-185 to Columbus and Fort Benning. Travelers can also see the construction of 's multi-billion dollar plant in West Point, just a few miles south west of LaGrange.

I-85 in Georgia is secretly designated — but not signed as - State Route 403.

From LaGrange, I-85 heads northeastward towards Atlanta. Before reaching Atlanta, the highway passes the suburbs Newnan, College Park and East Point as well as intersecting and providing access to . On the south side of the city, I-85 merges with to form the . Just before downtown, the highway goes through a pile-up intersection with . Afterward, the two highways go through the heart of the city until they split just north of Georgia Tech. I-75 heads northwest while I-85 heads northeast. However, at the exit, I-75 drivers must take the right three lanes while I-85 motorists must use the left three lanes.

Continuing northeast of Atlanta, Interstate 85 continues through the northeastern suburbs, bypassing Chamblee and Doraville, where there is another intersection with I-285 (nicknamed Spaghetti Junction).

Continuing northbound, drivers will see another interstate spur - , which provides a link to Gainesville - before heading through northeastern Georgia. At - which was formed by the damming of the - I-85 crosses into .

Interstate 85 provides the major transportation route for of , linking together the major centers of Greenville and with regional centers of importance.

In South Carolina, Interstate 85 bypasses Clemson and Anderson on the way to Greenville. Beginning at Anderson, I-85 widens from four to six lanes. Near Powdersville, U.S. 29 joins I-85 and they run concurrently until they cross the .

Interstate 85 bypasses just south of Greenville, but provides two links into the city via spur routes Interstates 185 and 385. U.S. 29 splits from I-85 and joins I-185 toward downtown Greenville. I-185 recently saw a major expansion as a toll road south of the city as the Southern Connector was completed. In this section, the roadway is six to eight lanes wide, depending on the location.

Much of the Upstate's industrial, institutional, and commercial base is located along I-85, especially with regards to the growing automotive industry. The North American headquarters for , along with a major assembly plant, and the new International Center for Automobile Research are all visible from the road. Additional companies have major operations along this corridor, including , Sara Lee, Hitachi, and . I-85 also bypasses , which serves the Greenville-Spartanburg metropolitan area.

Instead of going into Spartanburg, I-85 bypasses the city to the north. Its original route is now signed Business Loop 85 and was approved by AASHTO on April 22, 1995. [ [http://www.interstate-guide.com/i-085.html Interstate 85@Interstate-Guide.com] Courtesy AARoads. Retrieved 27 May, 2007.]

North of Spartanburg, I-85 narrows from six lanes back to four lanes and bypasses Gaffney. At Gaffney, motorists can see The , a large water tower with its top shaped like a , which is one of the state's most important crops.

Much of the terrain between Spartanburg and the North Carolina border is rural in nature.

In North Carolina, I-85 merges with I-40 from Greensboro to Hillsborough, just west of Durham. In Alamance County, the highway is also known as the Sam Hunt Freeway.

Immediately upon coming into , drivers will realize that is still 45 minutes away. This is because Interstate 85 takes a more west to east routing along with and , nears Kings Mountain.

Drivers will go through Gastonia and will eventually reach Charlotte with the option to bypass using .

In Charlotte, I-85 bypasses and turns northeastward just before reaching downtown Charlotte; thus I-85 just bypasses downtown to the north.

The junction between I-85 and north of downtown Charlotte is a strange configuration. While I-85 passes under I-77, the northbound lanes of I-77 are to the west of I-77's southbound lanes. The travel lanes on I-77 return to their proper positions north and south of this interchange.

North of Charlotte, the highway passes near Concord, where one can see the . There is much dedication to the Earnhardt family as there are many roads named using his name, such as Dale Earnhardt Boulevard and .

At milepost 98, the northbound lanes of I-85 cross under the southbound lanes, and cross back to the correct configuration near milepost 102. This results in motorists driving to the left of opposing traffic for approximately three miles (5 km). The switch is not very noticeable, because the roadways are separated by up to 400 feet (123 m) of woods in this area. A rest area and Vietnam Veterans memorial are located in the median of this section, so the crossover allows for all exits into the rest area to be normal right-hand exits.

Continuing northbound, I-85 passes though or near Salisbury, Lexington and High Point before reaching Greensboro. At Greensboro, I-85 shifts to its to a new routing, away from downtown. At Exit 120, Business I-85 (old I-85 through town) exits and begins its short overlap with I-85, leaving at Exit 122 (although the two interstates never share the same alignment). I-85 intersects with a new I-73 freeway for travelers bound westward towards Winston-Salem (via I-40). The former I-85 routing nearest downtown Greensboro (now Business I-85/I-40 (Business 85 joins I-40 at "Death Valley")) is also notorious for many traffic accidents and earned the above mentioned nickname "Death Valley". (Until September 2008, I-40 departed from I-85 at Exit 120, and its former — and once again current — alignment was signed as Business 40.)

At Exit 131, I-85 joins I-40 east of downtown, and the two highways are cosigned as they pass through Burlington, Graham and Mebane then separate near Hillsborough. Interstate 85 continues to Durham while turns toward Chapel Hill and Raleigh.

Around this area, one can visit the and in Durham.

From Durham, I-85 turns northeastward and heads toward . Until replaced during a recent upgrade, signs for Richmond used to exist in this part of North Carolina even though the end of the road is in Petersburg, Virginia.

Starting from the border, drivers will pass South Hill and McKenney before heading into a large forest of trees. After the forest, Interstate 85 reaches Petersburg and ends at Interstate 95. The highway is briefly cosigned with from a few miles west of Petersburg in Dinwiddie County to I-95.

I-85 was rerouted around Greensboro in 2004; and it split with I-40 eight miles (13 km) east of the original departure point. I-40 ran with I-85 along the bypass to the southern/western end and I-40 continued on a new freeway alignment at Exit 121 until September 2008, when it was rerouted back to its old alignment through the city. Despite its reroute around Greensboro, the overall length for I-85 in North Carolina (233 miles/373 km) remains the same as before.

There is currently a plan by Alabama state transportation officials to extend I-85 across western , where it will connect with near . This extension will roughly follow the route of U.S. 80, going through or bypassing Selma and Demopolis. [Hinnen, Jerry. [http://www.demopolistimes.com/articles/2005/01/18/news/news02.txt Shelby shares views with Hale, Greene counties] Posted by the Demopolis Times, 17 January, 2005.] This section is also envisioned by some as part of a proposed .

Interstate 85 is scheduled to have several new auxiliary routes in the future. Interstate 285 is also planned to follow part of the freeway from Lexington to Winston-Salem, both in North Carolina. is currently planned by the North Carolina Department of Transportation to run from Greensboro to . The proposed route would follow the current U.S. 29 corridor.

* [http://www.i85extension.com/ I-85 Extension Corridor Study] - Corridor study and environmental impact statement by the Alabama Department of Transportation and the Federal Highway Administration.