Bobby Bowden Field at Doak Campbell Stadium is the football stadium on the campus of the Florida State University in Tallahassee, Florida. It is the home venue for the university's football team, nicknamed the Seminoles. The stadium was named for Doak S. Campbell, the president of the university at the time of its construction, and the field was named for legendary head football coach Bobby Bowden. The stadium is part of the University Center complex, a mixed-use facility encompassing university office space, university classrooms, the university's Visitor's Center, souvenir store, The University Center Club, as well as skyboxes and press boxes for use during football games. Following the latest expansion in 2003, the stadium has a seating capacity of 82,300, making it the fourteenth largest stadium in the NCAA, the largest football stadium in the ACC and the largest continuous brick structure in the United States. On November 20, 2004 in accordance with an act of state legislation, the stadium and field were renamed Bobby Bowden Field at Doak Campbell Stadium.[3] Prior to the start of the 2007 Season a new state-of-the-art sound and public address system was installed. Before the 2008 Seminole Football Home Season two new HD Scoreboards were installed. The main one in the north endzone measures over 100 ft (30 m), the south endzone has a 45-foot (14 m) scoreboard. Six new LED ribbon boards were installed in each of the four corners of the stadium as well as underneath the north scoreboard, over the player entrance and above the entrance used by the Marching Chiefs. The new boards allow for more game stats and more information on other games in addition to improved replay viewing. 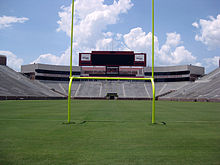 "A view of the north end zone"

Game night against Wake Forest in 2008

The stadium, named after FSU President Doak Campbell, hosted its first game against the Randolph-Macon College Yellowjackets on October 7, 1950 with the Seminoles winning the game 40–7. At that time the facility had a seating capacity of 15,000. Florida State began to play at Centennial Field during the team's 1947 season and would continue to play there for the following two years (1948 and 1949). Florida State College - FSU predecessor institution - also fielded teams from 1902-1904 (precise location of where games were played is not documented). Doak Campbell Stadium, with its original capacity of 15,000 in 1950, was built at a cost of $250,000. In 1954, the stadium grew to a capacity of 19,000. Six thousand more seats were added in 1961. During the Bill Peterson era (1960–70), the stadium was expanded to 40,500 seats, and it remained at that capacity for the next 14 years. Since that time, the stadium has expanded to 82,300, largely in part to the success of the football team under head coach Bobby Bowden coupled with the ever growing student body. It now is the largest football stadium in the Atlantic Coast Conference (ACC). Aesthetically, a brick facade surrounding the stadium matches the architectural design of most of the buildings on the university's campus. In addition to the obvious recreational uses, The University Center surrounds the stadium and houses many of the university's offices. The field was officially named Bobby Bowden field on November 20, 2004 as Florida State hosted intrastate rival Florida.[3] The FSU Warchant began during the Auburn game in 1984 and has since spread to be used by fans of the Atlanta Braves and Kansas City Chiefs. [4]

A 19 foot (5.8 m) tall bronze sculpture by Fritz White depicting Chief Osceola and Renegade. A tradition was immediately put in place whereby at sunset, on the night before home football games, as the Marching Chiefs play, Osceola's spear is set aflame as students, alumni, and fans gather around the statue to show their support. The flame is later extinguished at sunrise on the morning following the game. As of March, 2006, the university decided to light the spear for several reasons, including: selection into the NCAA basketball tournament, "National Player of the Year" awards for any sport, conference championships, graduations and convocations, etc.[5] A small inscription near the base of the statue reads: "This statue does not depict any particular person or event. Rather, it symbolically portrays the unconquered spirit of the Seminole people of the 19th century and the timeless legacy of that spirit that continues to burn bright into the future.". The statue was unveiled at the Williams Family Plaza on October 10, 2003, and "Unconquered" was engraved in its stone pedestal on September 2, 2005.

A bronze sculpture by Edward Jonas, is a 15-foot (4.6 m) tall statue depicting a standing football player extending his arm to help pick up a fallen rival on the field. In 2002 the statue was selected by the National Sculpture Society to be showcased in its special exhibit "Sports Sculpture." A one-quarter life size scale model represented the sculpture in the New York exhibition. The statue is located at the Al D. Strum Plaza.

A 9 foot (2.7 m) tall bronze statue of head football coach Bobby Bowden, created by W. Stanley "Sandy" Proctor, was unveiled outside of the Coyle E. Moore Athletic Center on September 25, 2004 and was dedicated along with the Les and Ruth Akers Plaza. 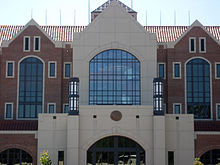 A three-story, stained-glass window commemorating the naming of the field was unveiled on November 20, 2004, the day of the annual Florida State/Florida game. The window depicts Bowden overlooking the field among a sea of fans in the stands. The 30-by-20-foot window was installed over the entrance of the Moore Athletic Center. Created by Florida State artist Robert Bischoff, his wife, JoAnn, and 12 Florida State students in the Master Craftsman Program, the window is among the five largest stained glass windows in the United States.[3]

This new addition to the outside of the stadium was unveiled on Friday, October 20, 2006. The statue was designed by Brad Cooley, Sr. and Brad Cooley, Jr. of Lamont, Florida. Known as "Seminole Family in Bronze", the statue shows what may have been a typical Seminole family around the time of the Seminole Wars in the 1800s.[6]

Doak Campbell Stadium is a unique venue in collegiate football. It is contained within the brick facade walls of University Center, a vast complex that houses the offices of the University, the Registrar, School of Hospitality as well as numerous other offices and classrooms.

Building A houses the offices of the Registrar, Financial Aid, Admissions and Dean of Students. The Award Winning Film School is Located in the 2nd wing of Building A. The top two floors are home to Skyboxes.

Building B holds the Seminole Sportshop as well as Visitor Services. UCB is also home to the University Center Club and to the Osceola Sports Grill, marketed as "the ultimate way to watch a Seminole Football game." The Dedman School of Hospitality is located on the second floor of Building B.

Building C is home to the College of Communication, Florida State Testing Center as well as the College of Social Work. The Athletics Ticket office is also located here as are many of the offices of Seminole Boosters. Floor nine is home to the Press Boxes with two floors of Skyboxes below.

Located on the North Side of Doak Campbell, the athletic center houses nearly all of the athletic offices as well as some classrooms and lecture halls. Visitors are welcomed into the Great Hall showcasing the Seminole Athletics awards such as the two National Championship Football trophies.