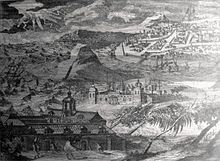 Foundation of the Seminary of Saint Joseph in Ayutthaya, Siam, in 1665.

The College General (Malay: Seminari Tinggi Katolik) is a Roman Catholic seminary located in Tanjung Bungah, Penang, Malaysia. The college's foundation can be traced back to the 1665 establishment of the Seminary of Saint Joseph in Ayuthia which was then the capital of Siam (now Thailand). 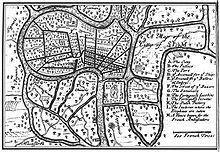 The Seminary (letter "G") was located in the western part of Ayutthaya, in the Cochinchinese quarter.

The College General traces its history to the establishment of theSeminary of Saint Joseph in Ayuthia, Siam in 1665 by the Vicars Apostolic Bishops Pallu and Lambert de la Motte of the Paris Foreign Missions Society. They officially requested the establishment of the Seminary to the Siamese king Narai on 25 May 1665, who granted them a large spot on the river Menam, and the Cochinchinese quarter named "Banplahet".[1] King Narai requested that ten Siamese students be incorporated in the Seminary so as to learn European knowledge. Otherwise, the students of the Seminary came from Goa, Macao, Cochinchina and Tonkin.[1] In 1675, Mgr Louis Laneau, who had been nominated Vicar Apostolic of Siam two years before, became Superior of the Seminary.[1]

Among the first two priests that graduated was François Pérez (Francis Perez), born of a Manila father and a Siamese mother, who was later consecrated a bishop and named Vicar Apostolic of Cochin-China in 1691.[1][2]

In 1680, the Seminary was moved to a larger location in Mahapram, also near Ayutthaya, and was named Seminary of the Holy Angels.

The Burmese invasion of Ayuthia in 1765 forced the relocation of the seminary to Chanthaburi and later to Hon Dat in Cambodia (now in Vietnam). Pigneau de Behaine, who was to have a great destiny in Vietnam, was put in charge of the Seminary.[4]

The political instability of that period resulted in the seminarians to live in poverty and although a new building was built, it was razed to the ground by rebels. The deteriorating political situation and constant persecutions forced the search for a more tranquil location for the seminary.

India was chosen and in 1770, 2 professors and 41 seminarians arrived at Pondicherry, India by sea after stopping for 2 months in Melaka. The Seminary was established at Virampatnam.[4]

Despite its peaceful calm, Pondicherry proved unsuitable as it was too far from China and Indo-China where most of the seminarians came from. As a result, the seminary was temporary closed in 1782 until a more suitable place could be found.[2]

The island of Penang, a British colony since its occupation by Francis Light in 1786 was eventually chosen due to its political stability and geographical proximity to the other mission lands. In 1808, a new Superior, Fr. Lolivier arrived with 5 seminarians from Macau and the seminary was revived with its current name the following year in Pulau Tikus, Penang with 20 seminarians from China. The college had prominent members take on the role as teaching staff, including Laurent-Marie-Joseph Imbert and Jacques-Honoré Chastan who served from 1821–1822 and 1827-1830 respectively. Both were martyred in Korea and later beatified in 1925 by Pope Pius XI. Both were canonised in 1984 by Pope John Paul II. The college also was a sanctuary for the Vicar General of Annam and scores of seminarians during the persecutions of 1834-35 and among the number included Philip Minh Van Doan who was martyred and later canonised in 1988.[2]

In 1885, the buildings were expanded to cope with the additional seminarians that came to Penang due to persecution in other territories in the region. With peace returning, enrollment was reduced with a large majority of the seminarians coming from the newly established missions in Rangoon and Mandalay in Burma.[2]

Rectors of the College General

The is a list of rectors who have served the College General since it was revived in Penang in 1808.[5]

Many of the college faculty and alumni were martyred over the years and some have eventually been canonised [8][9]:

The college has produced many notable alumni both in the religious and secular vocations [16][17]: 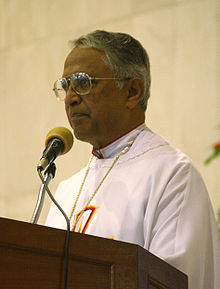