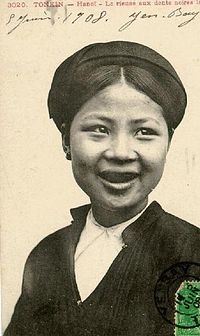 Tonkin (Bắc Kỳ in Vietnamese), also spelled Tongkin, Tonquin or Tongking, is the northernmost part of Vietnam, south of China's Yunnan and Guangxi Provinces, east of northern Laos, and west of the Gulf of Tonkin. Locally, it is known as Bắc Kỳ, meaning "Northern Region". Located on the fertile delta of the Red River, Tonkin is rich in rice production.

The area was called Văn Lang by Vietnamese ancestors at around 2000-100 BCE. Evidence of the earliest established society other than the Đông Sơn culture in Northern Vietnam was found in Cổ Loa, the ancient city situated near present-day Hà Nội. According to Vietnamese myths the first Vietnamese peoples descended from the Dragon Lord Lạc Long Quân and the Immortal Fairy Âu Cơ. Lạc Long Quân and Âu Cơ had 100 sons before they decided to part ways. 50 of the children went with their mother to the mountains, and the other 50 went with their father to the sea. The eldest son became the first in a line of earliest Vietnamese kings, collectively known as the Hùng kings (Hùng Vương or the Hồng Bàng Dynasty). The Hùng kings called the country, which was then located on the Red River delta in present-day northern Vietnam, Văn Lang. The people of Văn Lang were referred to as the Lạc Việt.

Lê Lợi (reigned 1428–1433), a notable land owner in the Lam Kinh region, had a following of more than 1,000 people before rising up against the Chinese Ming regime. Following his victory he mounted the throne and established himself in Thang Long ('Ascending Dragon'), the old capital of Vietnam since the 7th century, now Ha Noi. Thang Long was also called Đông Kinh (東京), meaning 'Eastern Capital'. (東京 is identical in meaning and written form in Chinese characters to that of Tokyo).[1] 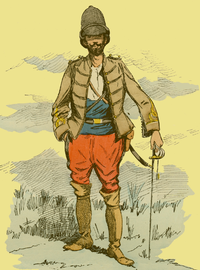 After the Sino-French War (1884–1885), Tonkin came under French sovereignty, all of Vietnam was now governed by the French. During the French colonial administration, Vietnam was administratively divided into three different territories. The territories were: Tonkin protectorate (in the North), Annam protectorate (in the center), and the colony of Cochinchina (in the south). These territories were fairly arbitrary in their geographic extent, the vast majority of the Vietnamese regarded their country as a single land and fought for much of the next 70 years to achieve an independent state. Effective French colonial administration lasted until World War II, when French Indochina was occupied by Japan. At the end of the war, the Allies had the surrender in the North taken by China and in the South by the British. This was decided by Harry Truman at the Potsdam Conference, stating an intention to hand the region back to French rule. However, immediately after the Japanese were defeated in World War II, Ho Chi Minh proclaimed the establishment of the Democratic Republic of Vietnam in Ba Đình Square. After the Viet Minh army had defeated the French at the battle of Dien Bien Phu (in Western Tonkin) in 1954, the republic transformed into what became known as North Vietnam, consisting of Tonkin and North-central Vietnam.